In 2017, Bitcoin Was the 9th Most Read Article But It’s No Surprise!

We have left no stone unturned to gather more information as it comes about Bitcoin (BTC) and cryptocurrencies. Each week conflicting reports surface from around the globe stating that Bitcoin is either the future or the demise of the financial system. As a result, it can be difficult for investors to determine whether Bitcoin is a buy or a sell.

Bitcoin is not anymore a new concept to people. Even if it is, people turn to the internet and find informative insights about it on Wikipedia, which is one of the most trusted encyclopedias.

The 2017 edition of the annual ‘Top 50 Report’ of Wikipedia shows that Bitcoin stands as ninth most-read article on the digital encyclopedia for last year.

A witty and poetic entry written by Wikipedia Senior Editor JFG, BTC is described as something that is the highly speculative and intangible goes as follows,

“For our dear readers who can’t make heads or tails of this novelty: Bitcoin is as good as gold, shinier than lead, bubblier than tulips, held deep in the mines, and driving people nuts.

Gold has enriched adventurers and [B]itcoin has held fools to ransom. You may dive in a pool of gold, but lose it all at war. Strangely, while you can still buy gold today and forget about it until your great-grandchildren cash it out, the much-hyped “future of money” has turned into the most speculative intangible asset of all time, while proving totally unsuitable as a means of payment. Still, over 2017 at least, [B]itcoin would have been a better investment than Tesla stock.”

Wikipedia reported that got a total of over 15 million views, less than a million short of the views for the entry on the US. The list shows that BTC was far more read about on Wikipedia than Wonder Woman, 2.6 million more than Dwayne ‘The Rock’ Johnson, Elon Musk. 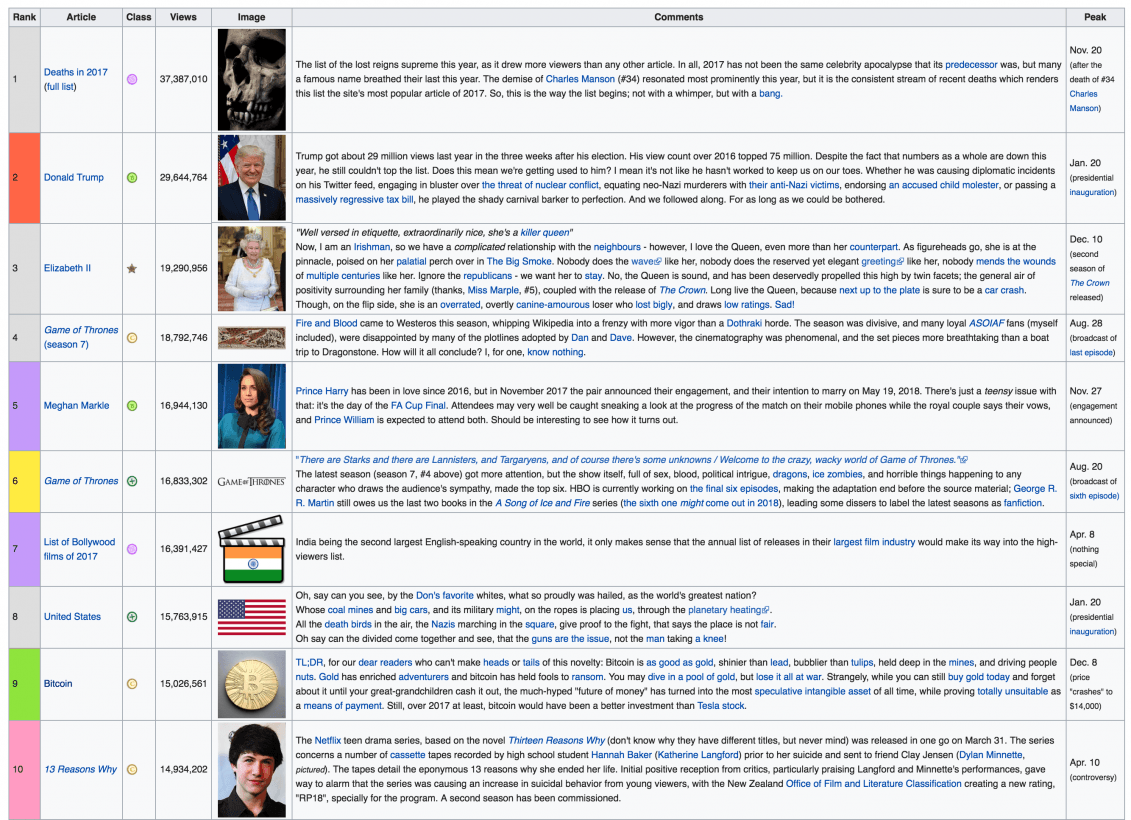 With the BTC fall in 2018, and now rallying up, it is yet to be seen if it is still able to maintain or go up the record of it’s 50th read rank on Wikipedia. However, it can be expected that Bitcoin may break its own record of 2017 only to rise the rank charts in 2018.