0
SHARES
70
VIEWS
Share on FacebookShare on Twitter
The once face of Cryptocurrency in India, Amit Bharadwaj, has been nabbed in Thailand. Bharadwaj was the founder of GainBitcoin which duped many people out of their money to gather as much as $300 million (INR 2000 Crore).

The Indian government had to collaborate with the government of Thailand to bring him back into the country. At the moment, he is enroute to Pune. Only a few hours back, Pune Police has confirmed this news, by sharing a tweet on the said news. 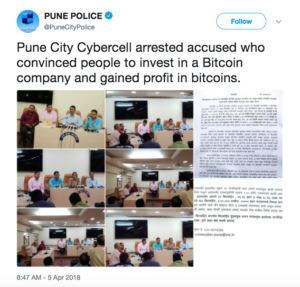 Amit Bharadwaj was also reported to have terrorist links, notably with the ISI.

An investor who put is money in Amit Bhardwaj’s said Ponzi Scheme, said,

“He said the mining pool of the Company is in China and for every contract, we buy by paying 1 Bitcoin, the Company would pay us 0.1 BTC for 18 months. But we never got any Bitcoins even after 18 months “

But the biggest fraud is in the valuation of MCAP. The company values MCAP token many times higher than the market price.

This arrest should definitely come as a warning to the fraudulent people who try to mislead the people and swindle people through their deceptive schemes.