ADA/USD Bulls Are Likely to Hold Steady Past $0.095 Awaiting a Fresh Impetus for the Next Push Higher

As per recent activity, Cardano (ADA) is one of the top crypto market leaders. The digital asset may be ready to resume upside move as its surrounded by a steady flow of positive fundamental developments. Cardano established a new 2020-high on July 27 at $0.171 and its down 50% since its peak while it’s currently trying to recover. After bottoming at $0.075 September low, near-term ADA/USD activity may lift bulls past MA 50 barrier. The outlook for Cardano is becoming optimistic as several indicators are forecasting a potential breakout. ADA/USD bulls are likely to hold steady past $0.095 awaiting a fresh impetus for the next push higher. The market cap is ranked 10th on the Coinmarketcap table and currently stands at $3.17 billion, with $609 million in trade volume over the past 24 hours. ADA tokens have climbed approx. 3.0% in its USD pairing within the last 24hrs to trade during the time of this post at $0.096. SingularityNET, a blockchain-based marketplace for AI services, doesn’t rule out ditching Ethereum for Cardano after partnering with IOHK. The proposed dump comes from a recent announcement on September 30 to port a significant portion of the SingularityNET decentralized protocol and platform from Ethereum to Cardano.

*ADA/USD bulls are likely to hold steady past $0.095 awaiting a fresh impetus for the next push higher
*After bottoming at $0.075 September low, near-term ADA/USD activity may lift bulls past MA 50 barrier
*SingularityNET, a blockchain-based marketplace for AI services, doesn’t rule out ditching Ethereum for Cardano after partnering with IOHK 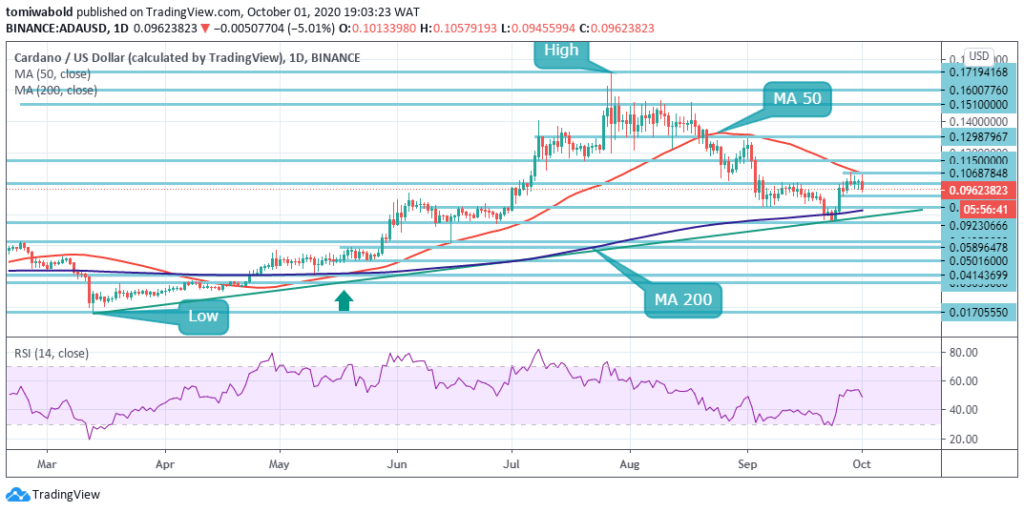 ADA was trading higher in the early trading session on Thursday as traders piled up behind the token over its optimistic fundamentals. There were continuous increases from the swing low at $0.075 of September 23 in Cardano price against the US Dollar. The price has gone ahead to test the MA 50 barrier at $0.106 in an attempt to breach higher.

Since hitting the MA 50, ADA/USD has dropped from $0.106 to $0.094 intraday low as it seems that some indicators are starting to shift in favor of the bears. ADA/USD has broken past $0.10 earlier and may retest the $0.106 resistance in the near term which shows strength supported by its long-term uptrend with only the medium-term trend being bearish.

As seen on the 4-hour time frame, a move above the psychological $0.10 level is a significant improvement for the token. If this breakthrough is sustained, then buying could speed up above the nearby swing high at $0.106 where further buy stops might get triggered. The upside momentum may continue gaining traction with the next focus on $0.129.

XRP Price Analysis: Bulls Soften on XRP/USD Towards $0.25 As PayPal Excludes Ripple (XRP) From Its List of Tokens