The crypto market bull run continues to gain traction as BTC traded to highs above $57k. Cardano has been in an uptrend since the start of February, attaining highs of $0.9820 on Feb 11. However, this was followed by a period of consolidation and minor pullback. Cardano resumed the uptrend on Feb. 15 when it hit support at $0.6862. Cardano steadily climbed higher, trading six days consecutively in the green. Cardano’s breakout occurred today in a single candle as it breached above the $1 psychological level. Cardano has since gained 21.56% in the last 24 hours and 24.40% on a 7-day basis while setting intraday highs of $1.15. At the time of writing, Cardano is exchanging hands at $1.10 as the ADA/USD pair sets for an explosive rally past $1.15. Ranking 5th largest, ADA’s present market capitalization stands at $34.64 billion and a total of $8.05 billion in trade volume over the past 24hrs. Rock Star Gene Simmons endorses Cardano. Simmons, in a series of tweets, hinted at his bullish stance on ADA due to its affordability while confirming his acquisition of $300,000 worth of ADA. 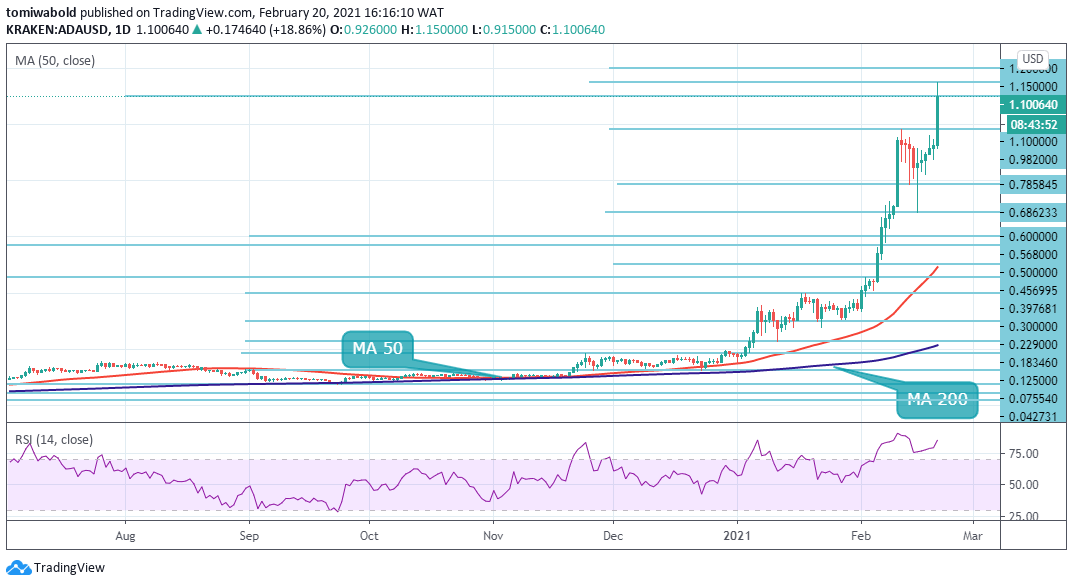 Cardano (ADA) is gradually approaching its 2018 all-time high of $1.33, nearly 14% within reach. If the bulls can push ADA price beyond $1.15, the ADA/USD pair could rally to new all-time highs past $1.33 and then $1.50. The rising moving averages and the RSI in the positive territory suggest that the bulls are still in command.

On the 4-hour chart, ADA sits on top of formidable support at the MA 50 ($0.90) which has been consistently defended by the bulls. ADA breakout to highs of $1.15 on Feb. 20 kickstarted from the MA 50 support. On the upside, a sustained break above $1.15 holds the key to an uptrend with target objectives of $1.33 and then $1.5. Because the rally occurred in a quick spurt, ADA left support and resistance levels untested.

How to buy Gold-Backed Cryptocurrency

Ethereum Rallies Past $2K As UniSwap Blasts Off, What On-Chain Metrics Depict for Bitcoin’s Rally Past $57,500

Ethereum Rallies Past $2K As UniSwap Blasts Off, What On-Chain Metrics Depict for Bitcoin’s Rally Past $57,500