Amid optimism that a U.S. giant pharma company had developed a 90% vaccine for COVID-19, global markets with related stocks recorded massive gains. The effect trickled into the crypto market as the flagship asset managed to touch $16,000 before quickly falling. After reaching highs of $0.1151 on November 7th, Cardano (ADA) settles for consolidation following a bullish impasse. The $0.11 key barrier has remained intact since the beginning of September. ADA/USD has attempted to break higher but the bearish rejection came strongly to constrict ADA in a short term range trading in the last few days. Cardano is changing hands at $0.1040, slightly down by 0.23%. The market cap is ranked 10th on the Coinmarketcap table and currently stands at $3.28 billion, with $554 million in trade volume over the past 24 hours. Ergo Platform, a strategic partner of Emurgo, recently announced the launch of newly-developed oracles custom-made for the ADA ecosystem. With the oracles’ launch, ADA could soon start to rival Ethereum within the DeFi sector. However, Cardano bulls seem to have ignored the news amid a consolidation stint.

*After reaching highs of $0.1151 on November 7th, Cardano (ADA) settles for consolidation following a bullish impasse
*Cardano is changing hands at $0.1040, slightly down by 0.23%
*Ergo Platform, a strategic partner of Emurgo, recently announced the launch of newly- developed oracles custom-made for the ADA ecosystem 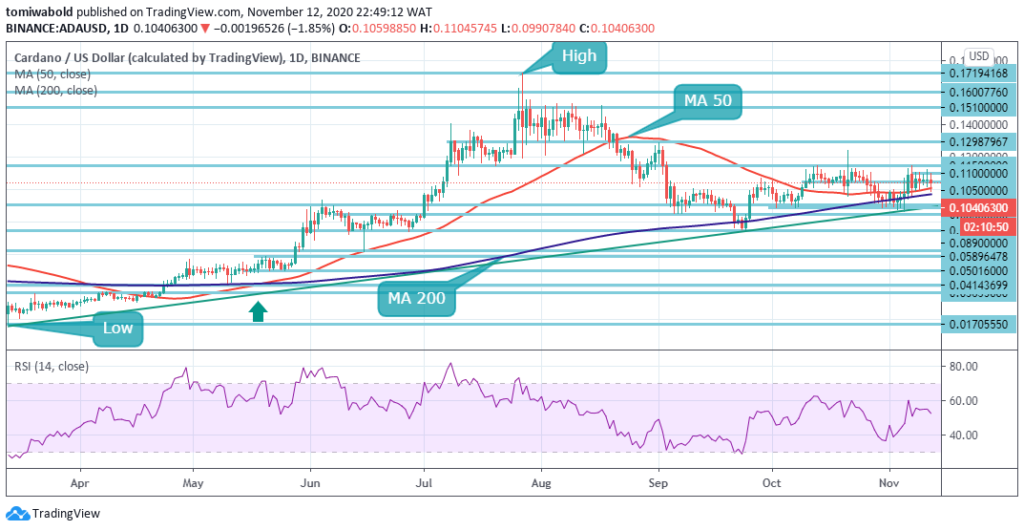 As seen on the daily chart, consolidation continues to dominate after hitting a substantial wall slightly above $0.11. ADA lost a significant chunk of its July 27 peak at $0.1719 before establishing primary support at $0.0789. Recovery from the anchor has been gradual with the upside capped under $0.11 key resistance. An ascending trendline also ensured that downside price action is mitigated.

On the flipside, ADA is presently trading above the MA 50 support coinciding with a $0.1011 mark. A breach beneath the MA 50 support may cause ADA to touch down on MA 200 situated at $0.0973. If that fails to hold, ADA may be forced to seek support at the next buyer congestion zone on the ascending trendline which may stop further losses.

As seen on the 4-hour chart, Cardano is range trading within the MA 50 and MA 200, suggesting it holding onto a generally up-trending market. Traders await the next major directional move as the MA 50 and MA 200 reach a confluence zone. A break beneath the $0.1035 mark could see the ADA/USD pair testing towards the $0.0910 region.