All Eyes May Be on Bitcoin (BTC), Here Is Why Investors Should Pay Attention to Ethereum and Yearn.finance

The first and largest cryptocurrency, Bitcoin (BTC) attained a new yearly high at $15,960 on November 5. However, BTC momentum paused after a price rejection, forcing bulls to take a short breather.

Since then, BTC bulls have been working around the clock to make sure the $15,000 support level is defended at all costs. While all eyes may be on Bitcoin (BTC) to see whether bears will push the price to $14K or if bulls will finally take the $16K mark, an historical trend and the possibility of capital moving from BTC to ETH and consequently DeFi may be few reasons why investors should pay attention to Altcoins such as Ethereum and Yearn.finance.

In October, when Bitcoin began its steep uptrend, Altcoins declined following profit taking which was cycled into Bitcoin. While Bitcoin’s price action may be an indicator that the bulls have returned into the market, it may also signify the nearing of a new ‘Altseason’. Bitcoin presently consolidates at $15,000. Ethereum is trading marginally up at $444 at the time of composing.

Here Is Why Investors Should Pay Attention to Ethereum and Yearn.finance

Denis Vinokourov of the Bequant crypto exchange opined that capital from Bitcoin could cycle into Ethereum and its ecosystem, especially decentralized finance. In the past 48 hours, the DeFi sector has performed remarkably since early September. This he said;

“All eyes may be on Bitcoin and the surge past the $15,000 level. However, the recent development update related to Ethereum may result in some capital rotating back into Ethereum and its broader ecosystem. This isn’t to say that Bitcoin will be actively sold, but the trend in locking Bitcoin on the Ethereum network may accelerate and be put to work across oversold DeFi and DEX tokens such as Uniswap.”

The launch of Ethereum 2.0 remains another bullish factor for the second-largest crypto asset. A trader with the moniker “Loma” highlighted that Ethereum 2.0 will pull out almost $1 billion from the market. While supply drops, the rally of Bitcoin is bringing significant capital to be cycled into ETH. 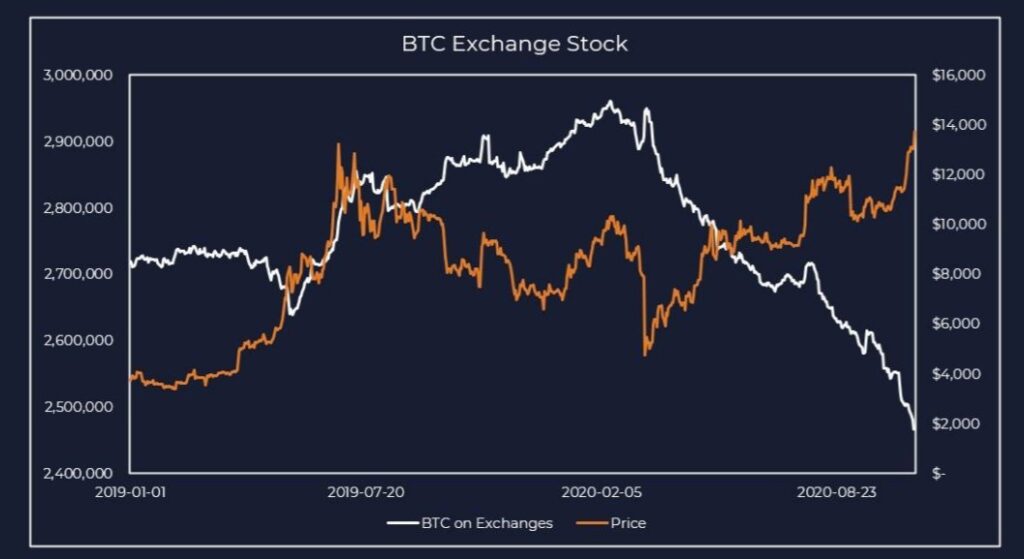 Also, an historical trend of BTC rallying first before Altcoins coincides with the narrative that ETH had a bull run in January 2018 to its all-time high of $1,419, almost a month after BTC reached its record-high at $20,000.

Before today, Yearn.finance (YFI) was one of the worst-performing cryptocurrencies since September. A couple of factors including massive short activity from whales caused YFI to plummet by 80% from its ATH.

The short activity was traced to some users depositing large amounts of Wrapped Bitcoin or Stablecoins as collateral into Aave, borrowing YFI, then sending those coins to centralized exchanges presumably to be sold.

To liquidate YFI shorts opened through Aave, a group called squeeze which included fund managers and popular traders in the crypto space was formed. Their main target was one short which was set to be liquidated once Yearn.finance began its rebound on Thursday evening.

While it isn’t clear what impact of the group activities on the YFI price, the squeeze took place on Friday evening in one of the quickest and most unexpected moves. From the lows to the highs of this action, YFI gained 140% within 36 hours. At the peak of this move, the token gained $3,000 in a short span of 90 seconds.

With Bitcoin (BTC) Risk-Reward Potential on the Table, Analysts Have This to Say in the Year 2021

With Bitcoin (BTC) Risk-Reward Potential on the Table, Analysts Have This to Say in the Year 2021