Altcoins Surge to Bitcoin Scam, Read This Venture Capitalist Crypto Market Prediction for the Rest of the Year 2020

The crypto market has relatively seen a bit of quietude in the last few months. In May, news of Bitcoin halving which was seen as a bullish event pervaded the crypto sphere but after this highly anticipated event, nothing seemed to happen as Bitcoin traded flat.

Alternative cryptocurrencies referred to as Altcoins rode on the back of positive sentiment against an underperforming Bitcoin as some crypto assets in this category went ahead to set fresh highs gaining dozens of percent in the process.

Most notable is Chainlink which rallied by 500% to set fresh all-time highs. Cardano (ADA) is also seen to have gained 600% from its March lows. Stellar (XLM), Tezos (XTZ), VeChain (VET), Cosmos (ATOM), and quite a few incurred massive uptrends setting fresh highs in the process.

On July 15th, the entire crypto market bit the news of the Twitter hacks pushing Bitcoin scam, awakening a relatively quiet crypto sphere. It was noted that after this coordinated attack, comments referring to cryptocurrencies on social media surged. 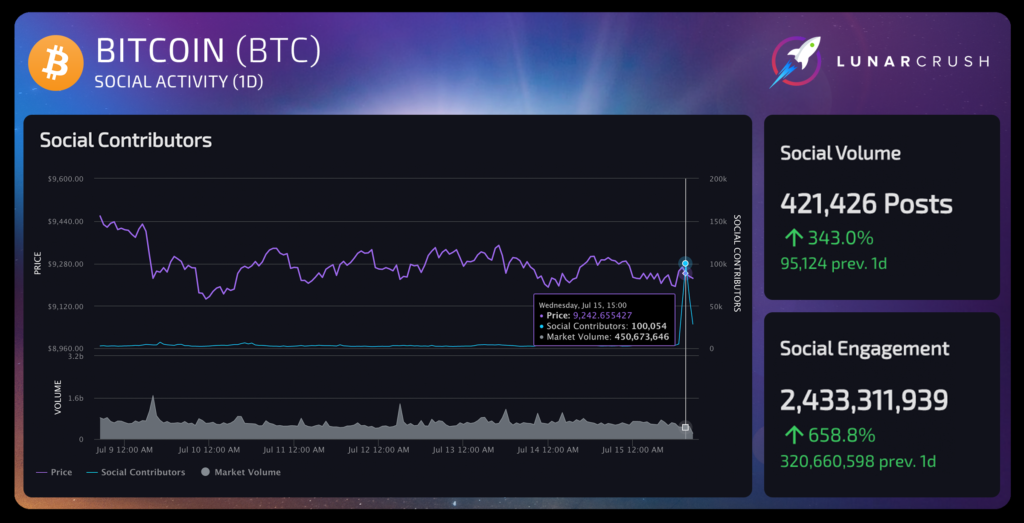 The estimated worth of $100,000 BTC (at press time) was reported to have been lost from the Twitter hack which spiraled to hundreds of millions of people, increasing Bitcoin popularity consequently.

On a positive note, the Grayscale Bitcoin Trust in a recent report indicated seeing strong inflows over the past few months largely from institutions. The data indicated an influx of investors fund totaling $1.4 billion, which is a weekly average of $43.8 million.

With all the happenings in the year 2020, Chris Burniske, venture capitalist and partner at Placeholder Capital recently hinted that there is a lot more to expect for the remaining part of the year.

In his words, he stated, “odds are it’s going to be a crazy fall (Q3/Q4) for the cryptocurrency and blockchain industry”.

When Chris Burniske stated that “odds are it’s going to be a crazy fall (Q3/Q4) for the cryptocurrency and blockchain industry,” he meant that volatility should be expected sooner.

This volatility will be seen in the price of Bitcoin and Altcoins earlier than presumed. An analyst stated that the historical volatility index has hit lows.

The venture capitalist, however, predicted these happenings for the rest of the year:

Bitcoin realigning itself to spur a post-halving bull run: After the 2016 halving, he noted that it took Bitcoin 6 months after the event before it embarked on a massive uptrend.

Probable launch of Ethereum 2.0’s initial phase “phase 0”: Although there has been a stir as to when the initial phase will be launched, most are postulating the likely date to be towards the end of 2020. Analysts preempt a strong impact on the crypto market as a result.

Facebook Libra initiative will be released with a new kind of structure, regulatory compliant, and appealing.

ZCash which has been in a multi-year bear market may embark on an uptrend as a result of an imminent block reward halving.

The value of DeFi collateralized loans exceeding the $5 billion mark: Since the beginning of 2020, the value of coins locked within DeFi struggled to hit the $1 million mark, clocking $700 million after the March market carnage. The recent DeFi explosion brought this value to $2.5 billion as we speak.

The venture capitalist mentioned that the upcoming United States election is one event to watch out for, though yet unclear on how this will affect the crypto market, considering President Trump’s anti-Bitcoin stance.

ETH Price Analysis: Strong Price Barrier Limits ETH/USD Advance Towards $240 Even As Demand for Ethereum (ETH) Surge Ahead of Bitcoin