‘Altseason’ Rave: Cosmos (ATOM) Sets Fresh Highs, Gaining 68% Within 10 Days, a Reason to Be on the Lookout

Cosmos is an interoperable blockchain platform that aims to create the “‘Internet of Blockchains”, a network of blockchains able to communicate with each other in a decentralized way.

The Cosmos network was launched with the release of its first blockchain, the Cosmos Hub, in 2019, comprises many independent blockchains that have one thing in common- byzantine fault-tolerant (BFT) consensus algorithm.

Cosmos (ATOM), the native cryptocurrency of the Cosmos network has a current supply of nearly 238 million ATOM with almost 191 million ATOM in circulation. There is however no cap on the total supply of ATOMs. 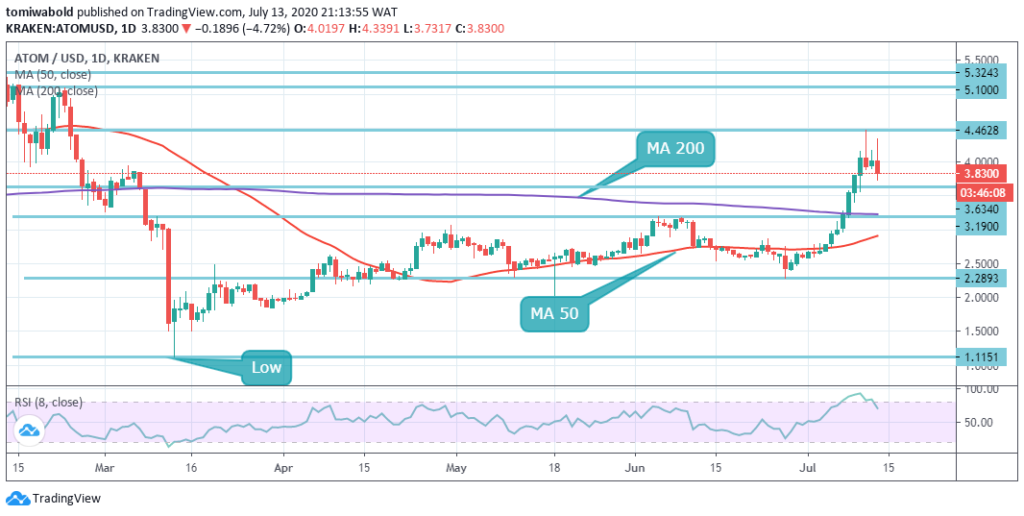 A Reason to Be on the Lookout

On the Cosmos Network, block rewards are issued to validators and delegators for Staking ATOMS, validating transactions, or for delegating transaction validation to other users.

Recently released data from Messari indicated Staking as a key reason for the massive uptrends of some assets.

Cosmos (ATOM) however seems to have leveraged on its recent on-chain development activity as the last ten days when it embarked on a massive uptrend coincided with the news wake of Cosmos partnership with Polkadot, and Terra to launch “Anchor,” a DeFi product that pays passive income.

The trio plan to launch it across their respective blockchains at the end of the third quarter 2020 and scale across to other PoS blockchains in the future.

Kava, a novel project launched on Cosmos focuses on interoperability with other blockchains. The Cosmos SDK is Binance Chain supportive which makes Binance Coin integration on Kava relatively simpler.

Cosmos (ATOM) shattered the key resistance of $3.19 on July 7. Buying pressure pushed the blockchain platform to as high as $4.46, signaling the beginning of a fresh uptrend.

However, a slight correction of one to three days may ensue after this massive rally due to an overbought RSI. Since Cosmos is still trading around its highs at a recent price of $3.83, any dip may be seen as a buying opportunity.

Key support levels to pay attention to are $3.63 and $3.19 which may prevent further downside pressure. If cosmos (ATOM) bounces off this support zone, the bulls will attempt to resume the uptrend.

However, key resistance remains at $5.10 and $5.32. This bullish scenario will be made null if strong selling pressure pushes the ATOM price below $3.19.