Amidst Bearish Pullbacks, BTC’s Correction May Lead to a New Rally

Bitcoin which saw its bullish trend sustained for weeks to reach its new 2020 high of $10,522 had a major pullback on Sunday which dragged its price down by hundreds of dollars to trade at a low beneath the $9,700 as at the time of writing. The market was thrown into a frenzy as within the space of a few hours, the top crypto asset flunks by 7%. Crypto analysts and investors alike seemed to have been struck with the fear that the Bullish trend might be over.

Notwithstanding the palpable tension felt all over in the market, two analysts have maintained optimism that the correction may be brief for the crypto asset to maintain its parabolic trend.

This year, BTC had experienced two slight pullbacks, the third time last Saturday which the analyst referred to as the “real” one in the game plan that may cause the Pioneer asset to rebound to $11,500 in the next few weeks, stated a trader who remained incognito as FilbFilb.

FilbFilb maintains that if BTC hit support between $9,500 to $ 9,700 price levels, the Crypto asset has a high chance of rebounding by 17% to hit $11,500 by the first week of March. FilbFilb who has earlier forecasted with an almost perfect accuracy last year about BTC’s price activity into the year 2020 believes BTC’s bullish trend is still sustained.

He relied on the BTC weekly candle to make his prediction of $11,500 as he stated that candle near above $9,500 could be seen as an inflection point for BTC parabolic trend, based on historical antecedents. 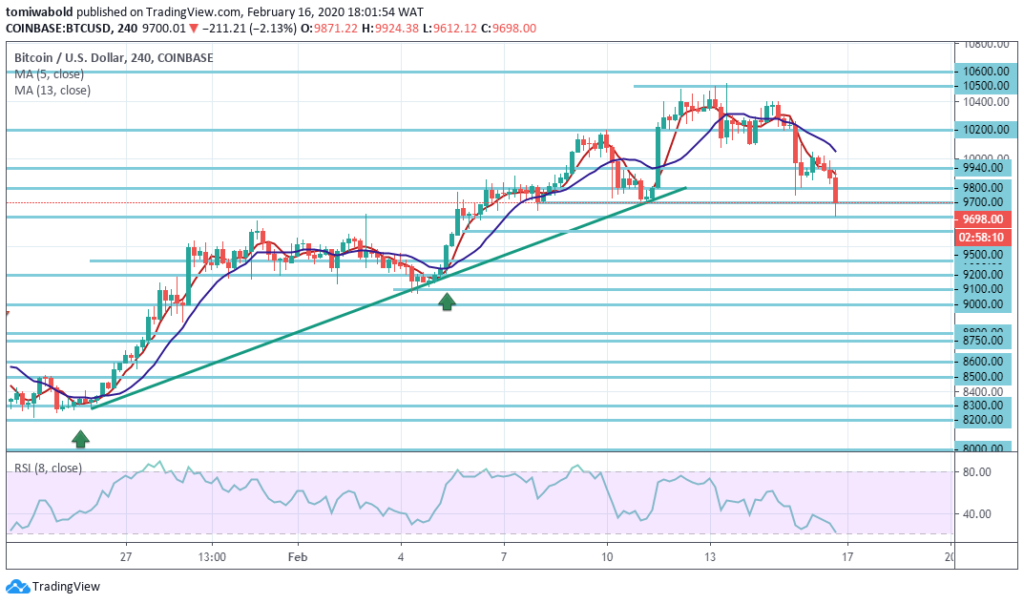 Another Impending Rally With BTC’s Recent Price Activity
Another top analyst also shared the same school of thought with FilbFilb that BTC may rebound to $11,000. He opinionated that if BTC stays past the key $9,800 support it may rally again.

Nonetheless, the indicator proposes a key bullish pattern line shaping with support close to $9,500 on the 4-hours time frame of the BTC/USD pair.

Besides, the key bullish pattern line, shaped with the support of about $ 9,500 on the 4-hour time frame of the BTC/USD pair, is presently exchanging over the Fibonacci retracement level of 23.6% of the ongoing correction from a high of $ 10,522 to a low of $ 9,600.

In this manner, an unmistakable break past the $10,200 levels could open the entryways for a bigger upward move in the coming sessions. Right now, the bulls may see a leap forward past $ 10,500 and a testing zone of $ 11,000.

In the bearish case referenced, the price is probably going to proceed with the adjustment down to the support region of $ 9,000.