Bearish sentiments took hold of Bitcoin as it wobbled without support on Thursday in the biggest crash it had ever recorded since the beginning of the year. Bitcoin succumbed to pressure which brought it down from its key levels of $7,700 to trade as low as $5,578 shedding off 40% in the 24-hour range. The carnage continued until the top crypto asset marked a new year low of $3,858, down by more 50% from its weekly high, the worst sell-off it had ever recorded since 2013.

Many analysts weighed in giving the reasons for the brutal crash. Some attributed it to the view of BTC by investors as a risk-on asset rather than a safe-haven. Raoul Pal opined the fall may be attributed to liquidated hedge funds in BTC longs. Ross Middleton of crypto exchange DeversiFi attributed this to weakness in traditional markets coercing institutional investors out of their positions on Bitcoin. Digital Galaxy CEO, Mike Novogratz, disagrees, saying that institutions can’t influence that kind of sell-off, he opined, it was created by leverage traders who indulged in panic selling.

However, the majority concur that the key factor influencing BTC price at the moment is the coronavirus pandemic and the stock market crash, coupled with the gold price.

Analysts believe there could be a squeeze up in its price further. 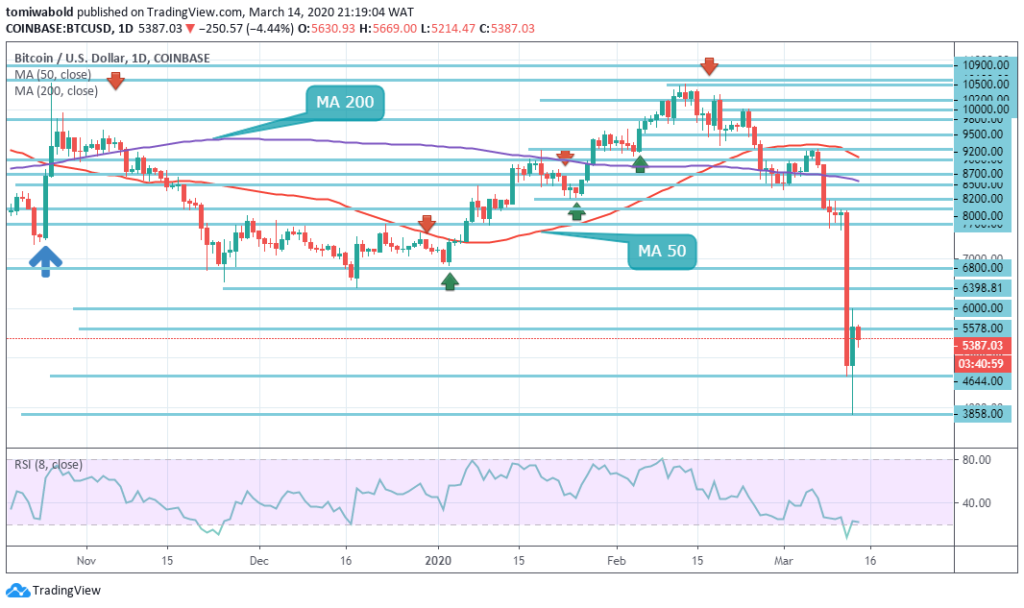 Analysts see bullish momentum building up for the top crypto asset in the near term. Pseudonymous trader, Filb Filb gave three reasons for his bullish stance:

First, the short-term chart has printed Adam and Eve-bottom, the Adam and Eve formation is typified by a sharp and deep first bottom on high volume (Adam). A rebound occurs and leads up to a gentler correction, printing a second bottom (Eve) on lower volatility.

Third, buying support is gradually building on the bid side of the order book.

Trader CJ who maintained his bullishness stated that the top asset has initiated trading above a “swing low pivot,” diagonal support that has bolstered the price since the crash bottom, showing on a 15-minute chart the 0.75 level of the range, while BTC price consolidates beneath resistance levels.

Co-founder of Morgan Creek, Anthony Pompliano admitted buying BTC at the recent dip, stating that the market condition may act as a propellant ‘Bitcoin Rocket Fuel’, in his words. Pompliano says he’s confident that recent developments on the macro stage are propellant for the major crypto.

Ross Middleton and Raoul Pal, both financial analysts believed Bitcoin’s crash was caused by the traditional markets, in which case if the traditional markets sustain its volatility, BTC bearish trend may continue as investors try and hedge their portfolio risk in these hard times, forcing them to give up their BTC positions.