Band Protocol (BAND) is a decentralized oracle that serves as a layer-2 protocol on public blockchains. It enables decentralized applications (dApps) to borrow existing data on the internet without intermediaries. Meanwhile, its multi-token model ensures that data remains uncorrupted.

In the last couple of weeks, BAND has been on a mind-blowing uptrend extending its bullish momentum at every count. The last three weeks saw Band Protocol setting a high of $5.2599, nevertheless, it failed to hold the local top for a longer period, leading to a downside correction towards $2.8251.

However, following a Coinbase listing hype, BAND surged from as low as $3.81 on Monday to as high as $8.99 on Friday in the week. In a spectacular move on Wednesday, Band Protocol (BAND) surged more than 43 percent within 5 Minutes as it jumped from the $5.40 to $8.05, surging ahead on Thursday. BAND also doubled its market valuation within these four days, making it one of the best-performing assets in the crypto space, with its year-to-date gains standing at more than 3,000% above zero at the time, outperforming Bitcoin, S&P 500 futures and precious metal, Gold.

However, when the market thought they had seen it all, today, Band Protocol had another explosive rally which brought it to highs of $12, gaining 52% in the last 24 hours.

Band Protocol’s keen competitor, Chainlink (LINK) has also been on an uptrend setting fresh highs of $13 in an explosive move today. At present, other cryptocurrencies offering oracle technology, which is Chainlink’s premise, have also surged higher.

Band Protocol however continues to gain more traction as a DeFi oracle. It launched its mainnet phase 0 and entered new partnerships with some of the leading DeFi projects. An instance of its recent partnership is with Elrond. 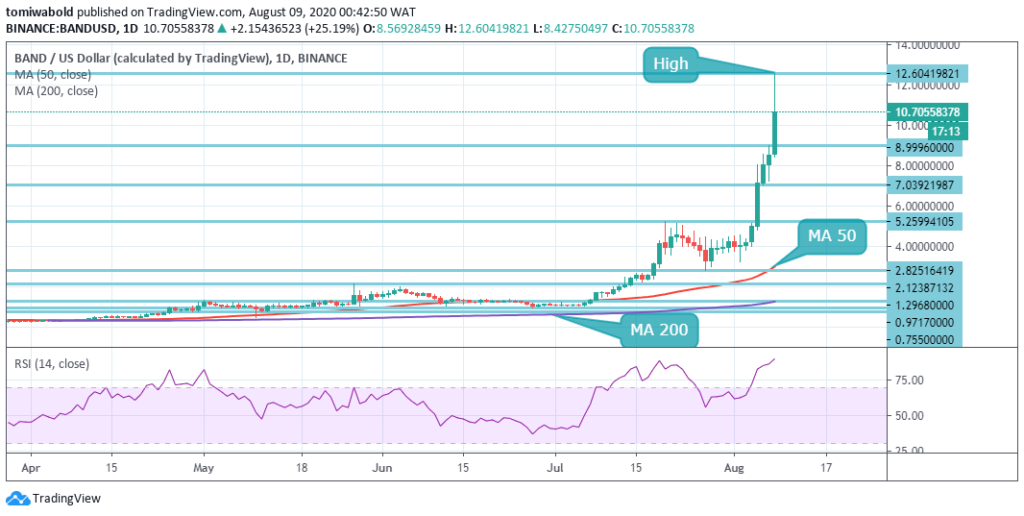 Looking at the network functionality, Chainlink’s network is operational at the moment, unlike Band Protocol which is still rolling out its mainnet. 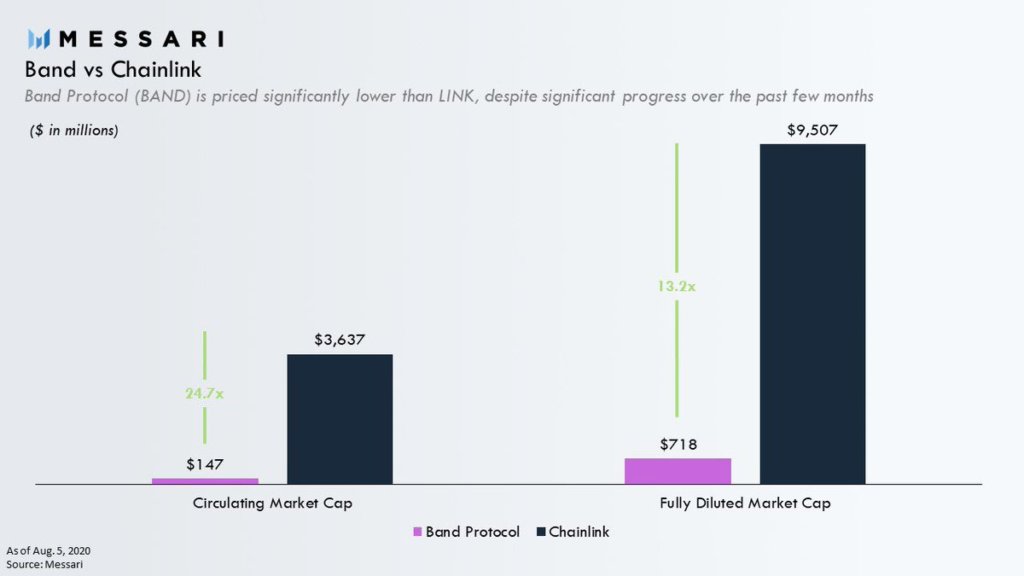 Ryan Watkins of Messari noted that another key factor steering BAND bullish momentum is that investors are using Chainlink as a Tether for the value of other oracle tokens.

Watkins isn’t however oblivious of the gap between LINK and BAND in terms of market capitalization and network functionality. He noted that this difference may imply that, BAND has further room. This he said:

“This key difference may explain the still large valuation gap between Chainlink and Band (in addition to Chainlink simply being overvalued). Or it could suggest there’s still room to go”.

The extent of Band’s growth may be yet uncertain but Chainlink being 25 times larger than Band in terms of market cap implies that Band has enormous growth potential.