Bitcoin Cash is a crypto-asset from a Bitcoin fork, developed around 2017. BCH is among the best-performing tokens on Monday amid a strong bullish rally all over the crypto-currency market as the upside growth gathers momentum. Bitcoin Cash is the 5th most popular cryptocurrency, with an average transaction volume of about $1.34 billion and market capitalization at $4.33 billion, as per data recently compiled from Coinmarketcap. Bitcoin Cash (BCH) has steadily risen in price since it added almost 70 percent from March 13th. BCH/USD eyes $250 confluence zone ahead of a larger breakout and has grown by more than 6 percent in 24hrs to trade at $241.55 intraday high. With an increasing number of innovative privacy features paired with BCH’s popular transaction speeds, Bitcoin Cash appears to have fallen out of favor with Dark Web users since it’s far from being a leading cryptocurrency there. BCH accounts for 10 percent of the overall volume of transactions on the darknet markets, reports Bitcoin.com.

*Bitcoin Cash (BCH) has steadily risen in price since it added almost 70 percent from March 13th
*BCH/USD eyes $250 confluence zone ahead of a larger breakout and has grown by more than 6 percent in 24hrs to trade at $241.55 intraday high
*BCH accounts for 10 percent of the overall volume of transactions on the darknet markets, reports Bitcoin.com 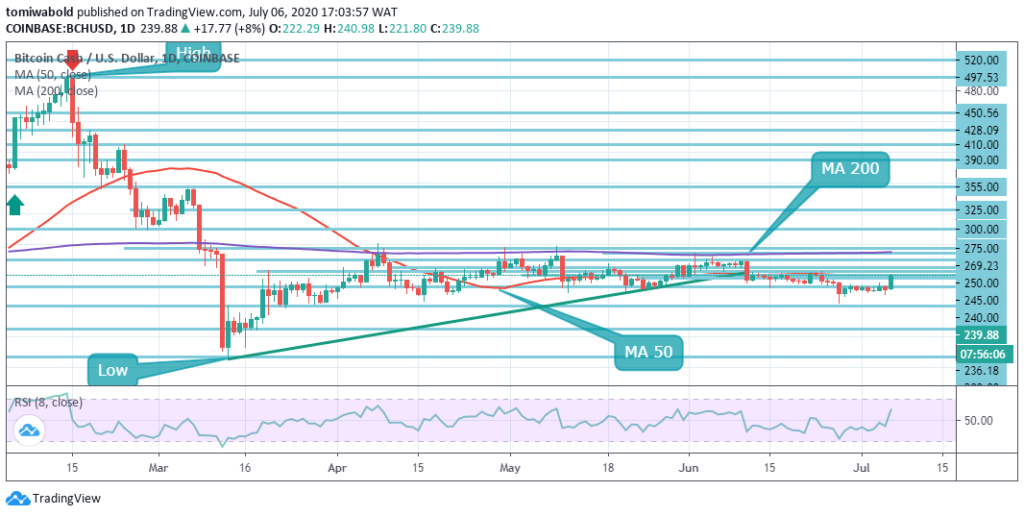 Bitcoin Cash attempts to breach the $240 resistance barrier, and as it did, most crypto traders and investors shift their focus to BCH breaching the $250 high resistance mark. With it holding steady roughly at $239.88, it now appears set to revisit the $245 resistance level since June 23.

A rebound beyond $245 may signal the upside towards $250 emerging as potential targets. That being said, in the case of Bitcoin Cash, an infusion of the volume is required to push the price further north. Once bulls run out of steam over the next few sessions then Bitcoin Cash may be back in bearish charge, with a slide beneath $225. 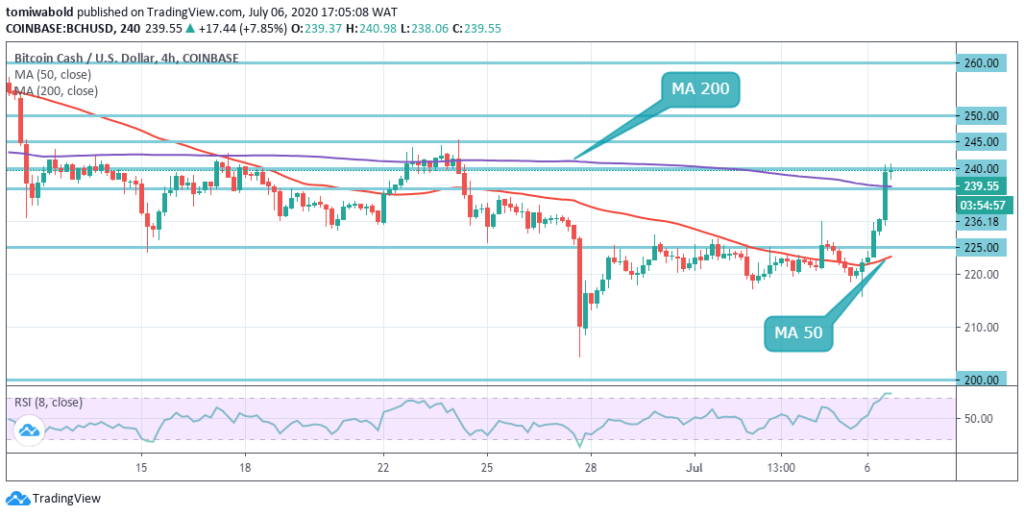 On the intraday chart, BCH/USD broke beyond a strong local level of resistance generated at $225 by the horizontal near-term resistance which may serve as support going forward.  The step generated a significant momentum and moved the price around the horizontal resistance of $240 slightly aligning with 4 hours MA 200. If the bullish rise gets traction, the price may breach the MA 200.

As a reaction, the bulls may once again attempt to breach the next $245 resistance while getting insights from price-positive RSI overbought conditions. More of the ensuing market sentiment may rely upon Bitcoin’s course. A fall beneath $225 may lower the price to $200 and a fresh downtrend is probable if that support breaks too. The first downside support is at $175 and the decline may continue to $165 once it gets broken.

Crypto Volume Is Much Bigger Than We Can Imagine

Crypto Volume Is Much Bigger Than We Can Imagine