BCH Price Analysis: Bulls Aim to Breach BCH/USD at $245 Barrier As Bitcoin Cash Tags Along With the Bitcoin Market Surge

Bitcoin Cash (BCH) registered an impressive gain over the weekend after volatility returned to the cryptocurrency market. Altcoins with smaller market capitalization especially BCH resumed the uptrend as Bitcoin (BTC) buying pressure spikes. A reversal on BCH/USD evolved from monthly lows of around $200 to re-attempt its upside journey. After a major price move, bulls aim to breach BCH/USD at the $245 barrier. The BCH market cap is currently 5th on the Coinmarketcap table at $4.49 billion, with $1.88 Billion in exchange-traded volume over the past 24 hours. The Bitcoin Cash (BCH) spot price remains up over 9.25% from the prior week’s low of $215. In the meantime, BCH/USD is doddering slightly above $242 amid a developing bullish momentum. Bitcoin Cash (BCH) tags along with the Bitcoin market surge as the latter noted a boost in its value too. The Bitcoin market has been surging over the past couple of days and given the strong correlation between Bitcoin and its hard fork, BCH has remained on a bullish rally.

*A reversal on BCH/USD evolved from monthly lows of around $200 to re-attempt its upside journey
*After a major price move, bulls aim to breach BCH/USD at the $245 barrier
*Bitcoin Cash (BCH) tags along with Bitcoin market surge as the latter noted a boost in its value too 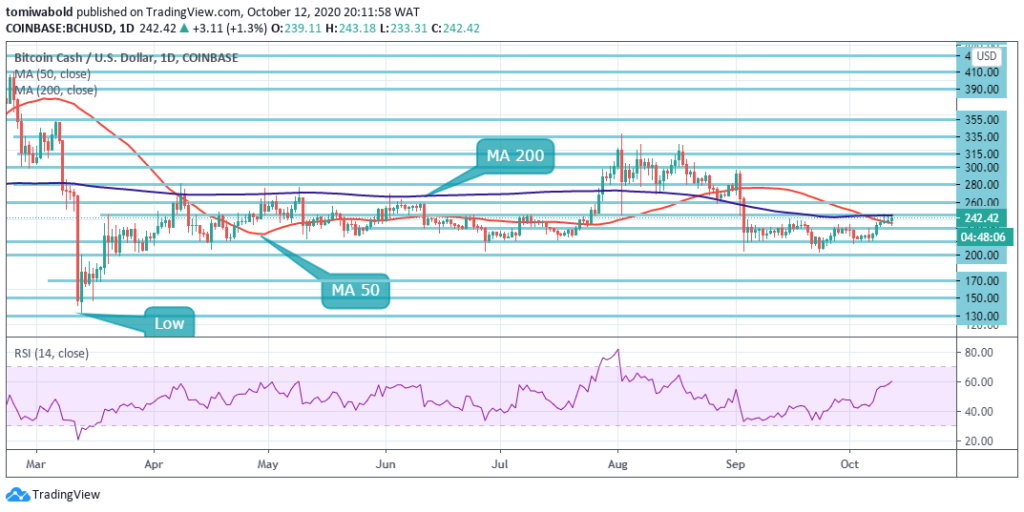 The technical pattern confirms the MA 200 resistance level at $245. If bulls gain the strength to push this hurdle into the rearview, Bitcoin Cash will quickly rally to $260. Nevertheless, this price hurdle was able to keep rising prices at bay to record an intraday high at $243.18. Unlike Bitcoin, BCH entered the week stuck beneath the close $245 barrier without breaking higher.

BCH/USD may lose upside traction if it fails to close beyond the $245 barrier, as prices traded within the prior day’s range, unable to trade above the previous day’s high. Bitcoin Cash is showing strength on the daily chart supported by its long-term uptrend with only the medium-term trend being bearish. Buying could speed up should BCH move above the nearby swing high at $245 where further buy stops might get triggered. 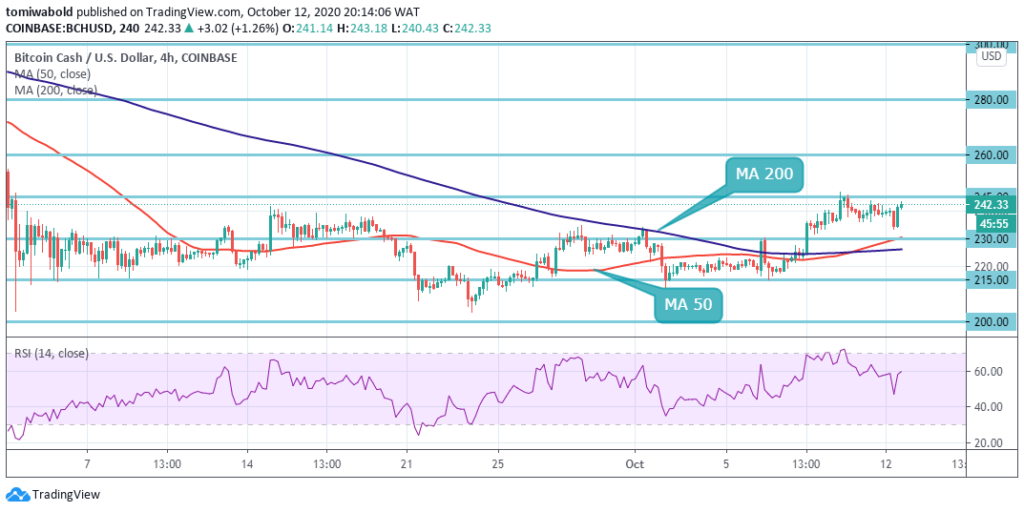 On the 4-hour time frame, Bitcoin Cash has turned technically bullish and MA 50 has broken above the MA 200, as traders start to buy into Altcoins with Bitcoin breaking to the upside. The BCH/USD pair may target the $260 resistance zone next if the $230 support area of 4 hours MA 50 holds on downside attempts. Traders are likely to buy into any meaningful technical pullbacks towards the $230 support area this week in anticipation of further BCH/USD gains.

Bitcoin Cash (BCH) has built an uptrend on the support established at $215. The price action extended marginally above $240 mark before the breakout stalled. The BCH/USD pair is only bullish while trading above the $245 level, key resistance is found at the $260 and the $280 levels. If the BCH/USD pair remains below the $245, sellers may test the $230 and $200 support levels.