Bears May Weaken Amidst ETH’s Next Price Move – Alex Krüger

In the Past Weeks, the Crypto Asset Had Been Buoyed by Bullish Sentiments of a Nearing Altseason

The second-largest cryptocurrency with a market cap of $28.8 billion, Ethereum was seemingly crunched by the flash crash that affected the crypto market, as days before, the crypto asset flunked by nearly 8% to slide from a high of $290 level to around sub $250 level. The pair ETH/USD erased the gains from the week’s start to hit a low of $245.25 on Thursday as other cryptocurrencies bleed.

In the past weeks, the crypto asset had been buoyed by bullish sentiments of a nearing Altseason.

Of late, analysts have used BTC’s price activity to predict what is next for Ethereum as it seemed that BTC’s previous rally had subsequently propped up other Altcoins like Ethereum while its recent drop caused by market volatility spurred the same downtrend scenario for the Altcoins.

ETH’s massive sell-off days before might have suggested that the bull trend might be over; however, on the other end, some analysts are seeing the potential of a further climb by the crypto asset. 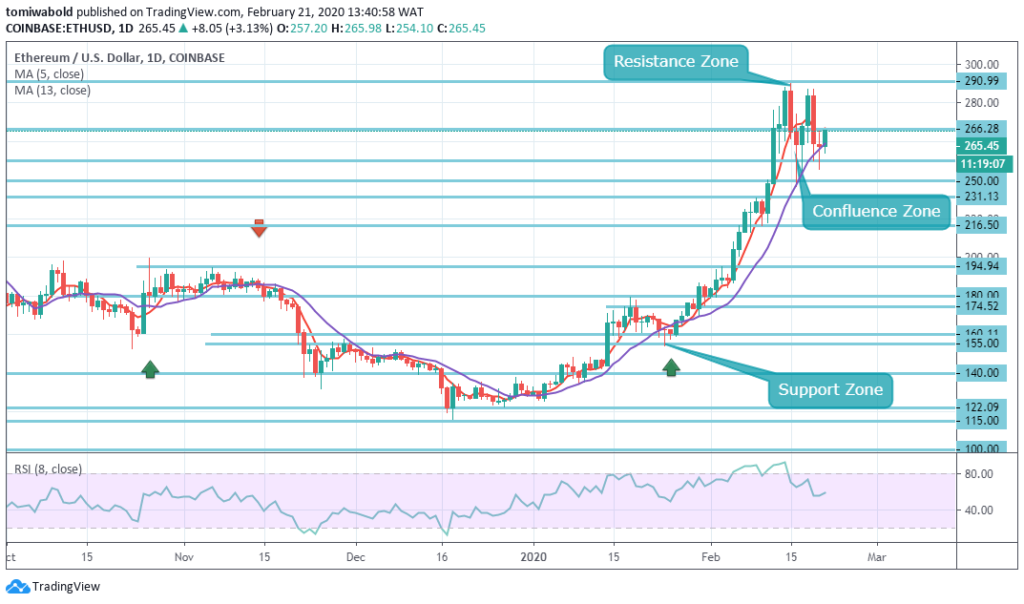 ETH had nosedived from its previous high of $290 to its current price range of $254/66 which it has gained support, $266 threshold is considered as a near term resistance which once flipped could spur the crypto asset further. In futile attempts, days before, it was strongly rejected above $266.

Analysts are on the lookout for Bitcoin‘s next price move as it is believed to forecast ETH’s price trends because both crypto assets have been on par in their price trends in the last couple of days.

Kruger, in a new tweet, believes the bears may weaken as ETH pushes past its resistance level leaving late ETH buyers ‘’sweating” as ETH bulls at the moment require extra caution, he noted.

The buy zone is indicated on the daily charts horizontal confluence levels, while the 5 and 13 moving averages point to the top at $290 price level.

For ETH’s bullish scenario to play out, Ethereum has to break the $290 resistance referred to earlier as a preferable buy top by the analyst.

Kruger referred to the double top formed on the daily chart by the crypto asset previously, noting that it might falter and may not be a bearish indicator as some analysts predicted.

He, however, posited the chances of ETH experiencing a slight pull back from its recent price to gain key supports, but there is a high possibility that its bullish trend may remain sustained into most parts of 2020.

TOKEN2049 is Back for 2020, Examining What’s Next for the Crypto Industry