Bitcoin Has Been on a Massive Run

The first and largest cryptocurrency, Bitcoin (BTC) has been on a bullish move in the past few days. After trading as low as $11,200 in the prior week, Bitcoin kept surging higher in a way that has left many astonished.

Bitcoin bulls went on a rampage when Square joined the ranks of large companies stacking Bitcoins. The moment the purchase of $50 million worth of BTC as a part of the firm’s long-term vision was made, Bitcoin kicked off a strong rally. Paypal’s recent bid to allow its user to accept, hold or transact cryptocurrencies also added to BTC bullish impulse.

Bitcoin exploded like a timebomb gaining more than $1,000 in a single green candle. BTC is climbing higher at $12,903 at the time of this writing after registering a fresh high at $13,250.

An analyst had earlier predicted that once Bitcoin got going, it would be like a bulldozer. Bitcoin has been on a massive run since the prior week, revving its engines on Square Inc. 4000 BTC purchase.

Analysts are presently seeing that BTC has room to climb higher since Bitcoin’s funding rates remain negative to slightly positive. This was stated:

“The other times that BTC tried to break $12k, funding and premium were positive. They are neutral/negative now. So yeah, this time is different.”

Fundamental trends are also bullish as the U.S. continues to push towards another fiscal stimulus bill. Analysts say that closure on this bill will push Bitcoin higher as it will mark a further injection of capital into the economy.

On-chain metrics confirm Bitcoin’s near-term bullish bias. Intotheblock’s data on In and Out Market Positioning shows that there is a strong cluster of nearly 2 million addresses with over 1.4 million coins bought on approach to $10,400. Meanwhile, there is little in terms of resistance above the current price indicating the upside is the path of least resistance.

Recent Data Shows Something Quite Interesting

Although Bitcoin derivatives support Bitcoin bulls, recent data however shows that top traders added to their short positions the moment BTC climbed above $12,000. There is a recent switch in trader positions when compared to that seen on October 12. On Oct. 12, these traders increased their longs, but during the recent climb above $12,000 these pro traders are opening up short positions. 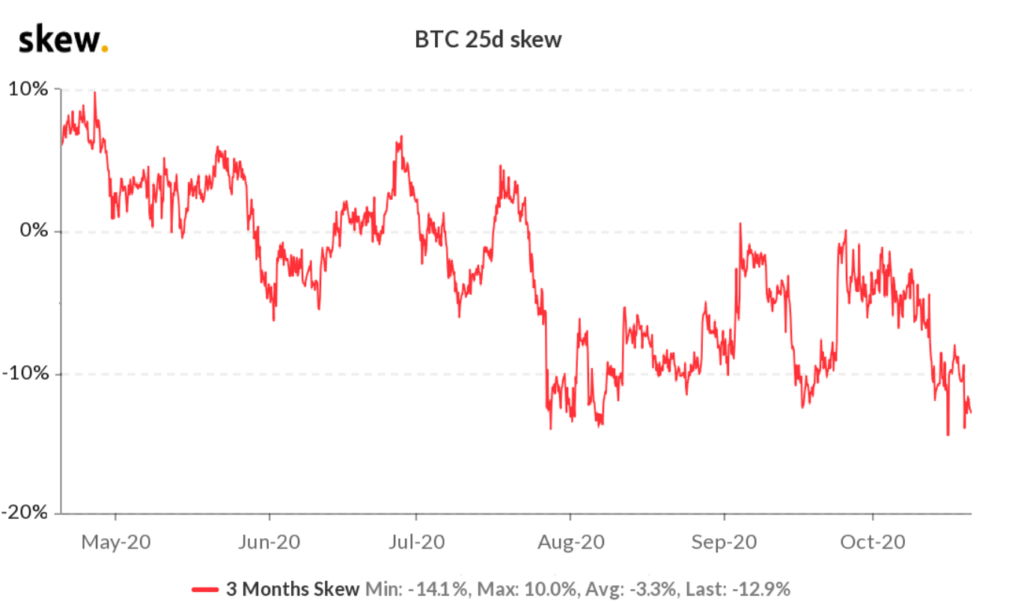 BTC derivatives are overly bullish with the futures’ basis and the options 25% delta skew reaching the same levels seen on October 12. The skew indicator remaining at the current level for extended periods is unlikely in BTC history. However, trader positions are presently different which seems to indicate the absence of near-term optimism. The skew indicator has maintained its October 12 stance staying at its lowest levels in 6 months signaling traders’ optimism.

These seemingly conflicting signals could reflect the recent 15% jump in the last couple of weeks, spurring massive gains for some traders. Even though derivatives markets are overly bullish, pro traders seem to see no obvious reason to add to long positions at the present levels.