Bitcoin Breached Above the Resistance Mounted at $13,250 to Set Fresh Yearly Highs of $13,767 Today

The first and largest crypto asset by market capitalization, Bitcoin (BTC) in a bullish move that kickstarted in the prior week smashed the $12,000 key level to hit highs of $13,250. Bitcoin revved up its engine after Paypal announced its support for cryptocurrencies. BTC bullish momentum was however paused as it confronted a resistance at $13,250.

After a brief consolidation stint, Bitcoin breached above the resistance mounted at $13,250 to set fresh yearly highs of $13,767 today. Bitcoin bulls seem to have been energized by the recent news that a Bank was entering the crypto space.

Although yet to be confirmed, news has it that Singapore Bank DBS had decided to build a cryptocurrency exchange and offer crypto custody services with full regulation from the Monetary Authority of Singapore (MAS).

This Is What Every BTC User Must Know

1) Bitcoin Bulls Seem Unstoppable
From a technical angle, Bitcoin sustaining its move above $13,250 would mark the close of the BTC consolidation phase and the beginning of a new bullish wave. If Bitcoin flips this previous resistance into support, there may be little or no impediment on BTC’s path to $15,000.

This is substantiated by on-chain metrics as The In/Out of the Money Around Price (IOMAP) model reveals that there are no significant barriers above the present price, while the downside is clustered with substantial obstacles. 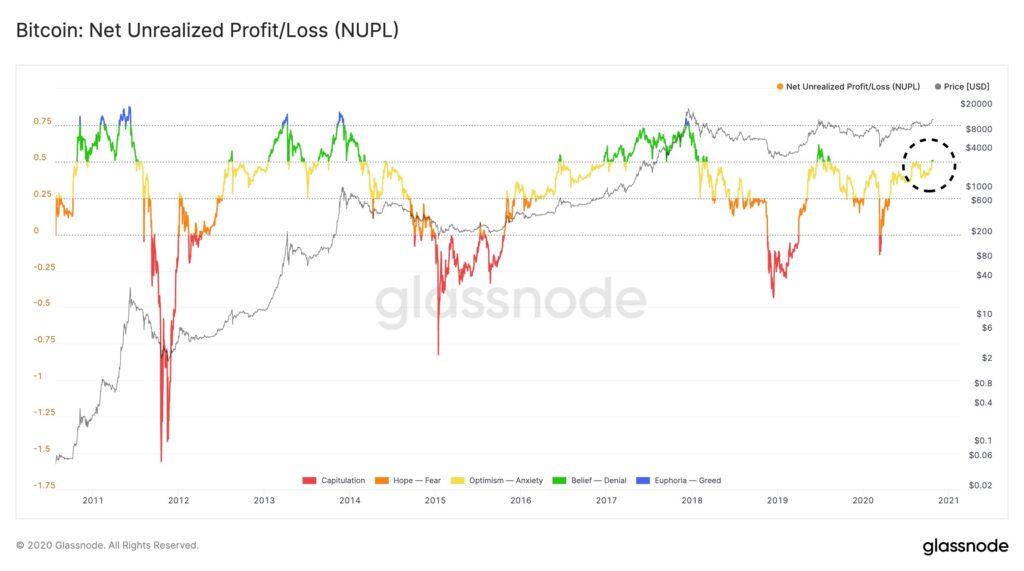 The NUPL of Bitcoin on top of its historical daily chart. Courtesy: Glassnode

Glassnode’s Net Unrealized Profit/Loss (NUPL) which measures how many Bitcoin holders are in profit or at a loss entered the ‘belief zone’ today. This has been historically linked to the start of massive rallies. Bitcoin jumped by almost 80% the subsequent month when the indicator flashed in June 2019.

“BTC 200-day average (green) trending above all-time average (orange) around the time of halving has never failed to induce a supply void driven rally. This is fundamentally programmed into Bitcoin and as long as demand is present, won’t break Last I checked, demand is present.”

The steady climb in Bitcoin price seems to suggest new demand is flowing into the market despite indications of Miner sell-off.

5) $14K Maybe Beckoning and Ultimately New All-Time Highs
A Bitcoin bull, Raoul Pal of Real Vision believes the upward drive has come to stay and more upside gains are likely to be seen more than ever before. This he stated:

“There are only two resistances left on the #bitcoin chart – 14,000 and then the old all-time high at 20,000, I fully expect new all-time highs by early next year at the latest ”.