On this day, 17th December, exactly three years ago, Bitcoin (BTC) recorded its first major all-time high of $20,000, pushing up to 2,000% gains for that year. During the year 2020, Bitcoin saw another uptrend that drove its price to new historic highs while crossing $23,500 on Dec.17 for the first time. Looking at the timing of the bull runs in 2017 and 2020, one may think that December is a historic month for Bitcoin.

When BTC rallied above $20,000, Glassnode stated in a tweet while backing it up with data that the number of Bitcoin addresses holding at least $1 million rose by 150% to a figure of 66,540. Stating:

The increase in millionaire wallets is alluded to early Miners hodling their Bitcoin over the years. However, not every investor has made out like a bandit, some missed out on this parabolic rally. In August, Barstool Sports founder Dave Portnoy reported selling his Bitcoin holdings and potentially missed out on doubling his $200,000 BTC investment. Portnoy had bought his holdings when the BTC price was below $12,000. 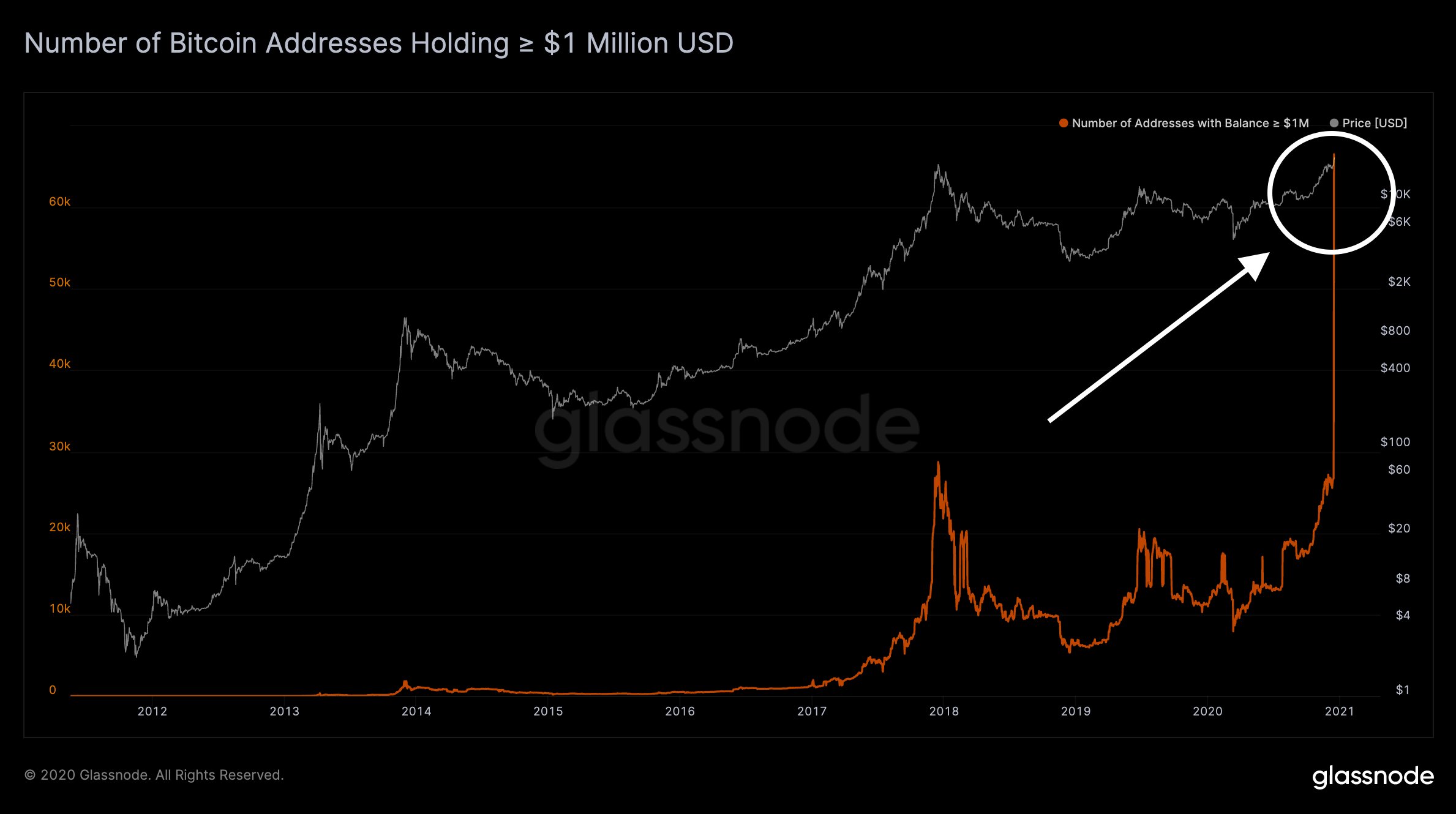 In his words “All those people who could have jumped in below $10k but decided to pass by targeting crazy low prices are now hoping for a massive pullback to get a second chance.”

Will the Market Present a Second Chance to Buy BTC Below $20K Again?

Bitcoin entered price discovery the moment it surpassed $20k. Beyond the $20k level, there is no historical context to predict Bitcoin’s price. Technically, breaking the $21,000 level was significant for Bitcoin to continue its rally in the near term. Exchange heatmaps indicated stacked sell orders at around $21,000 to $21,500, which meant this region was a roadblock.

A recent report noted that the manner institutions are ‘gulping’ Bitcoin this December is rapidly becoming noteworthy. With Bitcoin entering price discovery, the “original” whales are beginning to look like plankton as institutions line up to buy en masse.

Guggenheim Partners who entered into the Bitcoin market when the price was at $10,000 said through its chief investment officer, Scott Minerd, that their fundamental work shows that Bitcoin should be valued at about $400,000. Apart from Guggenheim giving a $400,000 price evaluation, hedge fund One River Asset Management recently confirmed that it planned to bring its Bitcoin (BTC) and Ethereum (ETH) holdings to more than $1 billion by 2021.

CEO Eric Peters was quoted thus “The flows have only just begun” implying there is yet no end in sight for the buy-ins. Danny Scott, CEO of Coin Corner stated ‘liquidity crisis incoming’ summarizing the BTC supply-side crisis caused by BTC shortage on exchanges and institutions OTC buying to which price spikes are the only logical solution.

“Settle in, because we will be visiting the $20-$22K level at least half a dozen times before we break through to the $30K range later in 2021,”  he said. “I do think we will also re-test the $14-16K levels either over a weekend with low volume or with bad news hitting the street. That will probably be the last time most of us will have a chance to buy Bitcoin below $20K levels ever again.”

LINK Price Analysis: Recovery on LINK/USD Slows Down at $14 Despite Chainlink Network Growth

LINK Price Analysis: Recovery on LINK/USD Slows Down at $14 Despite Chainlink Network Growth