The first and largest cryptocurrency by market cap, Bitcoin (BTC) begun the week on the wrong footing. On Sunday, in a broad-based selloff, BTC price was rejected from highs of $11,081 to touch lows of $10,180 on Monday.

Triggered by a strengthening U.S. Dollar Currency Index (DXY), the cryptomarket in tandem with the commodity and equity markets declined. This decline continued till BTC met stiff support at $10,135. Consequently, BTC set an intraday high of $10,795 on Thursday before beating a retreat. 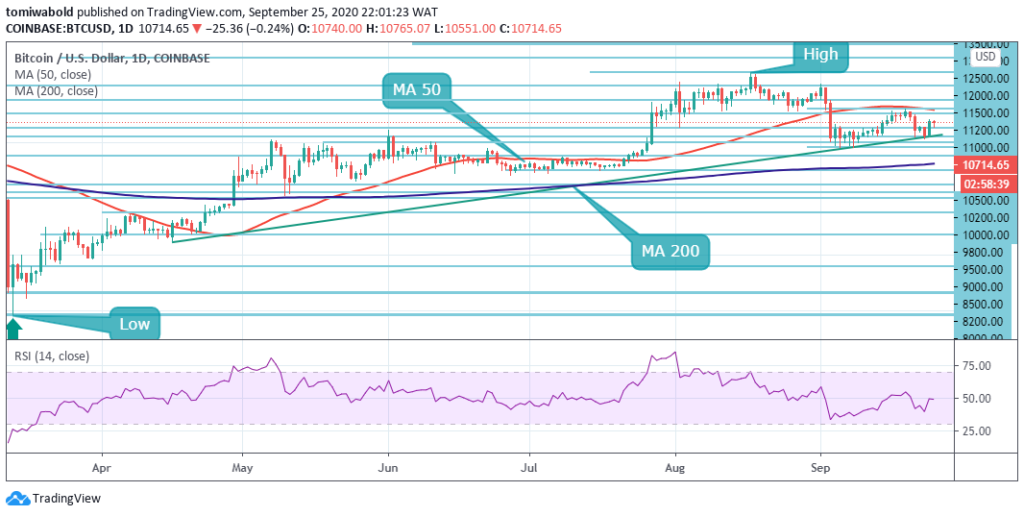 At present, Bitcoin (BTC) is trading marginally down at $10,714. The month of September has been a turbulent one for Bitcoin most especially on September 3rd, in a market crash, BTC conceded to the bears as it plunged from the highs of $12,086 to lows of sub $10,000. Since then it has traded within this range, shedding off 10% within the last 3 weeks to erase all of August gains.

Bitcoin historical charts reveal that in 7 instances out of 11 from 2010 in the exclusion of September 2020 which is yet to be concluded, Bitcoin lost traction in September.

In a recent data compilation by Arcane research, BTC plunged by 9%, 6%, and 14% in September from 2017 to 2019. Although it’s hard to conclude this statistically as data from 2010 and 2016 may be less relevant due to less Bitcoin’s popularity and smaller trading volumes but history seems to be rhyming.

The 2018 selloff was noted to begin in October after BTC traded sideways in September. In September 2017, BTC was engulfed in a bear trend which broke a long streak of green bars, while in 2019, it was part of a long-term decline from the peak reached in June.

This year 2020, recent reports indicated that September has been the highest month of funds moved to exchanges since March. Exchange inflow directly represents an increase in selling pressure across the market.

Meanwhile, September 2020 selloff was intensified by post-pandemic effects. IntoTheBlock’s IOMAP model exposes that the Bitcoin path to $12,000 will be challenging.

The total crypto market capitalization plunged in tandem from a high of $393 billion on September 1 to $327 billion before rebounding slightly to $337 billion on Thursday.

Zcash (ZEC), on the contrary, traded at $331 back then. Its recent price of $55 is a far cry from this. Though it may be hard to say whether these cryptos will ever reach these peaks again, it may be gainsaying that history has been fair to provide buying dips wrapped in second and third chances all through the years.

LINK Price Analysis: Buying Extends on LINK/USD to Rebound Past $10 As Chainlink Unfolds Amongst Top 10 Crypto Players in Q3 2020