Bitcoin, first cryptocurrency by market cap had kicked off the previous week with a thud, plunging from $9,700 at the week’s start to a low of $8,100, in a massive sell-off that saw over $200 million worth of BitMEX longs liquidated while other exchanges saw hundreds of millions of contracts liquidated.

Notwithstanding its downswing which happened days before its block reward halving, Bitcoin bulls, however, gained the upper hand pushing the cryptocurrency as high as $10,000 days after the 2020 halving event.

Bitcoin’s block reward halving which is seen as a catalyst for huge upside potential occurred earlier on in the week at the count of 630,000th block.

Halving which happens every four years saw BTC reward halved from 12.5 to 6.25 BTC.

Bitcoin had faced strong resistance at $10,000 considering the number of times it was rejected at this level and had reclined to trade at the mid $9,000 level, at the time of writing the top asset is trading at $9,371. 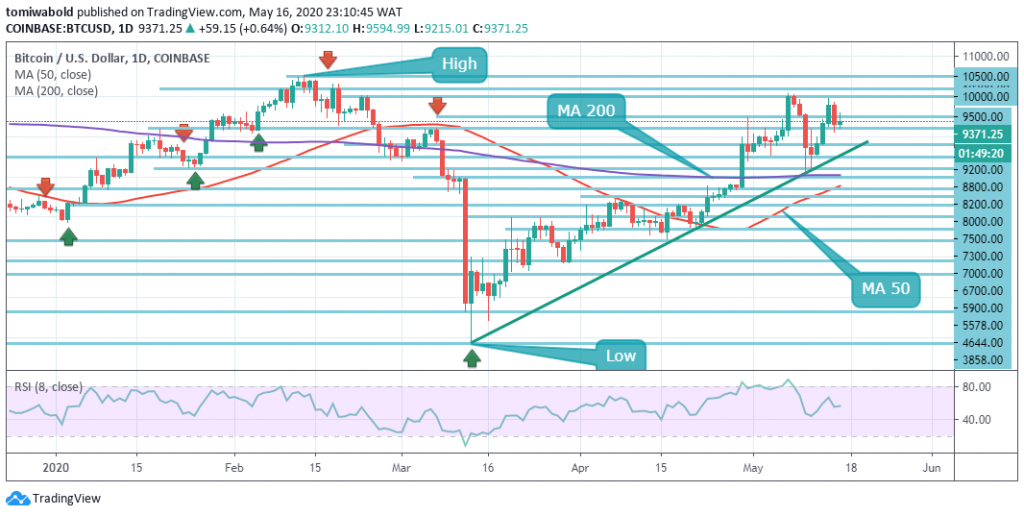 Weeks earlier, Bitcoin bulls had tried to break the $10,000 key level but were met with stiff resistance as they ran out of steam to trade around the $9,000 level. Bitcoin is however seen to be caught in a consolidation stint as it has failed to post any decisive trend in both ways.

Analysts have opined that determining Bitcoin’s mid-term trend will be a herculean task until it breaches the $10,000 key resistance level or falls below its support of $8,200.

In the meantime as Bitcoin continued its dilly dally, traders are keenly anticipating more volatility, open interest on BitMEX has recovered from its lows. Skew indicated that close to $30 million contracts in positions were liquidated when Bitcoin faced its rejection at $10,000 declining further to $9,000 levels.

Bitcoin Open interest connotes the value of outstanding futures contracts yet to be settled. It has been inferred that growth in open interest indicates that influx of funds into the market and that traders are anticipating a short-term volatility increase.

In the few weeks that preceded the March 12 market carnage, Open interest had plunged sharply from $316 million to $107 million as investors viewed Bitcoin as a risk-on asset.

Most allude Bitcoin’s underlying volatility could be attributed to the existence of numerous high-leveraged positions in the crypto market, which results in a dramatic price increase of the asset. The open interest gives a clue towards the presence of a highly leveraged position. 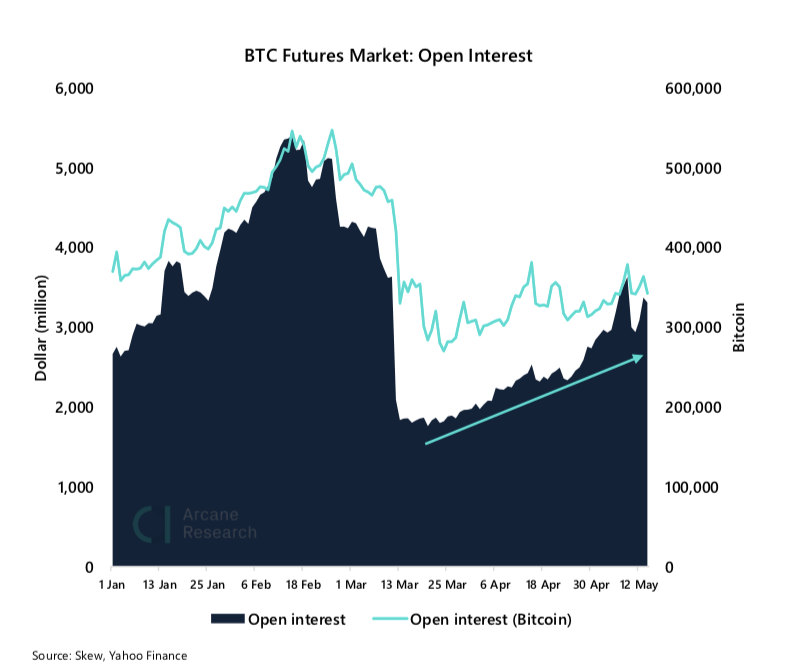 An Arcane Research analysis that indicated an increase in Bitcoin futures open interest had prompted analysts to believe that traders are not counting so much on leverage to benefit from Bitcoin’s volatility. It seemed to suggest that the high leverage positions had been wiped out leaving just a few. Analysts have seen this as a positive indicator signaling lesser chances of the market having such carnage as witnessed in March.

However Open interest recorded on BitMEX and other margin trading platforms in comparison with that seen on the futures market have differed greatly. Skew recently indicated CME Bitcoin options Open interest rose by 10 times its previous value this month.

CME Bitcoin futures are generally viewed to correlate with institutional and macro traders’ activity. The CME which is the first exchange to launch Bitcoin futures in December 2017 is the world’s largest futures exchange, rendering institutions access to derivatives on equities, commodities, foreign exchange pairs, and bonds.

Analysts have taken the differential between the Open interest as an indicator that traders are keen on gaining exposure to BTC long-term price activity rather than trying to profit from short-term price trends.

Analysts Hoist “Red Flags” on Altcoins, Could This Be the Gamechanger?