As the price of Bitcoins increase by leaps and bounds, there is also arising a growing risk in regards to what shall happen if the same comes crashing down! A Deutsche Bank economist feels that the crypto market crash is going to be one of the biggest risks lingering in 2018. The Chief International Economist of Deutsche Bank, Torsten Slok has recently shared a list of top 30 market risks which can handicap market growth in the year to come. 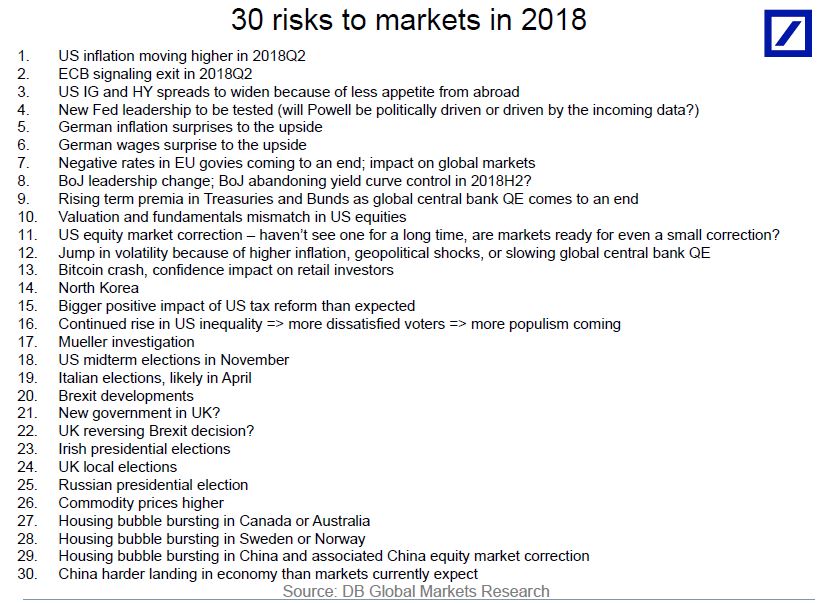 Bitcoin off late has undergone tremendous price hike which partly has also been triggered by the hype surrounding the same. Many have denoted this phenomenon to be a price bubble. However, the concerns of Deutsche bank seem to be slightly overblown. The comprehensive market capitalisation of all cryptocurrencies including the likes of bitcoin, ethereum, litecoin etc. is presently swinging around $400 billion mark. The financial crisis of 2008 was triggered by the U.S. housing market which had an estimated value of $29.6 trillion during 2016 which is 70 times greater than the market cap of crypto periphery. This does not denote that a broader meltdown couldn’t result from the bitcoin bust but considering it to be a systemic risk doesn’t seem like the most viable option.

With bitcoin owners located at every corner of the globe, the impact of a market crash will surely be a thoroughbred one. The list developed by Slok has ranked the bitcoin crash in a higher tier compared to the investigation of Donald Trump by Robert Mueller, which can lead to indictment or impeachment of a sitting U.S. President, and missile-testing by North Korea, which can ignite a full-blown war. Price doesn’t seem to be the only factor affecting the bitcoin bubble, outsized assessments having broader economic significance also has an important role to play.

India Is Looking To Use Blockchain Technology For Elections

Bitcoin Price Analysis – BTC Retreat Below $10,000 But is Recovery Imminent?

Best cryptocurrency exchanges to trade with the smallest fees in 2020

Bitcoin surged above 10,000 for the first time since September of 2019