How is Bitcoin Different From Oil and Gold?

Bitcoin that has been popular and that has been often termed as Digital Gold, has always been considered an asset equivalent to Oil and gold. However, it is important to know that there are crucial differences between the three assets, especially when it comes to tracking what happens to supply after an increase in price.

Twitter user @WallSt_Dropout produced a series of charts to draw out comparisons, with very fine illustrations.

First, Oil. As the price of oil goes up, there’s a marked response in oil production. Because now there’s extra incentive to invest in infrastructure/extraction capabilities. 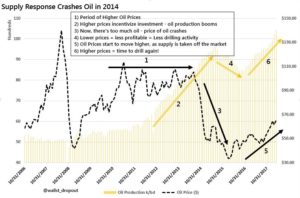 As oil production begins to overtake the required demand, there occurs a drop in the price of oil. Therefore it doesn’t remain profitable to remove quite as much oil as before, so production eases off. Later, as oil prices start to recover – thanks to restrictions in supply from the last cycle – the drillers turn their machines back on and produce more of the black stuff.

The same theory applies to gold. Since 2008 beginning, monthly gold ore production is low, owing to the consistently low prices in the previous decade. As market forces begin to push the price of gold up, production preps well to keep track of prices. As gold prices take a dip in 2012, ore production levels off. 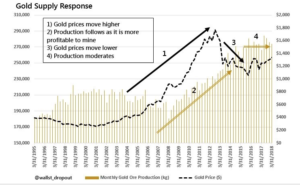 However, in bitcoin’s case, the opposite is true. In 2010, when the block reward for production was higher, prices were low. As prices have gone up over the time, the rewards for mining have dropped off. There isn’t the same cyclical relationship between supply and demand found in oil and gold.

This is a key function of how bitcoin works. The bitcoin block mining reward halves every 210,000 blocks. At present the coin reward is 12.5 coins. and if certain reports are believed to be true, by May 2020, the reward will drop to 6.25 coins.

The question that remains as of now is that how will miners make money after the block rewards end in 2140?

Transaction fees. Gold miners don’t control the buying and selling of the product, whereas bitcoin miners charge transaction fees for the confirmation work they complete. It would be the equivalent of an oil platform charging individuals a small fee for the oil they use in their cars. It’s a vital part of the system.

As soon as Bitcoin inflation rate starts going down steadily, the need for transaction fees to support miners to carry on with the mining will go up.

Oil and gold are commodities actually have no ‘real’ end date, i.e. there are still resources lying beneath the ground. Despite fears of peak oil and peak gold, companies keep finding more of such resources as now technological advances allow them to pinpoint their location and extract it with greater accuracy.

However, Bitcoin’s case is different. We know the bitcoin supply is limited and the it will end very soon. No technology is going to aid us in retrieving more bitcoins out of nowhere. Which makes bitcoin mining an entirely different concept than mining the real world commodities.