Since the start of October, the cryptocurrency market has been subjected to quite some events which could dampen investor sentiment. Late September, KuCoin exchange lost $281 million due to hacks. Barely two days into October, BitMEX charges by CFTC and President Trump’s coronavirus infection sent shockwaves into the markets.

After all these, investors expect increased volatility as some traders insinuated that a short squeeze could be in the offing. Amid all these, Bitcoin options open interest have remained at their highs. Bitcoin dominance also rose alongside.

On September 24, Open interest for Bitcoin options (OI) hit their all-time high of $2.14 billion. This was a day before a huge quarterly expiry of 89,100 contracts which represented 47 percent of existing options contracts at the said time. 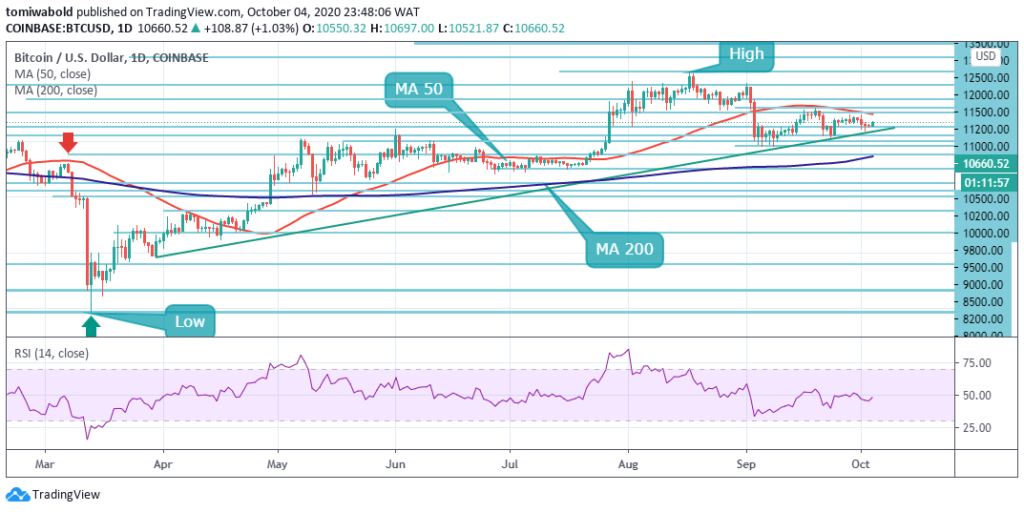 It has been noted that most times Open interest often spiked before the date of expiration in the case of every monthly and quarterly expiry. Bitcoin (BTC) is presently trading at $10,660.

The Nitty-Gritty and Why This Is Quite Important

Options refer to derivative contracts that give the holder the right (though not an obligation) to purchase or sell an underlying asset at a predetermined price.

“Strike price” refers to the predetermined price at which the asset is bought or sold. This is different from the spot price which is the actual market price. 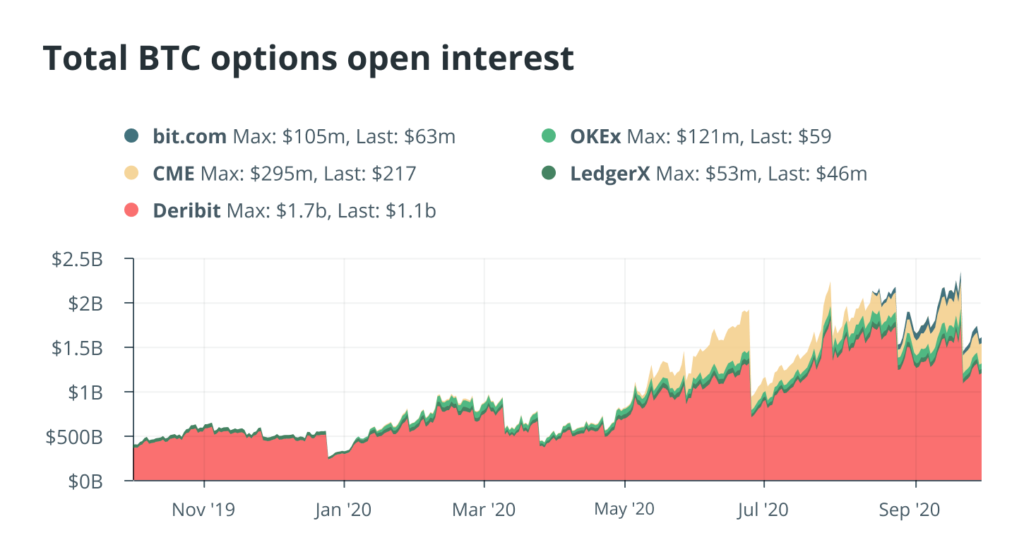 The reason why the spike in OI is important is that Open interest is normally correlated with expected uncertainty and events that are expected to have a fundamental impact on the price of the underlying.

Two factors have alluded to the rise in OI on September expiry which is BTC halving impact and the recent DeFi explosion.

Shaun Fernando, Deribit exec believes that the trend of OI spiking every quarterly expiry indicates a trend of an increase in liquidity in options. Lennix Lai of OKEx exchange believes the surge in OI seems to be a positive sign for better things to come for the crypto derivatives market as it reflects the entrant of more participants into the market.

However, when the contracts expired, price volatility was predicted which wasn’t. Lennix Lai gives the reason for the muted impact on the price to be the size of the options/derivatives market when compared to the spot BTC market, stating that ”the price influence is not as strong to create a large variance,” Another reason stated is that the put-call ratios haven’t been heavily skewed toward one side.

Fresh Predictions for BTC and Altcoins Trend in the Months Ahead

Presently, several technical analysts are keenly observing the jump in the BTC dominance index as an indication of an Altcoin market pullback. In the last couple of weeks, most small Altcoins and DeFi tokens traded down while stuck within the range as Bitcoin (BTC) price remained rangebound for weeks.

Presently, traders anticipate a slow Q4 for BTC as in 2018 and 2019, Bitcoin closed Q4 net negative. An analyst sees that In the near term, a boring Q4 of further downside from Bitcoin price could cause Altcoin prices to plunge further.

Michael van de Poppe, an analyst sees that the present slump is unlikely to end any time soon stating that crypto markets mostly see ‘boring and corrective’ phases in Q4. It was also noted that historically ETH bottoms in December and begin to climb in the first quarter. He predicted that “BTC dominance will climb, have an Altseason in Q1 2021.”

A trader who remained incognito as “Loma” stated that the last time Altcoins plunged this hard, BTC saw a large drop in a short period. Presently, Altcoins are plummeting while BTC and Ether remain relatively stable above their respective support levels.