by KryptoMoney Staff
in Events, News
0

With economic crises knocking at their doors, countries like Iran, Turkey, Venezuela, Argentina and Zimbabwe turn towards Cryptocurrencies such as Bitcoin to keep it all together. The hyperinflation in these countries has pushed the respective citizens to trust decentralized cryptocurrency more than their national fiat, both as a store of value and for transactions. A surge in Bitcoin popularity, trading activity and prices have been observed ever since the crises have taken a rougher turn.

The world’s third largest oil-producer has been plagued by U.S sanctions over the past few years. The local fiat currency, the Iran Rial (IRR) is severely affected by inflation, IRR’s 18% inflation rate seems modest compared to Bolivars’ 82,766%  inflation.

Over the past few months, the IRR/BTC trading volume has observed a rise from IRR 9.467 billion to IRR 19.796 billion, almost 109% due to rising Bitcoin popularity in the country.This is despite the Iranian government ban placed on cryptos in April. Upon comparing these figures with a country that shares a similar GDP with Iran, Thailand, has experienced only a 27% rise over the past few months.

Bitcoin plays second fiddle to Gold which has risen by 300% against the IRR over the past few months and replaced the U.S Dollars in local Iranian markets. A second place, despite the government regulations and other factors, says volume about Bitcoin/Cryptocurrency emerging adoption in Iran.

By May this year, the trading volume in the country was over $2.5 billion

The Iranian government plans to develop a state-run cryptocurrency, backed by their oil resources, similar to Venezuela’s Petro.

It was recently in news that Iran Government has official recognised Cryptocurrency Mining as an Industry. The news spread like a fire in forest and since then Bitcoin price and trading started picking up in Iran. With strong government interest and falling fiat currency, Bitcoin price touched $24,000 in Iran.

Notably, Bitcoins’s relative stability during the bear market has encouraged the Turkish citizens to put their trust in the token as a store of value, thus increasing the Bitcoin popularity in the country. A recent survey by Statista Suggests Turkey Has Higher Cryptocurrency Ownership Than The U.S.

While Turkish citizens still have access to the U.S Dollars, the country’s meager inflation rate of 15% isn’t enough to lead to massive crypto adoption like in Venezuela and Zimbabwe.

Venezuela has been plagued by the economic crisis and the hyperinflation more than four years now, which has been a key catalyst behind cryptocurrency adoption in Venezuela.

In 2003, President Hugo Chavez imposed capital controls, making it very hard for citizens to access the U.S Dollars that initiated the economic crisis. Subsequent US sanctions and further devaluation of the currency has rendered Bolivar in more trouble.

The number of Bitcoin traded on LocalBitcoins peer-to-peer (p2p) crypto-exchange has been on the rise in Venezuela since 2014. Just recently, Venezuela set a new bitcoin trading record by surpassing 500 million bolivars. According to the cryptocurrency exchange, Surbitcoin, the Bitcoin users in the country rose from around 450 in 2014 to 85,000 in 2016. While this might not be a ‘big figure’ this goes to show how the country’s citizens are tilting towards the token.

Things haven’t changed despite the introduction of state-controlled and oil-backed Petro cryptocurrency. Citizens prefer or shall we say entrust Bitcoin more that Petro as of now.  In fact, a recent report by Reuters suggests that Petro might be as good as a scam by a corrupted Venezuelan government.

More: Petro, The Venezuelan Cryptocurrency Has No Users, No Investors and No Oil to Back It Up

Though we majorly name Bitcoin, the leading cryptocurrency in the country is Dash as its low transaction fees and fast confirmation time features appeals to merchants in the country. Venezuela is closely followed by other South American countries, Brazil and Argentina in terms of cryptocurrency adoption.

The inflation rate in the country is currently at 31% but despite that cryptocurrency, adoption has been rather slow. The highest number of Bitcoin bought in 2018 using the Argentine peso, on the LocalBitcoins exchange, in a single week was 31 BTC.

Argentina has the sixth largest inflation rate in the world, while it ranks as the 45th largest Bitcoin trading country. Sweden has a  similar GDP and records a higher Bitcoin trading volume. However, the country has been among one of the early adopters of Bitcoin and numerous merchant stores in the country accept Bitcoin and other cryptocurrencies. Looking into the current situations the scenario is expected to turn around sooner rather than later.

One of the worst inflation in recent history, so much so that the government had to ditch its own national currency (the Zimbabwean dollar) in 2009 following the introduction of a trillion-dollar note. The citizens are allowed to use other currencies like the South African Rand, the Euro, the U.S Dollars, among others.

However, this has forced the government to impose capital control due to the scarcity of foreign funds. Leading to the rise of Bitcoin in Zimbabwe, notably the Zimbabwean Golix exchange even traded Bitcoin above the global average. The military coup and regime change have further strengthened the case for cryptocurrencies in the country.

The failing national currency and rising inflation increased the Bitcoin Popularity in Zimbabwe and caused a huge spike in the demand for Bitcoin in Zimbabwe and. Back in November 2017, when the price of Bitcoin was around $7000, the Bitcoin Price in Zimbabwe was $12,500 due to huge demand.

Which Country Trades The Most Bitcoin?

Here is a list of countries ranked according to the highest trading of Bitcoin:- 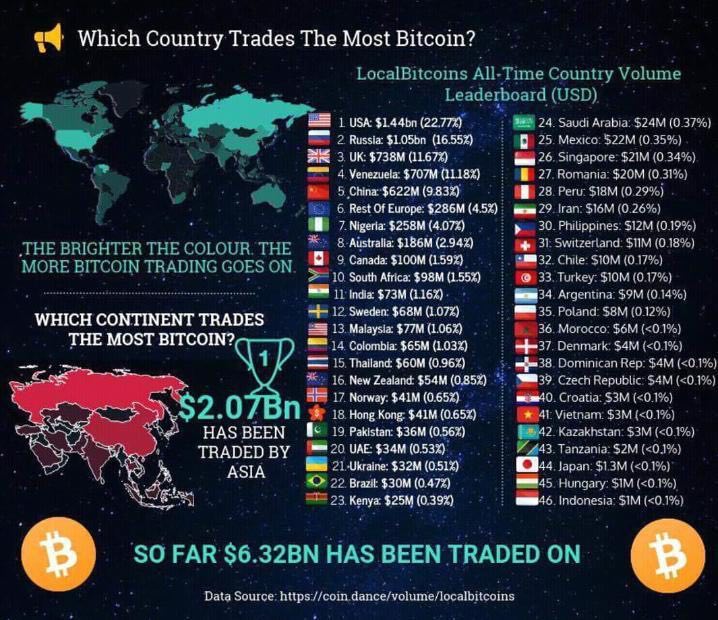 From a rise in mass adoption to State-issued Cryptocurrency to easing up the regulations related to Cryptocurrency, the ailing economies are increasingly recognizing and depending upon the digital assets. However, crypto adoption has still a long way to go as its volatility against the relative stability of fiat currencies still arises uncertainty in the mind of investors.

Get latest Bitcoin News and updates in KryptoMoney.com

Facebook's Blockchain Team Is Looking For "Head Of Business Development"