Graph of average Bitcoin transaction cost from Blockchain.com for the last 180 days

Due to the capacity of Bitcoin’s blocks which could only process 1MB worth of transactions at once, in such a scenario where up to 94mb of transactions are on the queue, users are forced to pay higher transaction fees to allow their transactions included in the next block and avoid the risk of being ignored by Bitcoin’s Miners, who have the propensity for higher-paying fees.

The rise in Bitcoin transaction fees is viewed as a source of concern because the bulls are not totally in the dominance of the Bitcoin market.

An analyst weighs in to explain the drive behind BTC transaction fees at this time.

Sergej Kotliar, CEO of Bitrefill explained that Bitcoin transaction fees rise could be traced to the post halving effect. BTC halving which is seen as a massive catalyst for bullish action by Bitcoin investors isn’t however the same with Miners who had their rewards halved from 12.5 BTC to 6.25 BTC. As a result some were forced to turn off their ASIC Miners which led to the mining of fewer blocks. Hashrate consequently fell by up to 30% resulting in higher transaction fees.

Secondly, he believes there is an unknown entity with the custody of a set of Bitcoin addresses controlled by the same private key that has been consolidating coins at the highest fee rates spending up to 72 BTC or $650,000 equivalent, on consolidating more than 720,000 transactions into a predetermined set of wallets.

Third, Kotliar posited that the recent volatility in the Bitcoin market may have contributed to the rise in transaction fees 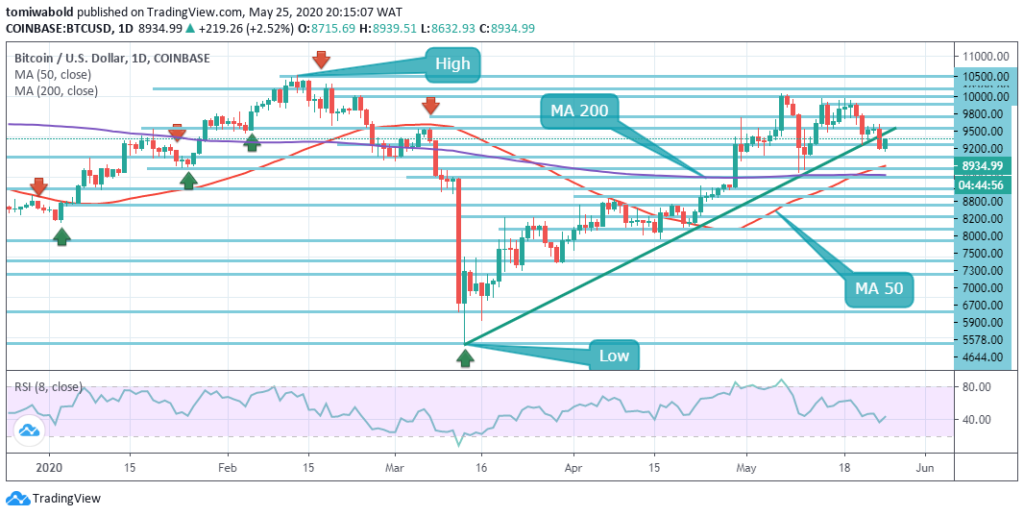 The breakeven cost of mining BTC now stands above $12,000 after halving which is in no way supported by Bitcoin’s recent price which is around $8,900 now which implies that Miners will have to sell a portion of their existing supply to cover operational costs.

Willy Woo, a crypto analyst stated that are two unmatched sell pressures in the market which are the Miners and Exchanges. Miners are seen to impact as they dilute the supply while the Exchanges tax the traders and both sell onto the market. Miners are spending more BTC than expected as seen in the Miner’s Rolling Inventory (MRI) which is reportedly above 103% implying that the selling pressure emanating from Miners may stall Bitcoin’s recovery in the near-term.