Tax On Bitcoin In Various Countries

Bitcoin, being a digital currency make it difficult for the government as well as for the people when it comes to the point of Bitcoin tax policies.

Luno, the most used Bitcoin Trading platform in South Africa also mentioned that any earnings earned in Bitcoin trading and investment would attract tax in South Africa. Also, when trading, the exchange suggested it’s users to consult a registered tax professional to ensure that they are following all the rules and regulation of South African tax policies.

Apart from Bitcoin trading and investment, any income which is received in form of Bitcoins would also be treated as regular income and thus would be taxed as per normal rates of income tax.

Bitcoin is yet not legalized in India. But is also not illegal. Bitcoin at present is just unregulated in India. The government has also constituted an inter-disciplinary committee to review and examine virtual currencies such as Bitcoin and submit it’s result to the government. Based on the results, the government will give it’s decision regarding the legal status of Bitcoin in India.

Bitcoin may still not be legal in India, it still attracts tax on it. “Even if bitcoins were illegal, income earned needs to be declared and tax paid,” says an I-T official.

Mostly all tax consultants and experts believe that the profits in sale of Bitcoin shall be taxed as Capital Gains, unless the person is in the business of trading Bitcoins, in which case it would be taxes as a Business income or Profits and Gains from Business and Profession.

The capital Gain tax treatment will be same as that in the gains made from Investments in Stocks and Shares. In order to compute capital gain tax, the income will have to be first classified as Long Term Capital Gain ot Short Term Capital Gain and then the relevant tax rates would be applied.

An example of calcluation of Tax on Bitcoin in India, published in a leading newspaper few days ago. 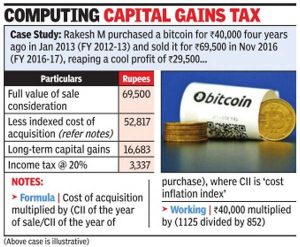 Japan have eliminated the consumption tax on Bitcoin trading on April 1,2017 when it officially declared Bitcoin as a legal tender. Japan also eliminated the possibility of double taxation on trading of Bitcoins.

A detailed article  regarding taxation of Bitcoin in Japan was posted a few weeks ago. Click here to read full article

The government also removed Double Taxation on Bitcoin when it witnessed a sharp decline in the interest in Bitcoin and other digital currencies in the country. The major Exchnages which used to operate in Australia has left the country and started it’s operation in Bitcoin- friendly locations such as  Singapore and Hong Kong.

While removing Bitcoins from double taxation policies, the government also kegalized Bitcoin and said it  can be used “Just Like Money”.

Apart from the above mentioned countries, Tax authorities in many countries, such as the US, Singapore, Hong Kong, Germany etc treat bitcoins a capital asset in hands of investors, with the sale resulting in a capital gain tax.

But if the indivdual is involved in daily buying/selling/trading of Bitcoins, any income derived from it would be considered as business income and taxed accordingly.

According to the Russia’s Central Bank’s deputy chairwoman, Olga Skaorobogatva, the central bank is preparing legal drafts and papers to recognize and monitor the transactions carried out in digital currencies.

Skaorobogatva also mentioned that “The preliminary draft regulation could be presented to the Russian State Duma, the lower chamber of the Russian Parliament, as soon as June”, while speaking at the Parliament.

She also stated that  “Digital currencies already circulating in Russia will see] certain regulations with regard to taxes, monitoring and reporting, as a digital commoditiy”

Russia may recognize Bitcoin by 2018.

Note: The above mentioned information has been researched and collected over the web. Readers are suggested to find out on their own in their respective countries about the taxation of Bitcoin and other virtual currencies.