by KryptoMoney
in Events, News
0

Amidst much tension looming over the horizon concerning Blockchain’s future in Indonesia and volcanic eruption, the ‘BlockBali conference‘ was completed successfully at The Trans Resort Hotel in Bali on 27th October 2017. Organised by Blackarrow conferences, following its stupendous success in Jakarta and Mumbai, the first ever international conference on the Blockchain technology hosted by Bali registered a complete ticket sale.

It brought together a lovely confluence of 33 nationalities coming from 24 countries consisting of 300+ participants. Participating countries included the likes of China, Malaysia, Spain, Austria, India, New Zealand, England etc. Attended by the bigshots of Blockchain community surpassing Indonesia and nearby ASEAN countries, the BlockBali emerged as a huge thinktank of crypto centric activities and discussions. Attendees received a very warm welcome through a traditional song and dance routine conducted by Balinese girls for making the event a successful one. A BlockBali Conference map was placed in the event campus wherein participant nations could mark their nationalities using red stick on dots.

Starting from technology players to Blockchain gurus everyone gathered under a unified roof in the BlockBali event to discuss about the prospects of cryptocurrencies in Indonesia along with the possibilities of Indonesia emerging as a dark horse in the race of becoming the biggest ASEAN crypto currency market.

The conference also benefitted from the presence of members of National Police Anti-Terrorism Unit Densus 88 and Bali Chamber of Commerce and Industry. Some of the important issues addressed were latest industry developments in cloud mining, integration of digital currency into business, counter terrorism funding etc.

The conference was started with a welcome speech given by Chairperson K C Kapadia followed by a presentation delivered by Stephen DeMeulenaere, the Co-Founder of Coin Academy. Dr Michael Yuan addressed the issue of malpractices conducted using this open source platform along with some insights regarding the business of decentralisation. Roberto Capodieci mesmerised the audience with his exceptional presentation on ‘Indonesia & the Blockchain Jungle’. Other eminent speakers of this conference were Roberto Capodieci of Blockchain Zoo, Matej Michalko of DECENT, Marco Krohn, Genesis Mining, Aram Barnett, Alluminate etc.

The immense success of the BlockBali conference was celebrated with two after conference parties held at the Sunner Dinner Catamaran Cruise and a plush nightclub of Bali. Genesis Mining & Cointed gave away prizes to the lucky winners of the raffle draw at the BlockBali Conference which was centred around thorough business networking.

Some of the companies participating in the BlockBali event were: 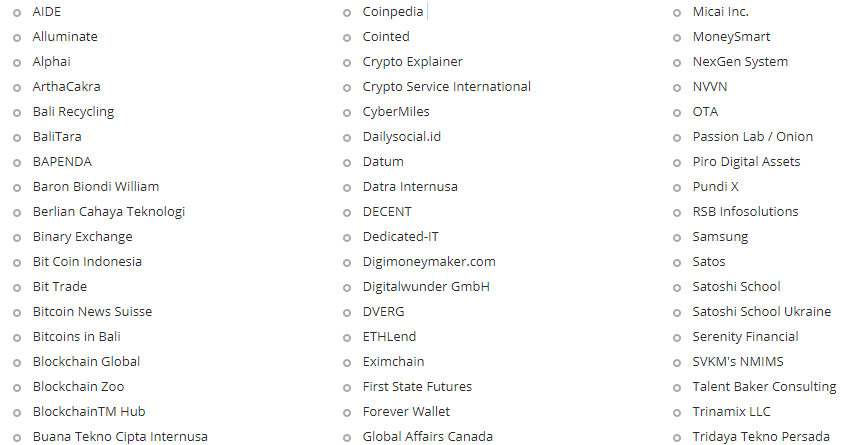 “Once again, Blackarrow Conferences surpassed themselves in organizing BlockBali 2017. This is the 7th conference in which we are partnering with them, and the conferences keep getting bigger & better. Great awareness building and networking opportunities, with a quality audience!” – Team Genesis Mining

“It was a pleasure to have been the only female speaker on the BlockBali conference. The event was an exciting opportunity to meet international experts. The organisation of the conference and after event attractions has been excellent. I want to thank the team of Blackarrow Conferences for their wonderful job.” – Jasmin Güngör

“The conference was spot on, it allows the audience and participants to understand current situation in regards to cryptocurrencies development in the world especially in Indonesia. Such an amazing conference, perfect location, insightful and important gathering for cryptocurrency community.” – Faisal – Serenity Financial / Grand Capital

KryptoMoney.com was the official media partner for the event.

Subscribe to our newsletters to know more about the upcoming Blockchain Conference to be held in New Delhi, India  which is also being organised by Black Arrow Conferences

Monaco Cryptocurrency Card Gets a Nod from Visa