Why Blockchain Might Become A Game-Changer For The Game Industry

by Guest Author
in News
0

A source of transparency – blockchain – can help address many problems on the current game market, from cyber theft to unfair revenue distribution models.

Gaming industry gradually shifted from a small niche for technical geeks to a multibillion dollar online industry for all. Of course, during this long evolutionary process this sphere became a host of new possibilities for entertainment and business.

Now video game market is very attractive to big business because it continues to grow.

Game market continues to grow due to several drivers. One of them – digital distribution platforms which allow developers to distribute their games around the world in a matter of hours, not days or weeks as it was prior to digital platforms appearance. 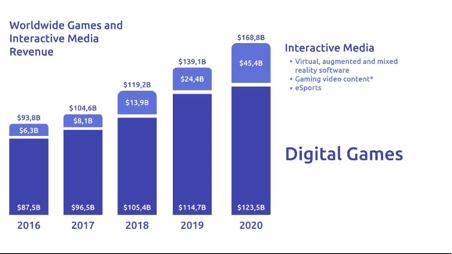 Now the video game market is dominated by Massively Multiplayer Online games (MMO). And this sector is growing very rapidly. Last year MO segment expanded by 13% and it will continue to grow very rapidly according analytics. For example, Global Massive Multiplayer Online (MMO) Games Market 2017-2021 report authors predicted that it will grow at CAGR by 7.7% during 2017-2021.

And digital distribution platforms is one of the main drivers of this growth. But it could be more rapid if market participants overcome some annoying obstacles. The most important ones are unfair and complicated revenue sharing models as well as difficulties in managing ownership of assets and dealing with fraud and cyberattacks. And these are only some of the problems that both developers and gamers have to deal with.

How blockchain technology can help?

Today we have a pretty effective solution – blockchain. Yes, this is the base of all cryptocurrencies such as Bitcoin and Ethereum. But it can also be used to deal with the challenges of the gaming industry.

It is a transparent and reliable platform which allows to building a transparent game economy. Of course, it remains a new thing on the video game market, but it is a very promising technology so now both developers and publishers are trying to apply it in many locations of game market. And there are some working examples:  GameCredits, MobileGo, Beyond the Void, Spells of Genesis, etc.

One of possible ways to apply the blockchain is preventing the duplication and cheating. Now some experienced gamers have gaming assets which could be sold for a solid amount of real money. But they often fall victim to fraud scams and cyberthiefs.  But this is only one example of applying the blockchain in the game industry.

It could be much more useful than just be a “guardian” for games. And here we can use another example – new project The Abyss . It can address some of the most of important issues for developers and gamers. This platform has a strong focus on free-to-play (F2P) browser and client MMO games. Both players and developers can earn from multilevel referral and motivational programs and here blockchain will make sure that this new-generation platform is safe and transparent for users.

And yes, gamers could earn from their hobby too. For example, the new system The Abyss has profound a 5-level referral system, which allows gamers to profit from their referrals. How? Through payments, achievements and some other activities of their referrals.

And, of course, developers will earn too. They will receive 70% of all payments made in their games. These payments could be used for any other game on the platform. Developers will have also some other profits from the Abyss. For example, they will be able to publish their games free on the platform with a pretty big traffic. Also they will have the access to the exclusive, advanced stat system and user insights. Referral system will allow getting payments even from gamers which already leave the game. 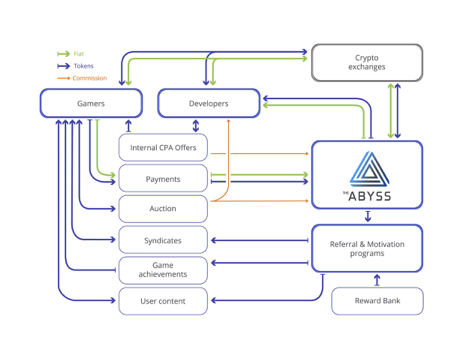 The Abyss platform is based on Ethereum blockchain and has its own token (ERC20 standard) which is the blood of the whole economic ecosystem of Abyss. Fiat money will also be acceptable. But tokens have more important role in this ecosystem than fiat money.

Anyway it’s not all about tokens but about new rules of games for all participants of video games market. These rules will help to solve many problems of gaming industry which now are pretty complicated and cannot be solved by existing tools or methods.

Blockchain is a game-changer which will pave the way for new types of games and business models. And modern platforms which are based on blockchain will transform the future of developing and playing games. The Abyss is one of these platforms which is pretty promising. Let the future begin.

Konstantin Boyko-Romanovsky is the founder of Destiny.Games video game company. He has more than 17 years of experience in the game industry. Konstantin is a successful blockchain investor, cryptocurrency expert, and technology enterpreneur.

Over The Counter Bitcoin Economy In China Booms Despite Warnings