Bloomberg Reports That Bitcoin Shows Sign Of A Crypto Overbought

The GTI Global Strength Indicator, a technical analysis tool that gauges intraday volatility suggests that Bitcoin (BTC) is in overbought territory, as reported by Bloomberg on April 5.

Earlier this week,patterns in the past posted a warning towards multi-week downturns. 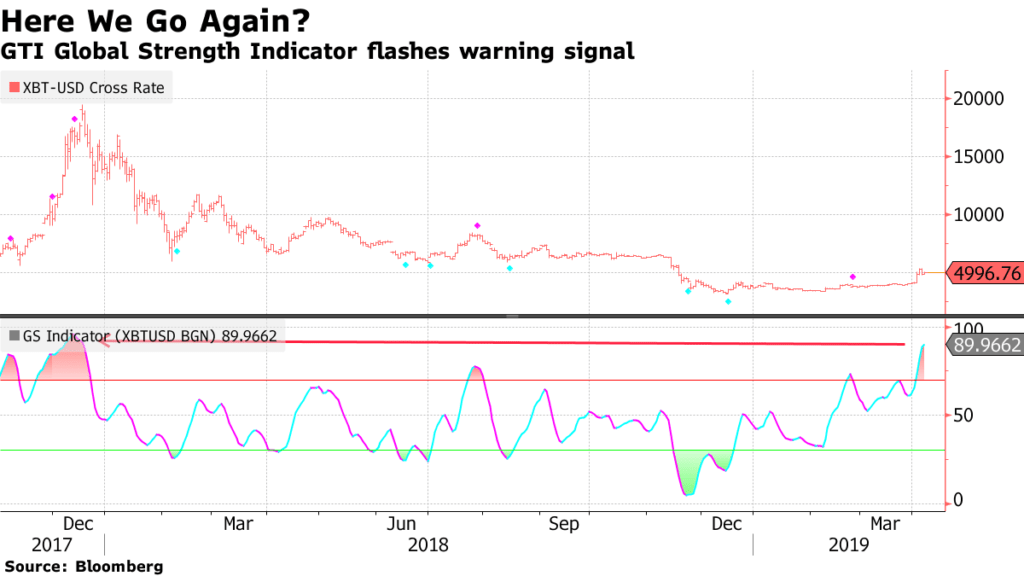 Mike McGlone, Bloomberg’s Intelligence analyst states that he’s looking to see the reaction of traders, whether they sell or plan to hodl after the recent rally.

“The market got so compressed, volatility was so low, it just went poof! It broke out. It was released from the cage. Now it’s a question of duration and I suspect when you have such a massive bubble, you’ll always have an overhang of people who need to sell.”

The president of crypto hedge fund ProChain Capital, David Tawil also shares a similar sentiment and stated that he’s looking for a correction:

“We continue to expect another leg downward. It’s nice to see a positive move as opposed to a negative move, certainly. But at the same time, for investor purposes, it’s not a particularly comforting move. Certainly, an investor would much rather see a gradual rise with constant floors in terms of downside being established, as opposed to a very, very quick run-up. It could easily be easy come, easy go.”

CEO of cryptocurrency exchange Zebpay, Ajeet Khurana agrees and asserts that the market sentiment is sitting on a razor-thin wall.

“We are at a unique point when the bets in the Bitcoin market are almost evenly split, with half of the money expecting an imminent doubling of price, and the other half a halving.”

Fundstrat’s recent analysis from the historically bullish research cites the token recent upwards action above its 200-day moving average as a key factor to watch. The firm’s analysis illustrates that whenever Bitcoin trades above its 200-day, the average returns over a six-month period are 193%.
Josh Rager, a crypto investor, and analyst, on the other hand, compares Bitcoin’s current path to its boom and bust cycle back in 2014-2015. As per him, if the history rhymes, Bitcoin would continue to trade sideways and begin to climb this summer.

If this were accumulation, this week's $1000 candle would be the exact middle of 216 accumulation days and would end on July 19th, 2019

A New Cryptocurrency Index of Gaming-Related Tokens Launched By AltDex