In a Major Selloff, BTC Entered the Strongly Oversold Zone

Top crypto asset by market cap, Bitcoin didn’t fare so well since the week’s start. After bleeding from the carnage it experienced last weekend plunging from previous highs of $9,200 to sub $8,400 after which it declined further to mark a bearish trend, shedding off 18% since, over the weekend, it had a slight rebound to $7,950 declining further to end at $7,700 as the bulls ran out of steam.

However, in a swift, Bitcoin nosedived from its key level of $7,700, flunking around its support to trade as low as $5,578 further receding south, shedding 17% in one hour.

The stock market faltered when President Trump in his latest address revealed suspending all flights from Europe to the U.S in response to the coronavirus. (This flight ban does not apply to goods). In the news wake, the S&P 500 (ES) and the Dow Jones (YM) futures plunged.

The Crypto markets followed in tandem with the stock market today as market cap fell by 7.1% to stand at $209.7 billion and daily trading volume fell by 1.98% (though steadily recovering) following W.H.O declaration of coronavirus as a global pandemic. Coronavirus fears heightened in the news wake of NBA suspension of its session and Tom Hank’s recent contraction of the disease. 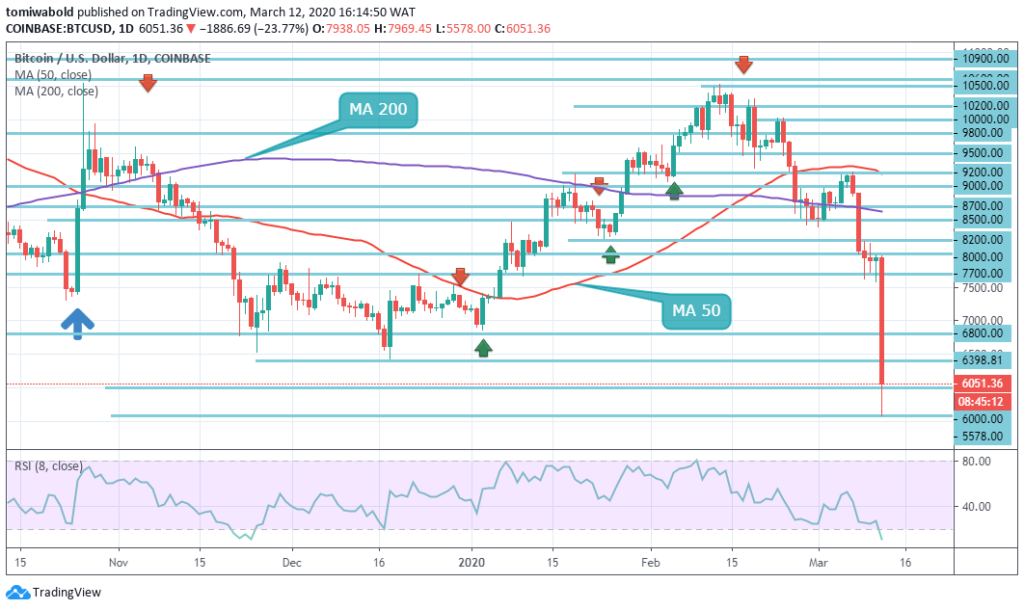 At the moment, the overall market sentiment stays bearish; Bitcoin whose price activity had been correlated with the stock market tumbled down as the stocks plunged. In a major selloff, BTC entered the strongly oversold zone. If the bulls do not reclaim the $6,400 level, analysts predict a plunge below $5,000, erasing the gains of 2020.

Though the macro outlook looks gloomy as seen by the rise in coronavirus incidences globally, and the fears of global recession from the stock crash, an analyst sees BTC returning to $4,000 while others, however, believe that all hopes are not lost for the asset as they see an imminent bottoming.

Nik Yaremchuk, an analyst at Adaptive Capital, who saw BTC’s correction to $9,500 and its decline to $7,500 sees BTC bottoming its chart in coherence with analysis of Richard Wyckoff, a renowned technical analysis expert. According to the portrayal of events as postulated by the expert, BTC will recover and trade sideways at $7,700, then drop slightly to a fresh low near $7,500, afterward recover to break out of the consolidation range at $8,200.

Other traders too believe BTC is going to recover to $7,700 support level which is of the essence to miners. Some analysts see BTC finishing off the Wyckoff Accumulation pattern seen late December to early January which may spur a comeback near $8,500.

Analyst JB sees a concurrence of technical analysis signs indicating a potential recovery. The “willy” indicator last seen when BTC hit its bottom in December at $6400 is oversold indicating bottoming and a potential rally.