The crypto-currency market was drawn with one large bearish wave driven by Bitcoin, the largest cryptocurrency. Selling pressure weighed in on BTC price as it plummeted from $10,000 highs on Saturday to $8,106.70 intraday lows on Sunday. The market selloff unfolds fewer than two days before the 2020 block reward halving. The leading cryptocurrency soared past $10,100 previously, convincing buyers that there is a rebound that is halving-triggered soon. BTC/USD trades 10.23 percent lower on the day at the time of writing, stabilizing at $8,690.68. In just two days to spare to the third halving, extreme uncertainty returned to the cryptocurrency market and Bitcoin tumbled by 20 percent. Similar market changes occurred in July 2016, when BTC initially plummeted by 11 percent two days before the actual second halving.

*Selling pressure weighed in on BTC price as it plummeted from $10,000 highs on Saturday to $8,106.70 intraday lows on Sunday
*BTC/USD trades 10.23 percent lower on the day at the time of writing, stabilizing at $8,690.68
*Similar market changes occurred in July 2016, when BTC initially plummeted by 11 percent two days before the actual second halving. 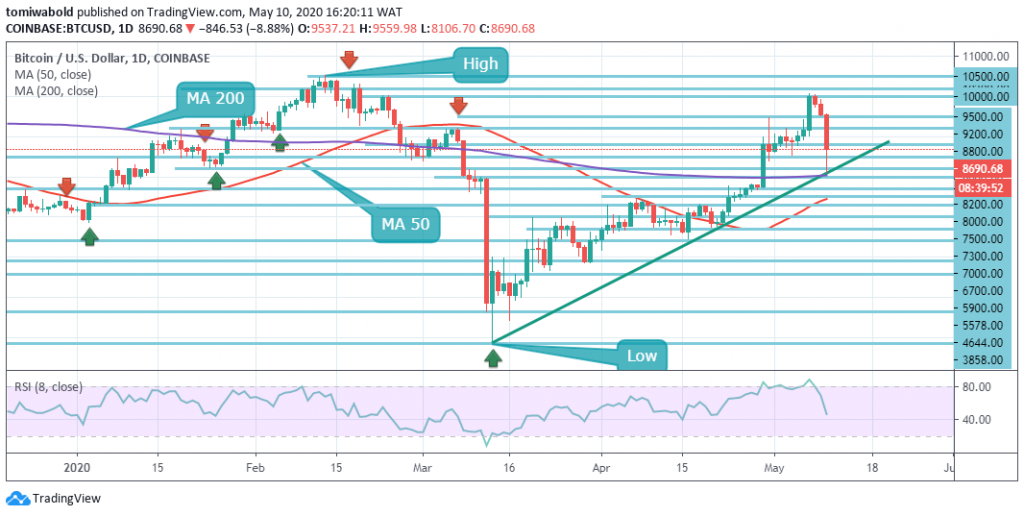 Impressively, the price of Bitcoin rebounded off the threshold of 61.8 percent to switch hands at $8,690.68. The above implies the buyers’ ability to buy more than $9,000 in expectation of recovery. The price also holds at the MA 200 ($8.047)  position. But, despite the rebound from the intraday lows, the pointed trajectory of the RSI implies that selling pressure remains severe. Bulls presided over to take Bitcoin further than $8,500 after the fall. Simply put, buyers may be willing to buy low, as they focus on further post-halving returns.

Other regions of support to take into account furthermore include $8,200, and around the MA 50 and $7,500. The spike to levels beyond $10,000 appears to have been a great catalyst for a pull, as the volume stayed technically unsustainable. Many levels of importance to Bitcoin, aside from the aforementioned support, comprise $7,300, 38.2 percent, $6,700, and $5,900 levels. 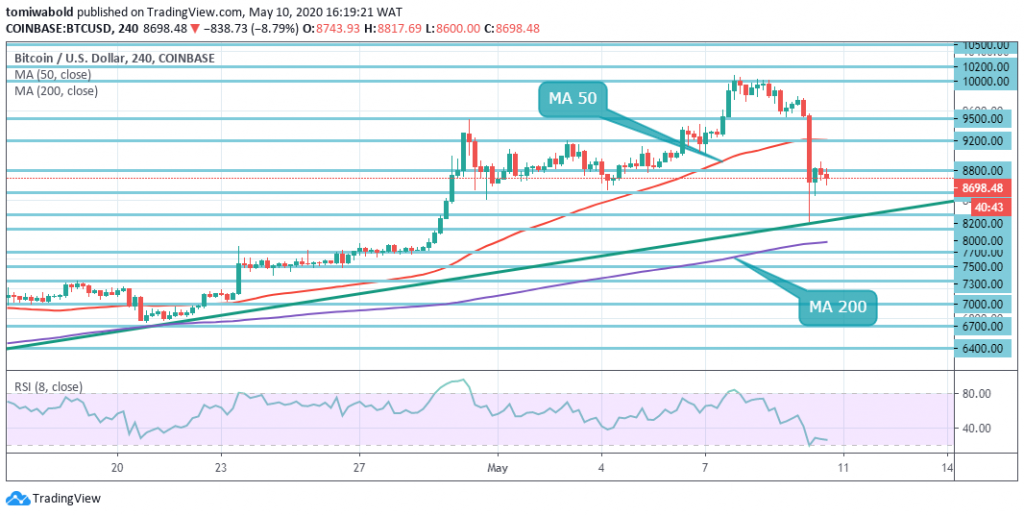 Bitcoin may have initiated a near-term technical reversal since buyers have struggled to keep prices beyond the $10,000 level of resistance that is psychologically relevant. When bulls continue to push price back beyond the $9,200 level then re-testing levels of $9,500 and $10,000 remain the next bullish goal. As we see the recent selloff going on then sellers of BTC/USD may need to push price underneath the $8,000 level to trigger additional declines.

The BTC/USD pair may only be bullish when trading beyond the level of $9,200; the main resistance is seen at the levels of $9,500 and $10,000. When the BTC/USD pair moves beneath $8,500, then sellers may test the support levels of $8,200 and $8,000. Irrespective of the consensus, it is probable that the halving may hold price instead of shift, whatever way the market swings.