Cardano (ADA) 10th cryptocurrency by market cap saw a huge price jump as large as 60% when Cardano co-founder Charles Hoskinson revealed the roadmap for the Shelley upgrade. The Shelley rollout plan is a step by step process that will eventually culminate into the Shelley mainnet launch on July 29th.

The days ahead will see to activities centered around “wrap up” of the pioneer Testnet, where the Cardano team and stake pool operators will explore how to progress the Testnet to the next level.

Charles Hoskinson however sees the recent upgrades as the biggest change in protocols from any blockchain project, likening it to when ripple changed its consensus protocol.

With Shelley launch date barely less than a month away, ADA price has seen a significant rise from $0.055 to $0.088 and daily trading volume increased by up to 400% which has led to Cardano (ADA) and Tezos (XTZ) jostling for the 10th position of the largest cryptocurrency by market cap. In an interesting tweet, Hoskinson likens this to the well-known fight between Gandalf and the Balrog in Lord of the Rings. 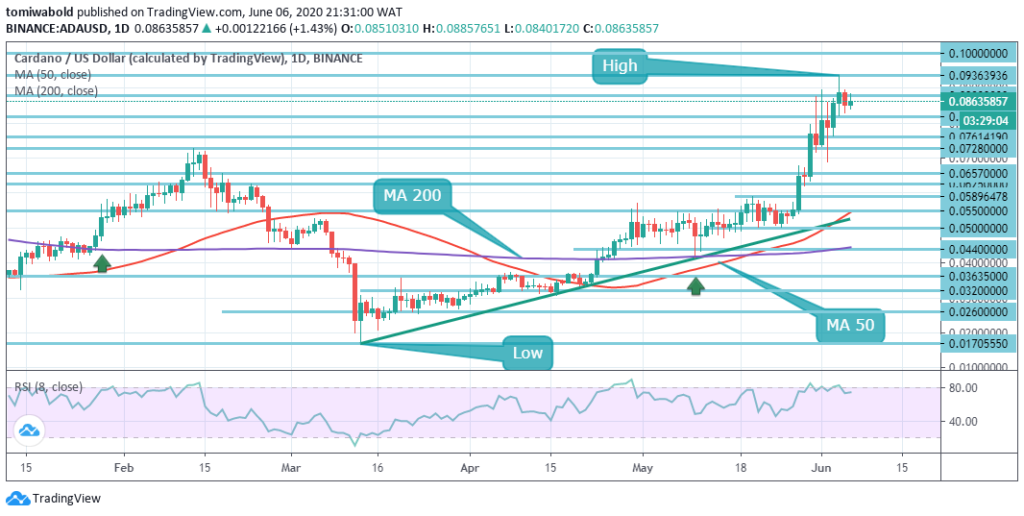 At the time of writing, Cardano is trading up by nearly 2% at its recent price of $0.086. It’s also up by 1% in its BTC pairing. Cardano (ADA) price reversal follows in tandem with the rest of the market as the entire crypto market is swept with a brush of corrections. Cardano bulls also ran out of steam as they pressed against HTF (high time frame) resistance level which analysts believe could lead to price correction in the weeks and months ahead.

Cardano Bulls Press Against Key Resistance With the Last Ounce of Strength, but It’s Far From the End

Intotheblock coin metrics “In/Out of the Money” data seems to suggest that Cardano (ADA) weightiest near-term barrier is still way above from its recent price levels which indicates that Cardano bullish momentum may be sustained till it reaches a rebuff. The indicator revealed that there is just a slight opposition until ADA price reaches nearly $0.11 while pointing to near-term resistance between $0.085 and $0.093.

This activity of the bulls has spurred ADA to be among the top gainers in the crypto market, but it doesn’t augur well with its mid-term trend as it approaches an HTF resistance level as indicated by an overextended RSI.

Analysts have noted that Cardano bullish momentum may be sustained in the near term if it breaches the $0.093 and $0.100 resistance levels which will give insight into its price activity in the days ahead. This is coming subsequently after Cardano (ADA) showed signs of decoupling from Bitcoin which has been viewed as a firm guide for the rest of the cryptomarket.