Cardano (ADA), the 8th largest crypto asset by market cap begun the month of July on a good note. Last Friday, ADA in a bullish wave hit intraday highs of $0.1025, reaching its 2020 all-time high. This was a continuation of the bullish momentum it incurred on July 1st when ADA price rose from $0.0822 to $0.0978.

Though Cardano (ADA) is trading slightly down from its recent highs, however a confluence of factors is building which may spur Cardano (ADA) price further in the days ahead. Come July 29th, Shelley which is Cardano’s next phase of development will arrive. 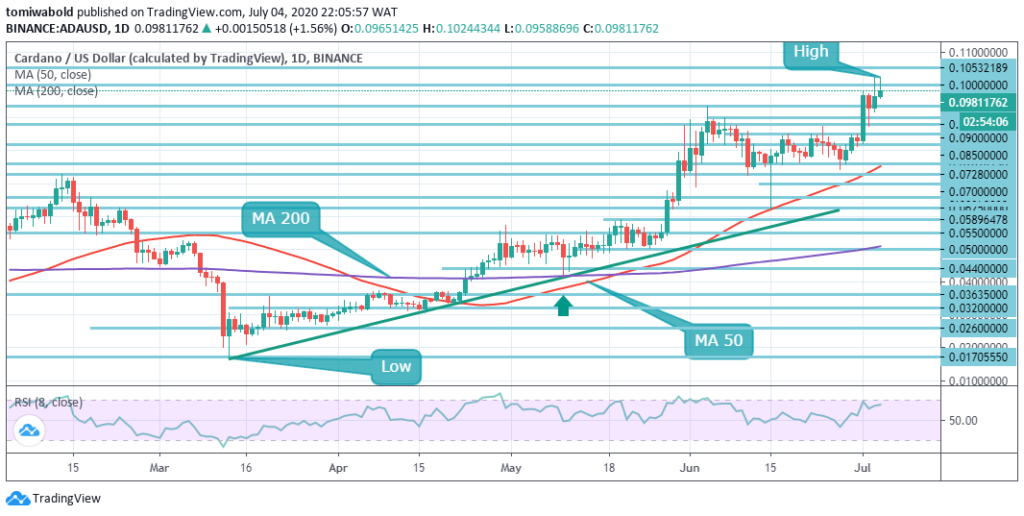 Smart Contracts “Mania” Seems to Be On

When Ethereum surged to $1,400 following the ICO mania In 2017 and 2018, smart contracts were seen as the next big thing in cryptomarket.

However, a regulatory crackdown on ICOs in 2018 saw the advent of a bear market which ultimately affected the prospects of smart contracts. Two years on, it seems that the smart contract mania is back.

Recently released data from data aggregator, Messari reveals that many smart-contract crypto assets have seen incredible performances in 2020 even outperforming Bitcoin since the year’s start.

ADA is up 157% since the year’s start while BTC is up by nearly 25% which indicates an underperforming Bitcoin.

After years of development and months of testing and optimizing, Shelley has finally arrived. At the Cardano virtual summit, the code for Shelley was released. Deployed on July 1 is node software that has all of the Shelley features which will go live when a hard fork occurs on July 29th.

It was also disclosed at the event that Coinbase will eventually support ADA staking. All this adds up to positivity for ADA as commentators on the space are positive about the upgrade.

Bill Barhydt, Abra CEO commented on the Cardano upgrade and its impact on the crypto space in a recent blog stating:

“Many are super bullish on the project and expect great things while others consider the project vaporware such that any failure to deliver would result in a precipitous drop in the token’s value. My take is that competition in the cryptocurrency space is always a great thing and is exactly what we need to accelerate the pace of adoption and improvement.”

However, he isn’t the only one talking about the competition here, Charles Hoskinson, Cardano founder recently stated that Ethereum may soon feel pressure from Cardano due to the upgrade.