Cardano (ADA): What You Need to Know About ADA Price, Voltaire and Cardano Investor Concerns

Cardano, the 8th largest crypto asset by market cap recently announced the launch of its much anticipated Shelley upgrade. This marks the transition from Byron to Shelley Era through a hard fork.

Shelley is expected to decentralize the Cardano network while also providing increased scalability. Users will now be able to cold stake ADA directly from their Ledger hardware wallets while expecting to earn around 5% APY on their staked ADA.

Charles Hoskinson, CEO IOHK in the wake of Shelley stated his optimism explaining that he expects “hundreds of assets” to be running on Cardano within a year’s time frame.

“This time next year I predict there will be hundreds of assets running on Cardano, thousands of DApps, tons of interesting projects, and lots of unique use and utility…”

Undoubtedly, Shelley’s launch is a positive milestone for Cardano but there are still widespread debates on the impact on Cardano’s adoption and utility. 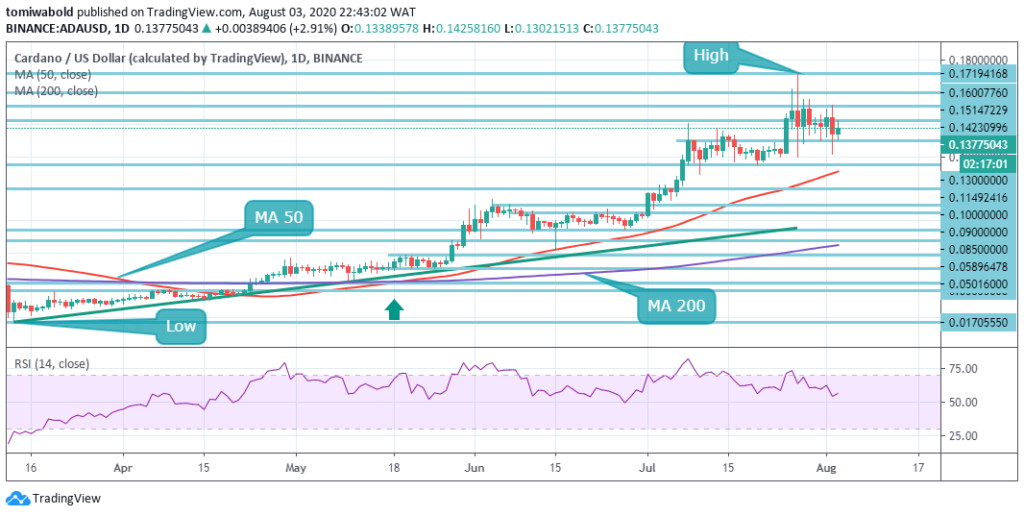 In the past few days, ADA has been closely monitoring the price action seen by Ethereum and Bitcoin. Yesterday, Cardano (ADA) experienced a sharp drop in concurrence with Bitcoin’s dive from its highs of $12,000, to trade at $0.1214 low level.

However, ADA rebounded and found strong support at $0.13 and bulls have been seen to defend this territory several times since the previous day.

The addition of ADA staking capabilities to Coinbase Custody expected to occur in the latter part of the year could also have a positive impact on ADA price action.

Voltaire, Cardano’s governance era is the final phase of its development. Built on the remnants of the Shelley Incentivized Testnet (ITN), Voltaire will exist first as a separate chain and then as an indivisible part of Cardano, enabling its users to submit and vote for everything from deep changes to Cardano’s monetary policy to funding developers working on quantum-resistant algorithms.

Hoskinson stated that Voltaire isn’t a separate governance protocol. It refers in totality to a collection of utilities, concepts, and experiments that allow Cardano users to collectively make decisions about things such as changes to the blockchain and fund spending.

While all of Cardano’s users can participate in the governance process, they will need to register for their votes to become eligible and lock them. However, there’s still no clear schedule for when Voltaire will become an essential part of Cardano.

Following Shelley’s launch, there are concerns whether or not it will truly help the blockchain garner widespread adoption. Another source of investor concern is Cardano’s low transaction volume which implies it seeing one transaction every ten seconds.

Kelvin Koh of Spartan group thinks ADA is overvalued regarding its market cap due to its low transaction volume. ADA market cap stands at $4 billion. He stated this while referencing the market valuations of its keen competitors which is between $1 billion and $2.9 billion. ADA however has a comparative advantage of a stronger community and investor base which explains its higher market cap.

However, the recent Shelley upgrade could be a factor that may proffer solution to its low transaction volume while boosting utility and the utilization of the Cardano blockchain.