Chainlink, a blockchain agnostic tool, is a decentralized oracle that fetches real-world data to connect smart contracts on the blockchain. LINK is the Chainlink’s native token for payments.

Since the start of August, LINK has been on a bullish move, extending its momentum at every count as it continued to set a fresh record of highs almost every week. Chainlink went ahead up from its $7 lows at the start of August to set new highs of $20.00 today, gaining more than 178% in the process.

This isn’t farfetched as Chainlink has been making partnership and integration announcements relentlessly throughout the year.

However, Chainlink’s success has attracted critics and competitors to it, an instance is that of Zeus Capital which alleged a price pump by Chainlink, but it kept on soaring, setting fresh highs continuously, outshining the ring leader of cryptocurrencies, Bitcoin. 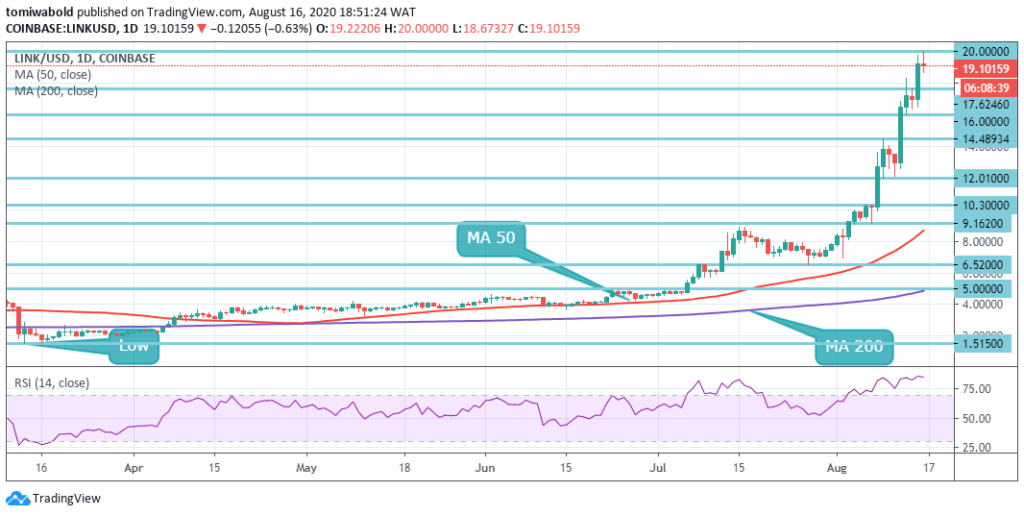 Chainlink is presently trading at $19.10, slightly down from its intraday high of $20.00. A Brush of correction is seen across the cryptomarket at the time of writing.

Chainlink’s explosive growth trend has been attributed to two factors. First is the recent DeFi explosion. Chainlink is a reputable player in the DeFi space providing external data feeds, therefore growth in the DeFi sector means positivity for LINK.

Chainlink has found its use case in several DeFi apps as well as blockchain games, betting platforms, digital identities, and golf games. 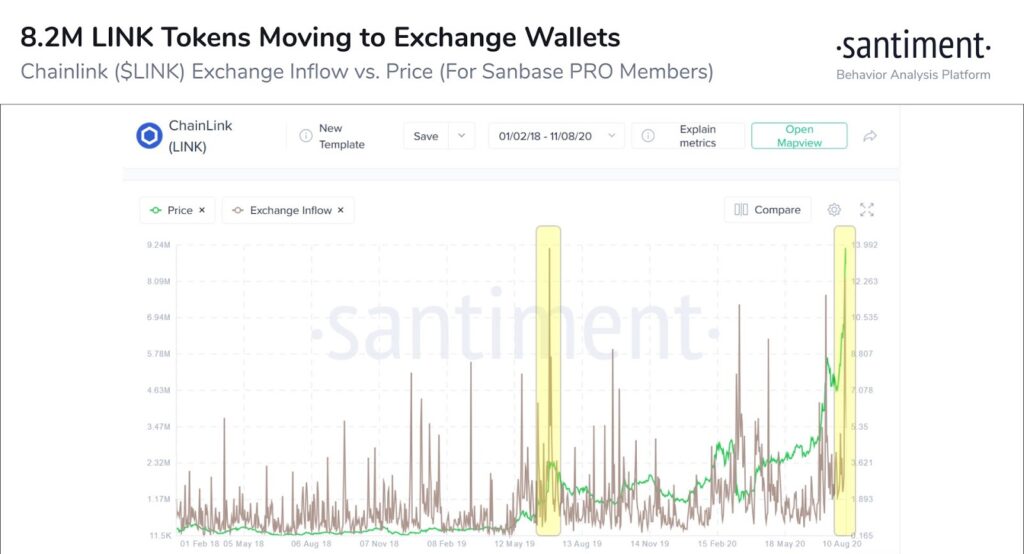 Google trends indicate that popular interest in Chainlink is at an all-time high in the United States and globally.

Despite this bullish sentiment, some on-chain data is suggesting that LINK bulls may soon take a breather. It recently indicated that the number of LINK deposits into crypto exchanges hit an all-time high (ATH) of 8.2 million, as at the time LINK traded at $15.

Recently released data on Github noted that Chainlink developers had the most code “commits” over the last 12 months.

Its official Chainlink $LINK is the KING of Crypto. 1st place in terms of Github developer commits over the last 12 months!

The project’s Github page indicated 11,588 total commits which refer to changes/additions made to the source code. There are over 54 contributors, while the computer language Go makes up 50% of the code, as per Github data.

High developer activity means that a project that is “alive” and well-sustained, compared to the numerous “Deadcoins” and abandoned projects in the broader crypto market. It also noted that there are 16 open issues developers are presently working on and two “open” projects.

LINK Has Unarguably Outperformed Bitcoin in Price Gains: In August 2020 alone, LINK has gained more than 68% for investors, compared to Bitcoin’s 25%. This makes LINK one of the top-performing cryptocurrencies for August, beating Compound and YFI.

Since the beginning of the year, LINK investors have gained more than 700% in comparison to Bitcoin’s 61% overall increase. In the past 48 hours, Chainlink gained almost 13% outperforming Bitcoin’s 0.5% performance.

Days back, data aggregator Messari, indicated that Chainlink was the most traded cryptocurrency on Coinbase Pro as LINK volumes dominated those of Bitcoin. This historic move indicated a greater retail presence for Chainlink.

Chainlink seems to have several positives on its side as seen in the strong code commits record token prices, and even a recent endorsement from social influencer Dave Portnoy.

Its plethora of partnerships across various firms and accolades received from international bodies, such as the World Economic Forum (WEF) have also spelled positivity for the decentralized oracle.