The authenticity of any cryptocurrency transactions get validated through mining which rewards the miner with a brand-new crypto. Asymmetry serves as one of the biggest features of the puzzle which the miners have to solve under the Proof Of Work system. This concept has also been popularised by the name of:

For claiming rewards, the miners belonging to a particular network compete amongst each other to be the first ones to come up with the solution. The miners making use of brute force under the Proof Of Work mechanism have to undergo numerous attempts for coming up with the right answer. The miner announces his results on the ledger after solving the problem and receives a fixed quantum of crypto as a reward.

Proof Of Stake (POS) on the other hand is about validating and the algorithm determines who gets to create the next block. However, it is mandatory for the selection process to distribute voting shares properly or have some form of randomness attached to it. Every validator owns a certain stake under this form of network for example ether bonding in the case of Ethereum. Users who wish to undertake bonding stake deposit a certain amount of money in the network and use the same as a collateral to vouch a certain block. Thus, the validity of a chain gets ensured in a Proof Of Work system courtesy the heaps of work backing it whereas in the Proof Of Stake mechanism, the chain having the heftiest collateral is depended on the most.

Proof of Work Vs Proof Of Stake 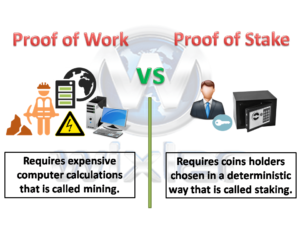 Efficiency of resource usage also stands out as another point of difference. Enstine Muki, the author of BlogExpose firmly believes in the fact that:

“Any system based on Proof of Work relies on energy use. According to a bitcoin mining-farm operator, energy consumption totalled 240kWh per bitcoin in 2014 (the equivalent of 16 gallons of gasoline). In a recent research, experts argued that bitcoin transactions may consume as much electricity as Denmark by 2020. Moreover, these energy costs are almost always paid in non-cryptocurrency (fiat currency), introducing constant downward pressure on the price.”

This implies that when it comes to energy efficiency, Proof Of Work mechanism ranks comparatively low thus hiking up its end cost. This makes this concept all the less lucrative in being used under a network where the main goal remains to reduce the dependency on third parties.

Existing range of Proof Of Work blockchains like Bitcoin resort to pre-agreed creation of coins to mitigate these expenses. Thus, at the end of the day, Proof Of Stake can be readily termed as the better option when compared to the un-eco-friendly Proof Of Work mechanism. The former functions on the basis of an agreement existent within the blockchain architecture measured by the quantum of digital currency agreeing with the current state in place of computing power. Thus, it brings along limited energy consumption providing us with a pathway to implement a decentralized ledger whose security parameter is not dependant on expensive computation.

“Zcash is the first open and permission-less cryptocurrency,” based on blockchain technology providing a unique transaction method based on efficient and complex cryptographic protocols. It makes use of two different addresses – the transparent T which can be viewed by everyone on the blockchain & the shielded Z having no third-party access. Based on Equihash Proof of Work algorithm developed by Dmitry Khovratovich and Alex Biryukov, Zcash states that the coin curve’s supply is a mirror image of Bitcoin’s curve. However, the quantum of ZEC created per block will be a quarter of BTC created per Bitcoin block since the blocks are mined 4 times more frequently by Zcash compared to Bitcoin.

This potent fork of Zcash was led by Rhett Creighton who wishes to remove the slow start and levy of 20% fee. This altcoin retains optimum functionality by retaining the privacy of parties to the transaction and amount transacted. Its enhanced privacy comes as a direct effect of its ability in generating Z or shielded address as an alternative to the standard T or transparent address. Transactions belonging to both address types can be redeemed into end results of each category. Z addresses make use of Zero-Knowledge Succinct Non-Interactive Argument of Knowledge or zk-SNARKs for maintaining the privacy of transactions. These proofs do not reveal which units are owned while providing evidence of ownership.

By leveraging the best minds belonging to the spheres of governance, technology and community building, this TLS end-to-end encrypted money network operating under the cloak of anonymity was launched on 23rd May 2017 as a resultant of the ZClassic fork. Thus, all Zencash owned prior to reaching the block size of 110000 was paid ZenCash in the ratio of 1:1. This airdrop styled approach brought community support to ZenCash while preserving ZClassic. This altcoin can also be utilised to bring along anonymous and secure publishing which can help users create post without revealing their true identity.

Reward halving period: every ~4 years, as per Bitcoin

This decentralized crypto is based on transactions which are recorded by secure and private consensus. It makes use of features such as stealth addresses, ring confidential transactions and ring signatures for providing adequate privacy. This fungible crypto relieves the cumbersome process of evaluation time and again and ensures that all its transactions remain completely untraceable and unthinkable.

This crypto introduced in 2014 facilitates micro-transactions in a super-fast manner and shells out a return of 10% on an annual basis. This desktop wallet empowers its users with earning capabilities on the passage of 8 hours from the movement of coins to the staking wallet. Its low market cap provides ample opportunities of going up thus providing users with high annual return.

Previously known as “Antshares,” this non-profit based blockchain project digitizes assets by making use of its digital identity and blockchain technology. It uses smart contracts for automating the management of digital assets and realization of a “smart economy” within the distributed network. NEO makes use of a delegated Byzantine Fault Tolerance (dBFT) for maintaining system consensus even when malicious intentions are bared by some nodes.

This fully functional Proof of Stake crypto operating since 2014 is built on the skeleton of Bitcoin Core with extra features and functionality. Users can opt for enhanced privacy courtesy the dual blockchain while engaging in transactions which require 30 seconds to complete. 40% of the 62M NAV is used for staking thus generating 1.24M NAV every year.  A yearly return of 5% is offered by NAV Coins.

This social current enriches the social life of people by making it easy for general public to use the same. Reddcoin integrates the digital currency platform along with every major social network for making the entire process much more rewarding for everyone. This tipping platform helps users in rewarding anyone for content of their choice. The Proof of Stake Velocity algorithm used by Reddcoin encourages both activity (velocity) and ownership (stake). The algorithm provides preference to the head block for reaching quicker consensus. The amount to be staked does not come with an upper cap.

The hybrid system will start alternating between dual systems to keep certain transactions secured through proof-of-stake whereas others shall follow proof-of work mechanism.

These projects are believed to make staking more popular in days to come since it does not require the backing of expensive hardware.

"I Have a Huge Amount of Conviction in Bitcoin" : Ajeet Khurana