In the Past Weeks, Market Cap Took a Steep Decline Shedding 50%, Losing $150 Billion Within Days

There is no gainsaying that since the outbreak of the coronavirus, the cryptocurrency market has been dealt a huge blow. In the past weeks, market cap took a steep decline shedding 50%, losing $150 billion within days.

Top crypto asset by market cap, Bitcoin suffered the carnage as it saw one of its worst sell-off shedding nearly 40% within a 24-hour range. Not a single cryptocurrency was left out of the activity of the bears, as most shed 50% or even more of their market value. Though BTC and others had experienced slight rebounds in the last few days, there remains a lot to cover to reclaim lost territories.

The COVID-19 impact also spread its tentacles to the area of funding, for instance, most Altcoin projects get their funding mostly through ICOs (initial coin offerings) in which they sell their digital currency or token to pay for development and marketing efforts. In the event of a price decline, the quantity of funds available at disposal goes down south. For crypto projects comparatively smaller, they will have to churn in a lot to stand financially, which in the event of a crypto meltdown, it may invariably shut down, and the fact that they may not be able to profit from central bank liquidity pumps and the zero-interest rates may contribute to this.

Invariably, these blockchain startups had to resort to VCs (venture capital) for funding which had proven to be a herculean task as personal meetings to verify investments were impossible.

Adaptive Capital, a cryptocurrency hedge fund, reportedly had a close down after suffering huge losses from the March 13 market carnage when BTC hit its New Year low of $ 3,858. 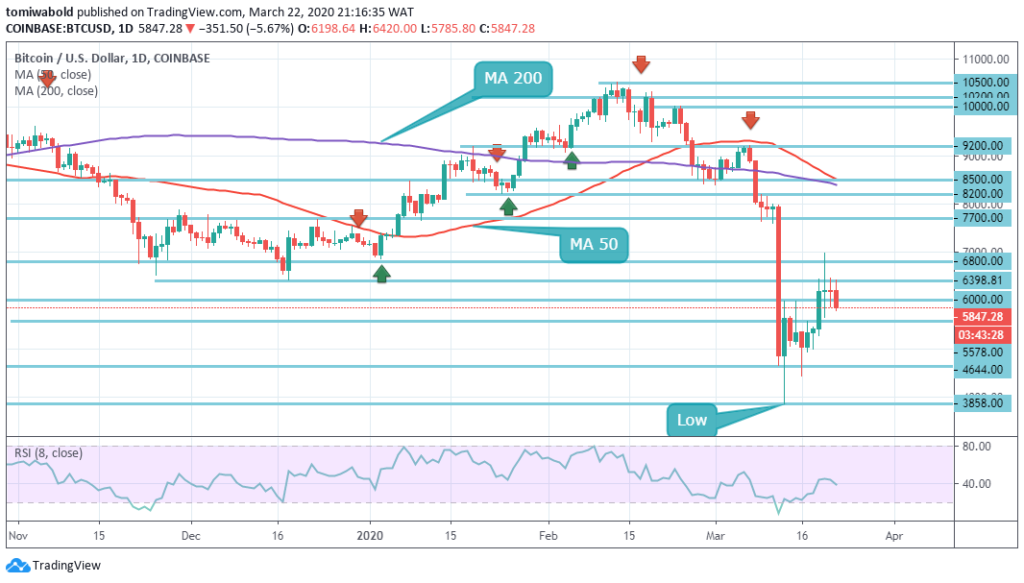 In the wake of the coronavirus pandemic, most blockchain conferences have been canceled with the organizers hit financially Some however resorted to virtual event hosting.

However, Crypto exchanges had trading volumes ramp up as volatility increased. Also, Stablecoins usage has been on the rise over the past weeks especially dollar-backed coins like Tether USD (USDT) and USD Coin (USDC) which saw massive inflows as the risk-on appetite of investors was deflated, even smaller Stablecoins like Binance USD and Paxos Standard had their market caps shot up.

Interestingly, Morgan Creek Co-Founder, Anthony Pompliano isn’t too surprised as he had anticipated a market downturn since mid-2019 and that the response to this quelling situation would be huge rate cuts and major quantitative easing which will make Bitcoin to shine. This, he predicted to happen concurrently with the halving event.

Halving May Witness a Delay

TokenAnalyst noted that the recent plunge in BTC price may have caused miners to switch off some of their equipment to save costs. Subsequently, this slowed down the average daily block time by nearly 70% as the BTC hash rate plunged to nearly 82 quintillions hitting December 2019 low.

The average block time required before is about 8 minutes which has now jumped to 14 minutes averagely. This is seen to affect the upcoming halving date marked for the 630,000th block which was predicted to occur late April, now most are pushing forward the date to 13th May.