Though last week began with the bearish trend in the crypto market persevering, the week ended on a good note. On Wednesday, the market lost as much as $2 billion in market cap.

However, Friday brought some good news with entities recording some significant gains to put smiles on the faces of the crypto community.

It was so delightful to watch Charlie Lee’s Litecoin rise more than $300 million within a few hours to become the 4th most expensive cryptocurrency. This sharp upsurge ensured the silver of Crypto bagged the highest growth rate for the week.

Moreover, Bitcoin keeps achieving an admirable bearing concerning stability. The first market mover maintained a price movement between $3300 to $3500 from Monday to Friday.

On the policy front, the ecosystem scored a major victory when the Italian Parliament approved a bill that defined distributed ledger technologies (DLT) like blockchain on Thursday. Known as Agenzia per l’Italia Digitale, the bill will allow Smart Contracts to have legal gravity.

The setback for the week was when it came to light on Tuesday that QuadrigaCX’s CEO, Gerard Cotton has passed into memory in December with the private keys of the Exchange. Media reports hinted that users of the platform are set to lose $145 Million, a clear indication of Centralized exchanges as a square peg, in a Decentralized space of a round hole.

Also, within the week, Japan’s Financial Services Agency (FSA) in a report revealed inquiries regarding Cryptocurrencies is on the decline. The Agency attributed the downward drift to the long Crypto Winter. 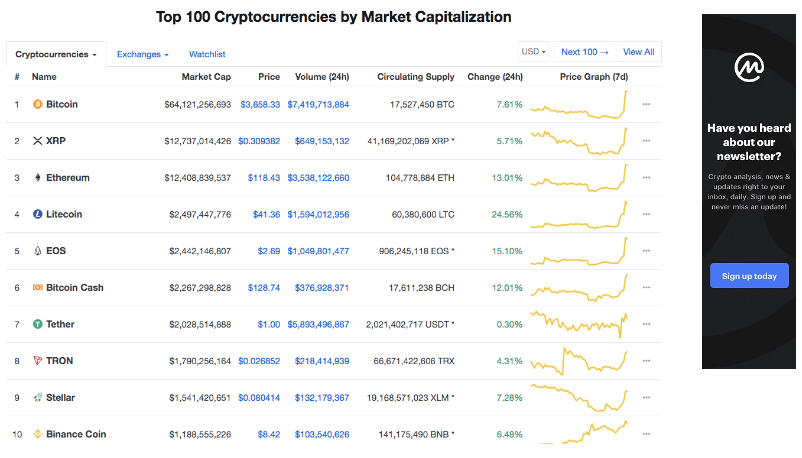 On top 10 on CoinMarketCap Friday evening, the massacre has disappeared and not even a single Crypto depreciated in value. Four coins were up more than 10 per cent.

#1. Market leader Bitcoin closed the week with a 7.61 percentage point to bring its price to $3512.10. As stated earlier on, it is a good sign of price stability for the week.

#2. Ripple maintained the 2nd position germinating 5.71 per cent. The bank transfer Blockchain giant was selling for $0.309382

#3. Smart Contracts pioneer, Ether didn’t disappoint at all finishing the week sprouting 13.01 per cent growth rate. The exchanges listed its price at $118.43

#4. The Coup d’etat of the week was Litecoin’s 24.56 per cent surge that engineered the ousting of EOS from the fourth position. At press time the price was $41.36 with a market cap of almost $3.4 billion.

#6. Bitcoin’s Hard Fork, Bitcoin Cash is the 7th most valuable Crypto garnering 12.01 per cent upward gains. The market price for the day was $128.74.

#7. On the 7th spot was stable coin Tether and the least appreciated for the day.. It gained 0.30 per cent to sell at a dollar.

#10. Lying at the bottom of the elite rank on Friday evening on CoinMarketcap was the world’s biggest exchange Binance Coin. With a 6.48 per cent jump, the selling cost of $8.42