As the last week of February 2019 began, the various cryptos were on a downward trajectory. This is after they had put up a Bull Run that investors hoped would occasion an upward surge in prices. After the drastic drop on Sunday however, there seems to be a price reversal in the works. In all instances, the long term Moving average is facing downwards and about to cross under the short term Moving average. This signals a Bullish outlook in the coming days.

Investors are upbeat that the current bullish outlook is more than a dead cat bounce. Most RSIs show steady investor sentiments after the short bearish rally on February 24.

Seasoned crypto analysts argue that the Altcoins are on a retracement drive, urging calm. Bitcoin’s inability to break above the current Resistance zone of $4000 has been attributed as having triggered the bearish run. The effect was rippled across the other cryptos given Bitcoin’s market dominance.

The top five cryptocurrencies according to market capitalization performed as follows: 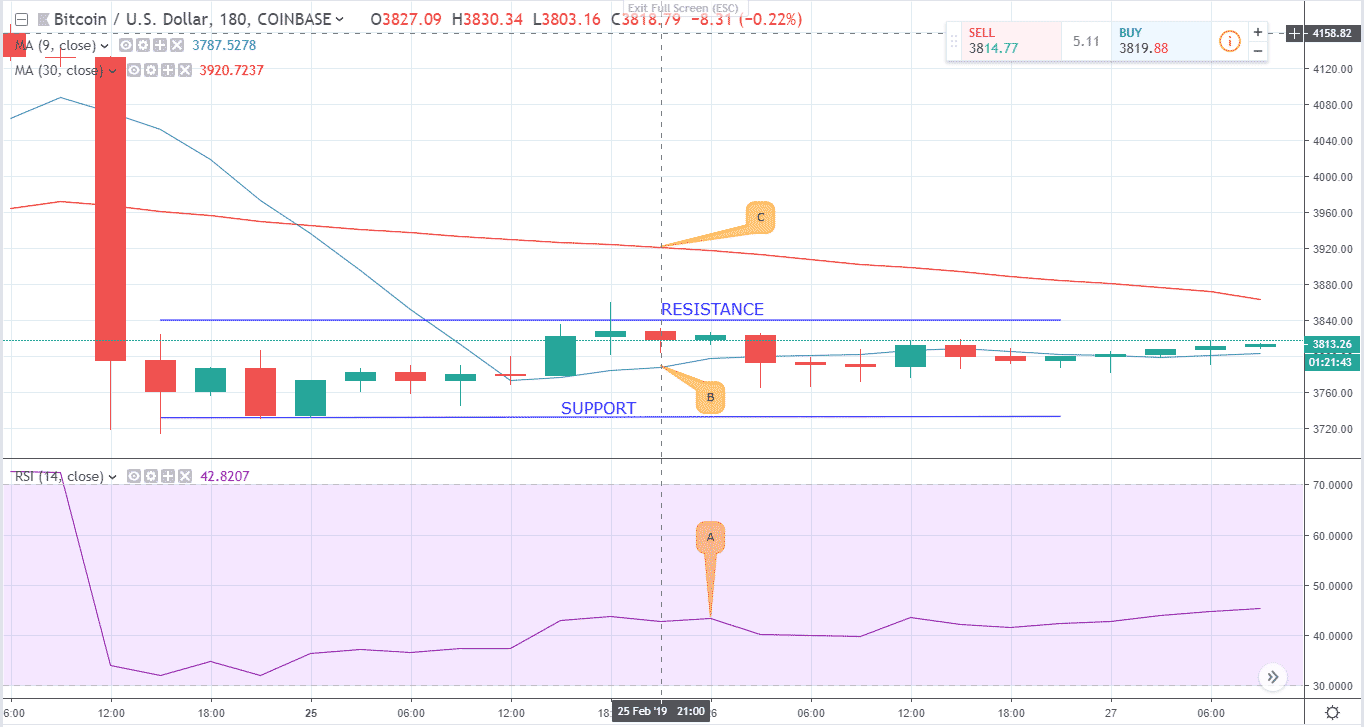 After a turmoil-ridden 2018 for Bitcoin, 2019 started off with high investor confidence. This was marked by a slow bullish run that gained track in February. Throughout the month, Bitcoin consolidated above $3500, hitting the $4000 mark before it came down to $3700. At the moment, Bitcoin is selling at $3800 with all indicators pointing towards a Bullish outlook in the coming days.

There is a steady investor psychology in the markets. Most people are opting to buy the dip which has had the effect of pushing the Relative Strength Index (A) upwards. 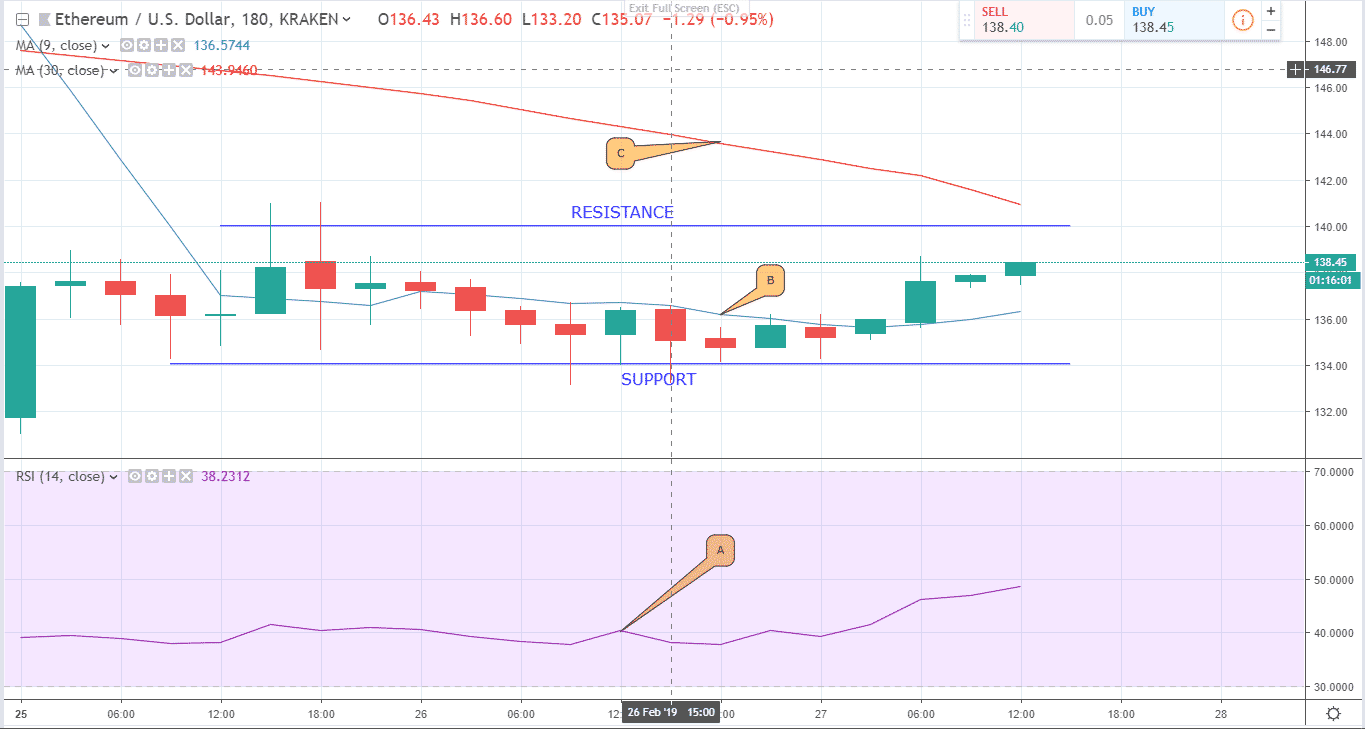 Like Bitcoin, Ethereum is on a Bull Run, having gained by 1.08% in the last 24 hours. Currently, ETH is trading at $137.49. The previous support level has been bettered and Resistance tested and breached severally.

In the markets, investors were quick to buy ETH during the bearish rally in anticipation of profits. This has been reflected on ETH’s Relative Strength Index (A) which is headed up.

At the moment, all indicators are in support of a Bullish outlook in the coming days. The 9 day EMA (B) is looking set to cross above the 30 day EMA (C) in a contracting triangular pattern. This means better prices are on the way for Ethereum. 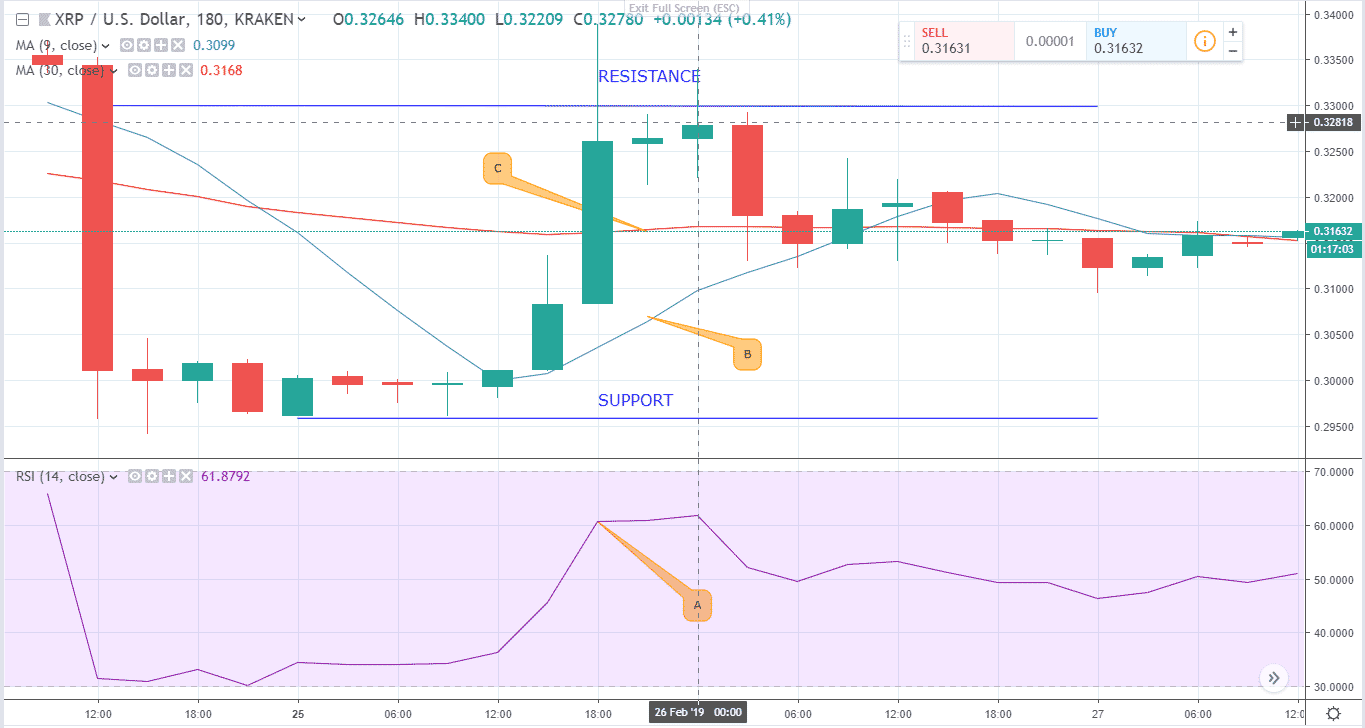 The XRP/USD pair has seen an array of ups and downs in the market as seen in the above chart. It took a dip on February 24 before bouncing off upwards. In the last 24 hours, the coin has seen its support come from $0.29 to $0.31. Also, the previous support has been breached as the coin heads up.

In the market, the coin is finding stability as it slowly attains consolidation as seen in the RSI (A). It sold $671 Million over the last 24 hours and has a market capitalization of $13 Billion.

All indicators point towards a Bullish outlook in the coming days. The 9 day EMA (B) has crossed above the 30 day EMA (C) which supports the upward rally. 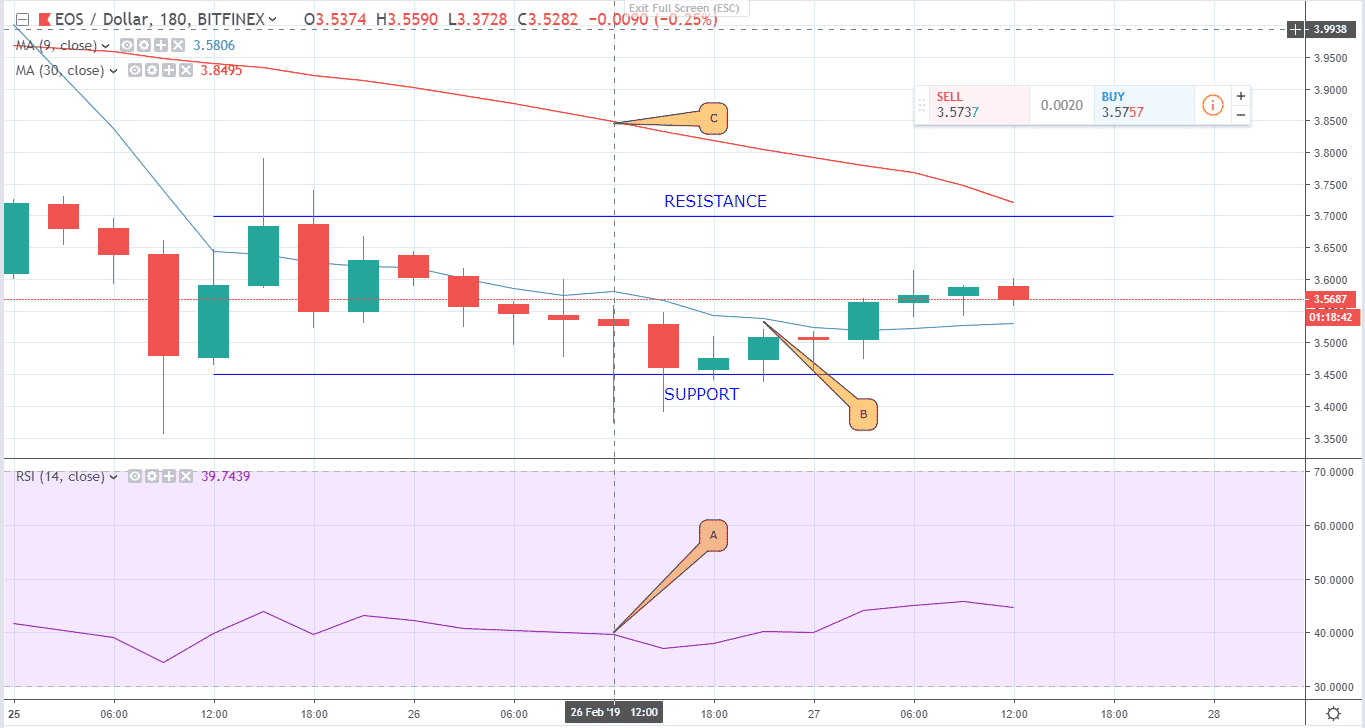 EOS stands fourth in terms of market capitalization at $2.78 Billion. Like most other coins, EOS is making attempts at a price reversal after it took a dip over the weekend. This has meant increased sales and buyouts as investors anticipate better prices. This is illustrated in the RSI (A).

Over the last 24 hours, the coin has gained by $2.18% and is trading at $3.52. EOS has found support at $3.35 and resistance at $3.69. This shows a strong price consolidation that supports a Bullish outlook in the coming days. 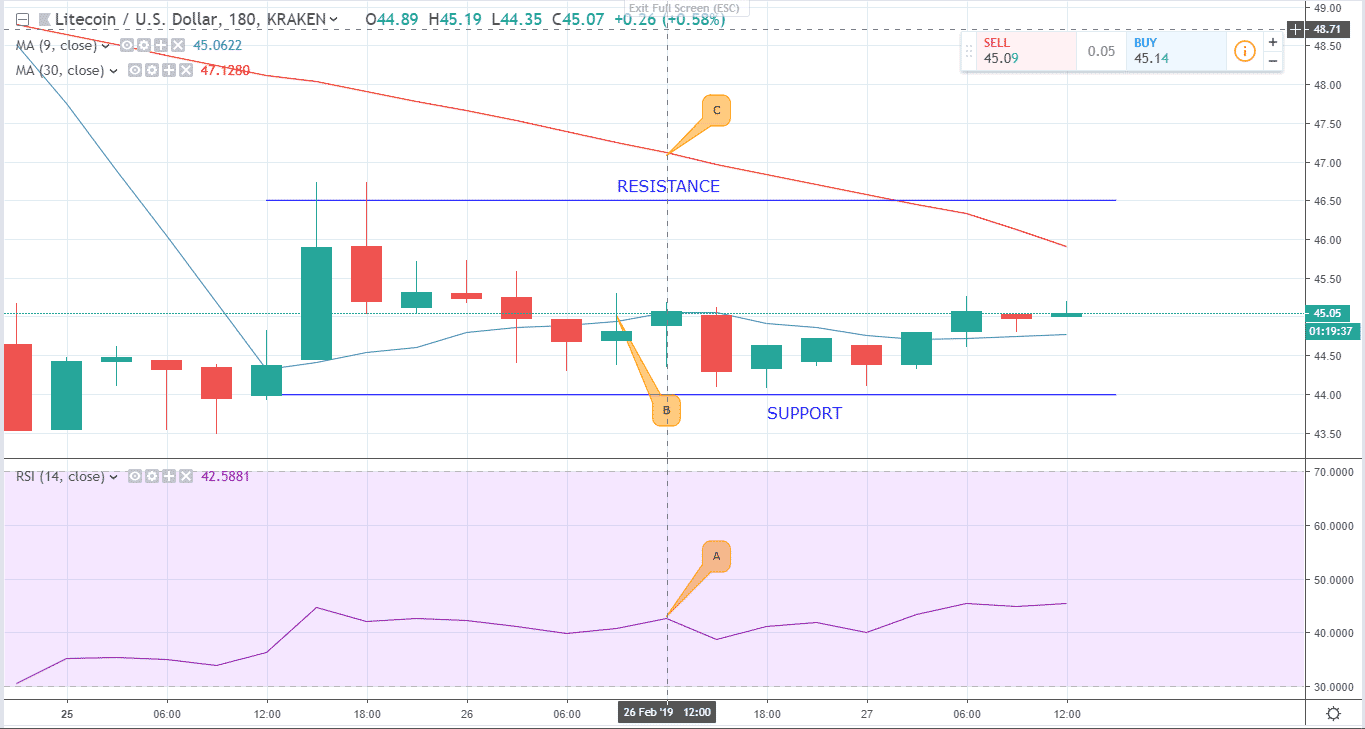 Litecoin is fighting off a strong bearish momentum that had engulfed it over the weekend. It is up by 0.5% in the last 24 hours and is trading at $44.89. This upward trend has brought about positive investor sentiments as seen in the RSI (A) which is headed up.

The DRIFE Platform Aims to Disrupt the Transport Sector

The DRIFE Platform Aims to Disrupt the Transport Sector