Dogecoin’s Value Began Its Significant Rise on December 16 When It Embraced Support at $0.0032

The cryptocurrency market is in red. BTC price drops to $22k lows after reaching the weekend all-time highs. Dogecoin’s value began its significant rise on December 16 when it embraced support at $0.0032. Today, December 21, Dogecoin (DOGE) rally took a new turn as Elon Musk pumps Dogecoin on Twitter. A flash rally sparks up DOGE/USD to $0.0055, causing it to gain over 30% within hours, reaching its highest level since July 8. DOGE upside momentum hit a brick wall causing it to capsize from $0.0055 high to lows of $0.0043 at press time. Dogecoin is presently trading at $0.0047. In spite of the price correction, DOGE is up by nearly 6% daily and 35.88% weekly. DOGE has an available coin supply of 127 billion, which is among the highest-circulating supplies of all coins. The coin ranks 43rd on the Coinmarketcap table, with a market cap of $561 million with $114 million in trade volume over the past 24 hours. Tesla CEO Elon Musk once again drew attention to the meme-inspired crypto triggering FOMO in DOGE price action. Elon Musk’s simple and one-worded tweet “DOGE” spurred a buying spree from Dogecoin enthusiasts, causing Dogecoin price to rise in a short-lived rally.

*Dogecoin’s value began its significant rise on December 16 when it embraced support at $0.0032
*DOGE upside momentum hit a brick wall, causing it to capsize from $0.0055 high to lows of $0.004300 at press time
*Tesla CEO Elon Musk once again drew attention to the meme-inspired crypto triggering FOMO in DOGE price action 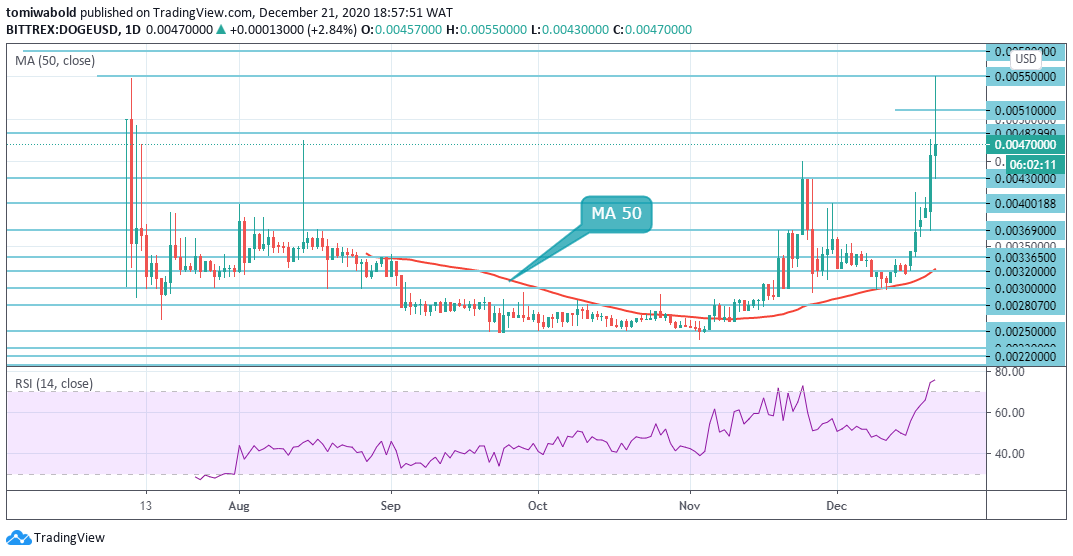 DOGE/USD is attempting a rebound after a plunge from an intraday high of $0.0055 to lows of $0.0043. The RSI remains in the buyers’ zone with a figure above 60. Brief consolidation may ensue for Dogecoin to regain stability. On the upside, if the advantage swings in favor of the bulls once more, Dogecoin price could climb above $0.006 considering if a break above $0.0058 holds.

Declines on DOGE/USD paused upon reaching the $0.0043 support. A bullish comeback may see DOGE/USD reclaiming the $0.0051 level and ultimately $0.0055. On the flipside, barring an extended sell-off, DOGE must avoid sub-$0.0043 levels. This region stalled DOGE recovery on November 26, causing massive declines to $0.0030 zones.