by KryptoMoney
in Interviews, News
0

Pizza Palace, a pizza eating joint located in Rajkot, the fourth largest city in the Indian state of Gujrat accepts bill payments in Bitcoins. The food joint is amongst the pioneers in the country to accept Bitcoin in the form of bill payments.

Founded by Vishal Vora along with his other two partners, Pizza Palace has three branches in Rajkot. The branch where they accept Bitcoins for bill payments is located at the First floor of Shanti Heights, opposite SNK School, University Road, Rajkot. 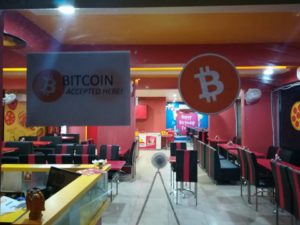 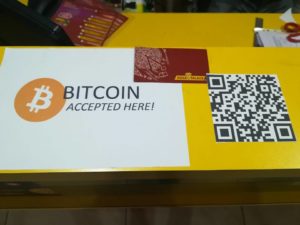 One of the team members of KryptoMoney.com had a conversation with Vishal and asked few questions regarding the Bitcoin acceptance for bill payments. Following are the answers provided by Vishal Vora on some of the questions being asked.

KryptoMoney: Why did you decided to accept Bitcoins as payments?

Vishal Vora: “The Unbound Measures of Possibility,Verge of changing the way we look to currency system & Possibilities of Going to the Moon”, This is the usual description i give when people ask me,”what is bitcoin ?”

Being a Crypto Enthusiast from the mid  2016, I always knew this will go on air,but at this rate,i never imagined,but after doing some online courses from Block chain Institute of Technology  & Studying Hundreds of Books on Blockchain & Cryptocurrency & getting good return with invested money,I was enlighten that this is much more than what i expected.This technology will go beyond our thought process.

And,I want more people to join this wonderful opportunity knocking on the door,And as said “charity begins from home”,We Started accepting payment from our own restaurant chain “Pizza Palace”.

KryptoMoney: Since when are you accepting Bitcoins as payments?

Vishal Vora: We started accepting Bitcoins as payments from 1st Nov,2017 and people have loved this concept. We are getting appreciation from all over the world for such bold steps. All though we have received criticism too, but frankly speaking, as per my observation most of the people who critics crypto-currency are the people who don’t have any particular knowledge about crypto currency. Once they go deep in knowing this.They will come up with the love toward cryptocurrency.

KryptoMoney: Till now how many Bill payments have you received in Bitcoins?

Vishal Vora: Only 2, but the eyes of customers are poping out after looking at “We Accept Bitcoin” sign boards. Customers are inquiring about “How can I know, More about Bitcoin ?” .

KryptoMoney : Generally what is the age group of people paying bills in Bitcoins?

Vishal Vora: People from all of the ages are showing interest in Bitcoins. 5 days after starting to accept bill payments in Bitcoin ,I had a very healthy discussion with one of our regular customer,who is 65+ and a Doctor by profession. He was telling me how he didn’t listen to his son in 2012,and rather invested in share market and not in bitcoin,and how much he regrets it now. But after seeing our sign,he was hopeful again,that this not the end line. It will keep on growing,and this year’s highest might be next year’s lowest,and next day I received a call from him that he has started investing in it,and next time when he will come,he will pay in Bitcoins only.

( Wasn’t that a great Bitcoin Story)

KryptoMoney: Have you partnered up with any payment gateway to convert Bitcoins into fiat currencies?  How are you showing your Bitcoin revenue in your books of accounts?

As of now we are using Zebpay to convert Bitcoins into fiat. From accounting point of view,Till now we were showing cash & bank a/c in our balancesheet. Now we have started showing Cash,bank & Bitcoin a/c as well. And as of we are not getting much payment in bitcoins so we are not withdrawing the bitcoins ,rather we are keeping it there to let it grow.

KryptoMoney : How do you see the future of Bitcoins in India?

According to Zebpay every day new 2500 users are joining this bitcoin movement,and everyday exisiting user are increasing their investment in bitcoin by ditching other instruments like SIP,share market,Mutual Funds, debentures or even saving accounts. Main concern is of government policy,lets see what RBI has to say regarding to cryptocurrency because ultimately it will decide the future of Bitcoin in india

KryptoMoney: Lastly, do you plan to accept more cryptocurrencies in future? If yes, can you name some of them?

Right now our main focus is to educate more & more people about Bitcoin,and many does not knows the exact meaning of Bitcoin. I heard the chattering between customers like,“Yeah,It is foreign currency”, “Can I buy bitcoin from paytm ?”, “Will police arrest me if I buy Bitcoin”,so before going into another crypto, as of now we are more focused on bitcoin only. So lets see how much time does it take to answer all this questions,after that we might think of jumping into another cryptos.

So this was Vishal Vora, who we thank for enabling India to eat Pizza and pay in Bitcoins. Well Pizzas and Bitcoin some real connections. A man ordered 2 Pizzas back in 2010 and paid 10,000 Bitcoins. Those pizzas are now worth million dollars.

Are you a business owner who accepts payments in Bitcoin too? Let us know at [email protected]