Ethereum’s major network upgrade, referred to as Ethereum 2.0, ETH2 or Serenity, will be marked by Sharding, Proof of Stake, a new virtual machine (e WASM) and other features. While it’s paramount to note that this upgrade will not occur once at a particular time frame- instead, it will be rolled out in phases.

ETH 2.0 was initially set to launch in January 2020 but due to implementation delays, July 2020 now seems to be its probable release date. The Testnet has been live since December 2019 and node clients have made progress since then.

Phase 0 refers to the launch of the Beacon Chain which will coordinate all 64 sidechains called shards.

The Beacon Chain will also manage the Casper Proof of Stake protocol for itself.

Vitalik Buterin ETH co-founder while expatiating more on phase 0 referred to it as the initial phase of the Ethereum 2.0 launch. This will release the proof-of-stake network, which he sees reaching the online community this year.

While the official launch date of Phase 0 is yet to be disclosed, Buterin explained that Phase 0 is close to having a multi-client Testnet and audits of the existing code.

Phase 0 Leaps Forward, What Next After?

Phase 0 made progress recently as Ethereum 2.0 had its preliminary audit of the protocol’s specifications, undertaken by Least Authority. The purpose of the audit was to fully understand the protocol and point to any loophole found in its design.

On a note of finality, the audit firm passed a stamp of approval on the specs referring it as very well thought out and comprehensive but found some limitations.

After this initial phase, Phase 1 of ETH 2.0 would be launched next, which will enable sharding. Every shard will act as a full PoS system, containing an independent piece of state and transaction history. Instead of processing all network transactions, each node will only process transactions for a certain shard.

If the phase is successful, sharding would render a solution to Ethereum’s scalability problem without compromising the network’s security and decentralized nature. The ETH co-founder stated that the transition will be completed once the ETH 2.0 network becomes fully robust, then Ethereum 1.0 will merge into the 2.0 system. 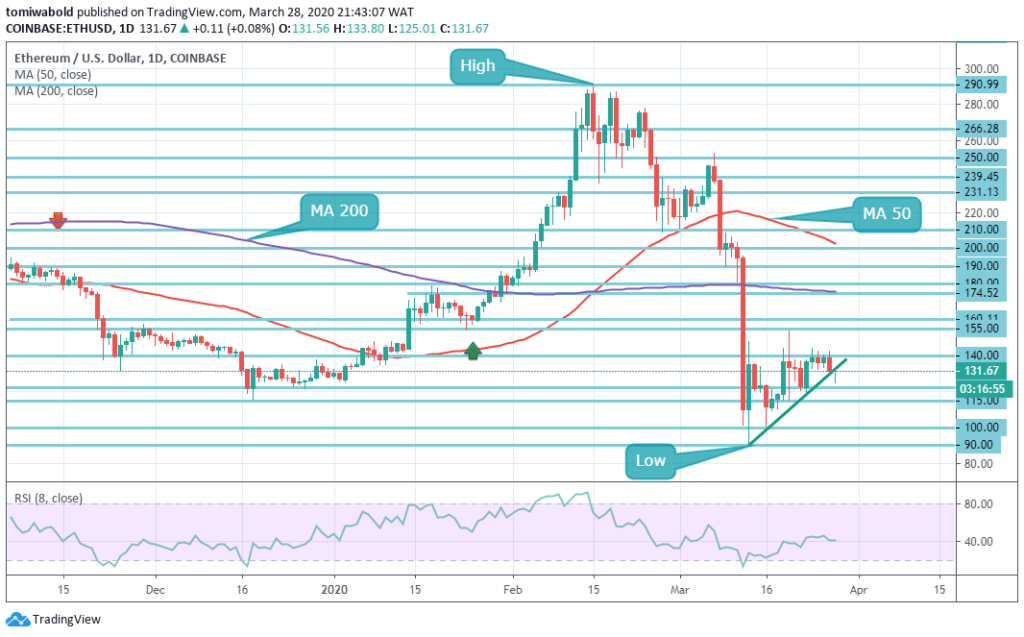 Ethereum, the second-largest digital asset with a current market value of about $15 billion, tested above $142.00 level in the prior session before receding to its current levels today. At the moment, ETH is exchanging hands at $131.67 level.

In the latest audit, two potential security risks were detected which are the block proposer system and the P2P messaging system. These features were noted to have attack vectors.

Also, they noted that there haven’t been any real precedents of a large-scale protocol using Proof of Stake and Sharding. Therefore, ETH 2.0’s long-term stability comes under question.

However, Carl Beekhuizen, a researcher on ETH 2.0 at the Ethereum Foundation explaining ETH sharding sees no chance for attack. He sees a process where validators attest to the block proposal (voting for a new block in the chain) every 12 seconds. In Ethereum 2.0, there is a minimum period of network existence, which is called a ‘slot’.

Validators are organized into committees while performing their duties. Thus, if one validator decides to attack the network from within, the proper performance of the committee is in a precarious state. To prevent such, a random shuffling of validators between committees seemed to be a more viable option.

ETH 2.0 May Take the Edge off ETH Defi Vulnerability

When ETH had a flash crash on Black Thursday, the outcome was devastating, users of MakerDAO lost millions of dollars, oracle prices lagged and applications like dYdX and Nuo had to change their fees to force through delayed trades.

As against investment advice of not putting one’s eggs into a single basket, in the DeFi sector, all eggs are in Ethereum, which controls the fortunes of DeFi apps and investors also. For instance, users of MakerDAO mostly use Ethereum as collateral. When ETH prices tank, users scramble to re-collateralize and the network suffers congestion. This makes the DeFi sector uniquely susceptible to market volatility resulting from fluctuations in Ether’s price and network congestion.

Buterin noted that while ETH 2.0 is undergoing testing and development, new scaling solutions are being innovated that are compatible with Ethereum and can solve some of its major challenges. For example, “Optimistic Rollups” are second layer constructions that allow smart contracts to scale. This innovation may help reduce ETH Defi susceptibility to market downturns.