Ethereum (ETH) Trading at This Juncture Implies One Thing, This Is What On-Chain Data Says

Ethereum Is Presently Trading at $351.65, Mostly Unchanged Since the Day’s Start

The second-largest crypto asset, Ethereum (ETH) has seen mixed price action since late September. After a rebound from lows of $313 set on September 23rd to hit highs of almost $370, ETH bears and bulls have remained in a dominance tussle.

At the start of October, ETH declined from its high of $370 in tandem with Bitcoin (BTC) which saw immense selling pressure due to the BitMEX saga and President Trump coronavirus infection. Ethereum had earlier set new year highs of $488 on August 31st.

An analyst noted that historically ETH bottoms in December and begin to climb in the first quarter of the new year. The pertinent question is what does this present trading level holds for Ethereum (ETH)?

Congestion on the ETH network has always been a source of concern, it was noted that Ethereum has become much less congested than it was just weeks ago but transaction fees are still far from cheap in comparison with that of Compound, MakerDAO, or Synthetix. 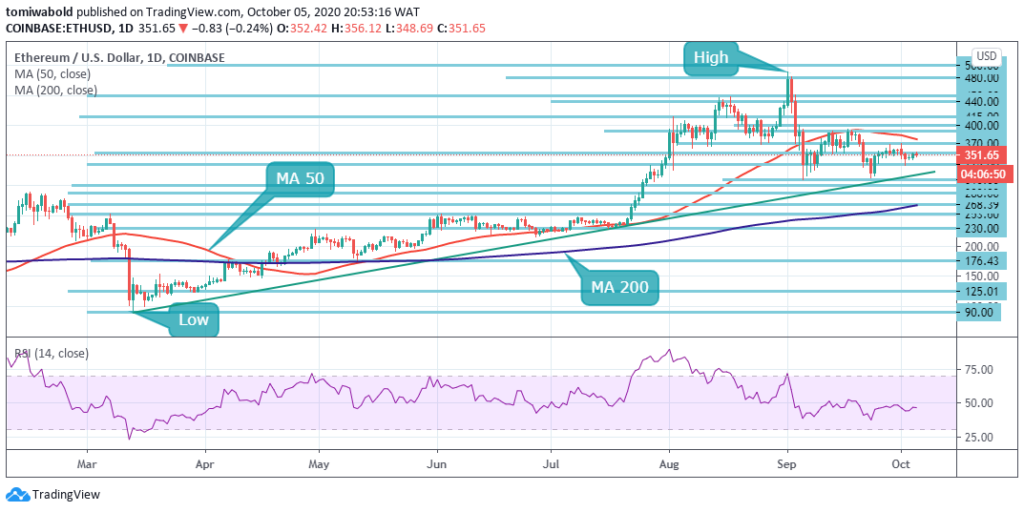 Ethereum is presently trading at $351.65, mostly unchanged since the day’s start.

(ETH) Trading at This Juncture Implies One Thing, This Is What On-Chain Data Is Saying

An analyst noted that Ethereum is recovering within an ascending parallel channel which might imply the asset may be on its way to $400 citing bullishness while noting that ETH is trading above an area of immense support. However, the resistance between $350 and $360 must come down for gains to $400 to come into the picture.

A technical analyst sees a crucial contracting triangle forming with resistance near $355 on the hourly chart of ETH/USD while noting that the price is trading near a major hurdle at $355 at which it might start a fresh decline. ETH at this juncture may either rally above $355 or it might restart its decline below $350.

IntoTheBlock’s IOMAP model is painting a bullish picture by indicating that the resistance towards $400 has significantly reduced. However, the resistance between $350 and $360 must give way for gains to $400 materialize. Here, almost 790,000 addresses bought nearly 5.3 million Ether. On the downside, ETH is trading above an area of immense support, beginning from $340 to $350. Here, nearly 654,000 addresses previously purchased 11.2 million ETH. It is unlikely that Ethereum will plunge beneath this region in the near term. However if this support zone gives way, it could plunge to as low as $310.

Ethereum 2.0 (also known as Serenity or ETH2) anticipated launch is in November. This will only be the first phase of the upgrade, meaning the activation of Proof of Stake. The introduction of a revamped EVM to support smart contracts will take place in the future.

ETH 2.0 is mostly viewed as a bullish event for ETH just like Bitcoin halving.

MicroStrategy CEO Sees Bitcoin As A Superior Asset To Gold

MicroStrategy CEO Sees Bitcoin As A Superior Asset To Gold