Thinking of Ethereum Mining? Do read this article

A lot of people are getting into Ethereum mining these days. Gone are those days when Bitcoin could be mined by a single person using his home computer. The Bitcoin mining is so competitive now that it requires sophisticated hardwares .

Ethereum on the other hand, still can be mined using standard home hardware. Also it is profitable as of now because the major population interested in cryptocurrency mining is still eyeing on Bitcoin mining.  Per transaction, Ethereum is still considerably cheaper than Bitcoin concerning mining costs.

But as the Ether price is rising exponentially, demand for Ethereum mining is also increasing. Cryptocurrency enthusiasts have understood that Ethereum mining has a brighter scope as Ether is gaining huge popularity.

As of now, Ethereum mining is also being done by a lot of people. Acoording to some reports, Ethereum energy consumption is more than the entire island of Cyprus, as well as Cambodia and Brunei. It could be consuming as much as 4.2 Terawatt-hours (tWh)

The statistics were  part of the resource’sEthereum’s Energy Consumption Index, released to track expenditure as the network prepares to transfer from Proof-of-Work to Proof-of-stake model Casper.

In a Twitter exchange between Barry Silbert and Ethereum co-founder Vitalik Buterin, Buterin also forecasted other benefits for network participants and investors once Casper was activated. 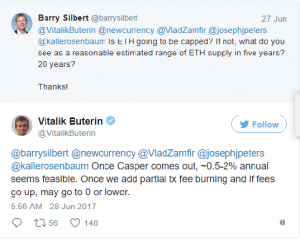 ETH token issuance rates, for example, could fall “below 0” in future, he wrote in response to a query from Ethereum Classic Fund creator Barry Silbert.

The Proof-of-Work model is highly critisized as enviormentally unfriendly as it consumes a lot of energy.

#Bitcoin and Ethereum energy combined together has surpassed energy requirements that of Jordan, Iceland and the Dominican Republic.

As Bitcoin and Ethereum are considered to be next generation of payment models, these are always been considered as more beneficial than traditional routes.