Ether or Ethereum, the second most valuable cryptocurrency is facing a huge price fall since past 2-3 days.

Ethereum was on a rising trend since the start of the year. The currency’s price has risen by almost 50 times this year. Experts believed the trend would not stop and Ether price will continue to rise. But due to some major incidents, the cryptocurrency had to take a U-Turn

This caused a huge dip in the price of Ether. Around $4 billion of market capitalization of Ethereum was wiped off.

Later on Vitalik Buterin uploaded a pic on twitter proving he is alive. He used a unique way of telling the world that he is alive. 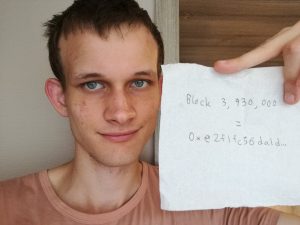 Ethereum network witnessed a huge traffic which put considerable amount of pressure on the network. This was due to recent rise of ICO’s accepting Ether in exchange of their tokens.

Similarly, During TenX token sale, a backlog of nearly 10,000 transactions were witnessed on Saturday.

As investors were facing difficulties in participating in ICO’s with Ethereum, Bitcoin was choosen to make payments.

Investors may have exchanged their Ethereums with Bitcoins in order to successfully participate in ICO’s. Though Bitcoin price was also decreasing, still it there may be some percentage of investors which would have choosen a comfortable way of paying in via Bitcoins rather than network delayed Ethereum.

The recent price fall is being considered as a healthy correction. Experts believed this was neccessary for future organic growth of Ethereum. Reduced prices will attract more investors and thus may boost Ether’s  price in coming few days.