Ethereum Was Biggest Gainer of 2nd Week Of February

The markets are not yet out of the red, but it was well composed this week compared to previous weeks. From Monday to Friday, market cap dangled between $120 and $121 billion.

However, at 23:00 midnight GMT, the total market capitalisation was hovering around $122 billion. Even though at the time of filing this report, most of the entities occupying top 10 on CoinMarketCap were in scarlet red irrespective of the $1billion gains.

Interestingly, the most refreshing news for the week was America’s biggest bank, JP Morgan’s announcement to issue a Cryptocurrency to speed up payment. The development took the industry by surprise looking at the bank’s animosity towards Crypto in the past years.

On the regulatory front this week, Indonesia approved digital currencies as a trading commodity. The country’s Commodity Futures Trading Regulatory Agency issued regulation No.5/2019 detailing the technical stipulations for the operation of cryptocurrency exchanges. 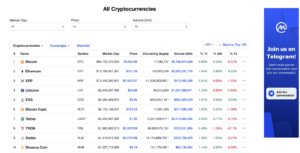 On top 10, per CoinMarketCap data, only two coins ended the week with good standings. The other eight entities couldn’t see the green with the highest depreciation of 8.11 per cent.

#1. Bitcoin’s price at the end of the week was slightly down from last week’s rankings. It recorded a price of $3,653.86 and lost 0.22 per cent for the entire seven days.

#2. Ethereum closed the week with an upward score of 9.22 per cent to become the highest gainer for the week. Selling at $131.26, the accumulations propelled it to recapture the 2nd position once again.

#4. At the 4th spot, Litecoin also depreciated by -4.80% but was sold at $463.68. Though it went down this week, it’s an improvement against last week both in price and market cap.

#5. EOS maintained its 5th rank from last week and was the only coin in the green aside Ether. Its market value was $2.85 accompanied by a profit of 3.22 percentage points.

#7. Tether was the least devalued and posted a price of $1 just as last week. The devaluation was 0.10 per cent compared to the 0.30 increase the past week.

#8 Though, Tron is still at the 8th placement, its performance was a far cry from the 4.31 per cent swell in the last rankings. It was the worst performed digital currency with negative 8.11 per cent and could be bought for $0.023709.