“Expect Bitcoin Downside to Be Limited”, Here Is What Analysts Are Saying on BTC Price Outlook

Bitcoin, the first and largest cryptocurrency by market cap, erased the prior week’s gains and fell below $18,000 amid its deepest weekly fall since late August. On December 1, BTC reached a new all-time high at $19,915 but upside momentum faded away as it neared $20,000. Presently, Bitcoin is in a relatively straightforward price range between $17,500 and $18,500 as it faces selling pressure.

The recent Bitcoin sell-off alluded to the fact that miners were selling large amounts of Bitcoin on exchanges. Cryptoquant indicated that BTC miners’ position index has reached its highest level in three months, which implies profit-taking. The same scenario played out in September, before Bitcoin’s plunge from $12,000 to $10,000.

Denis Vinokurov of BeQuant Exchange believes BTC selloff could have been further compounded by the burning of Wrapped Bitcoin (WBTC), which meant that BTC utilized in the Defi space was sold, secondly by hedging flow in the options market. 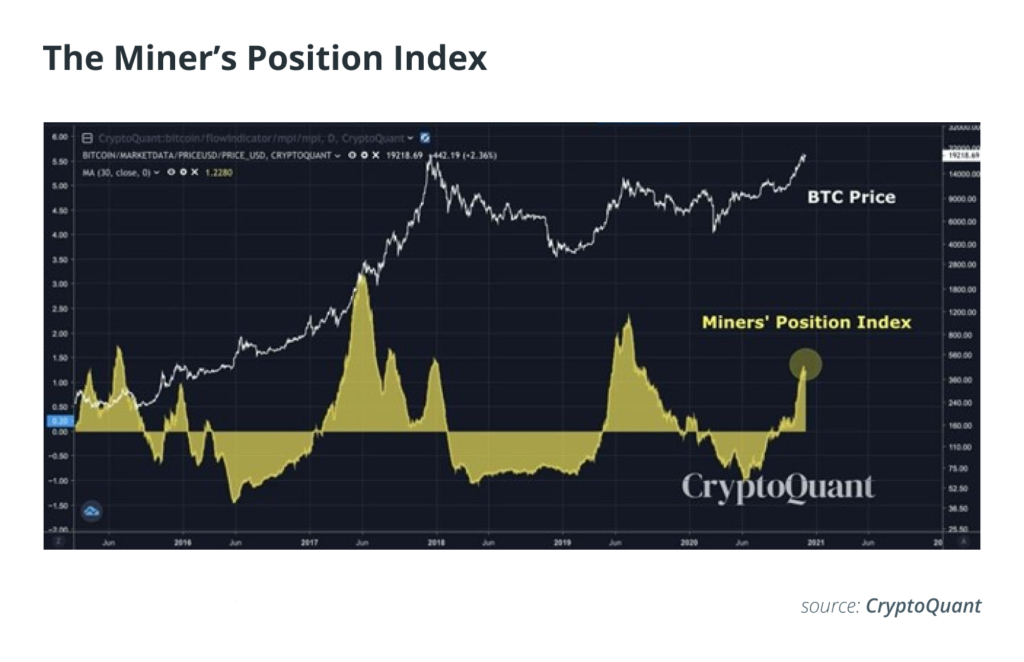 Participants at the Bitcoin Forecast Expert poll have bet on Bitcoin consolidation below $19,000 and do not anticipate a move to a new all-time high in the next three months.

An analyst noted that the BTC chart depicts a downtrend as shown by lower highs and lower lows. Further stating that generally, a downtrend will always make lower highs and lower lows until a clear bottom is found. Based on numerous bearish signals, including the potential distribution of funds on Mt. Gox users, another analyst believes BTC bearish momentum could snowball towards the end of the year.

However, Denis Vinokurov of BeQuant holds a slightly different opinion. He believes that BTC’s downside is limited in the short term and the outlook for December remains bright. He emphasized that the uncertainty surrounding Brexit and US stimulus will ultimately buoy Bitcoin as the appetite for risky assets can be restored:

“Uncertainty over Brexit and the US stimulus plan may be devastating at first, but ultimately positive. Thus, expect the downside to be limited and stability to recover.”

Guy Hirsch of the eToro exchange also holds a similar view on the aftermath of the recent BTC sell-off. He Stated that historically Bitcoin always posted a strong performance in December, thus he expects buyers to accumulate BTC during major dips.

For example, in 2017, Bitcoin faced turbulence towards the end of the year. But at the end of December, BTC rose to a record high of around $20,000. Bitcoin has since surpassed that figure but has failed to stay higher. If selling pressure on BTC eases in the coming weeks, BTC may end the year on a high note soon, Hirsch said. Hirsch reiterated that the long-term outlook for BTC is optimistic, saying that it makes sense for BTC to be “significantly higher” than it is now over the next 12 months.

Analysts point out that a break above $18,500 would mean a bullish short-term breakout and would set BTC to continue to rally. However, another drop below $17,800 would indicate that a short-term bearish trend could emerge. The pullback trend seen in the US stock market could mean that Bitcoin may stagnate for a while.

Will Bitcoin Value Double In 2021?

Will Bitcoin Value Double In 2021?