Five Notable Facts Emerge on Bitcoin (BTC) Downslide at $11,000, This Is What Traders Expect Next

Bitcoin However Has Maintained an Inverse Correlation With the U.S. Dollar Currency Index (DXY)

In the prior week, the first and largest crypto asset, Bitcoin (BTC) in a display of strength rallied from $10,250 to $11,180. After retesting the $11,000 key level on two consecutive times, BTC wobbled without strength in the face of resistance to trade as low as $10,180 today.

Not only Bitcoin saw the huge selling pressure, the entire crypto market followed in tandem with double-digit selloffs for most of the smaller-cap cryptocurrencies.

Bitcoin is presently trading at $10,466 as the entire market was swept across with paint of red. Interestingly, when the commodity, crypto, and equity markets took a plunge, the U.S. Dollar Currency Index (DXY) displayed strength. 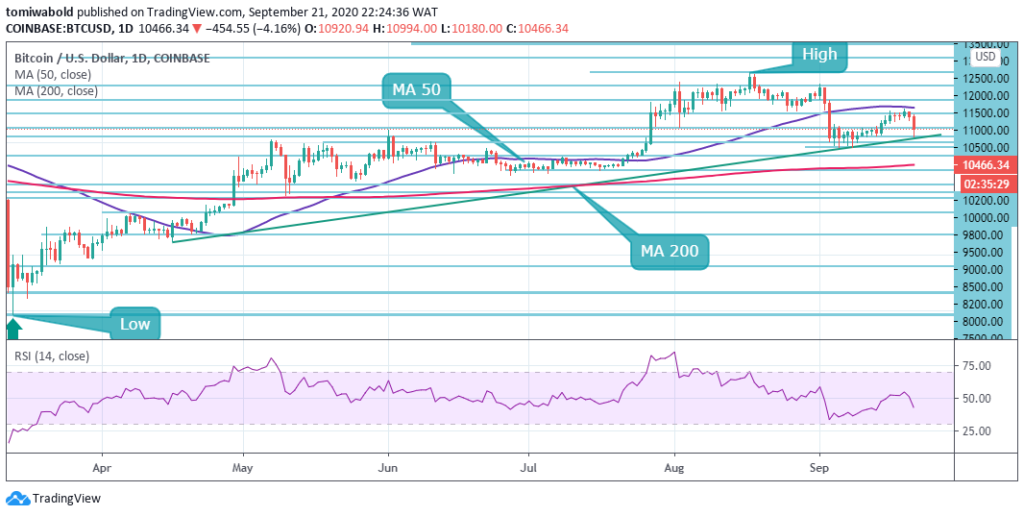 These five facts have emerged on Bitcoin (BTC) downslide at $11,000 while in the near-term, caution remains the watchword for Bitcoin traders.

1) Stocks Down As Coronavirus Takes a Toll
As Bitcoin took the weaker path today, stocks also traded down as seen in S&P 500, Hang Seng Index, and Stoxx Europe 600 falling by 1%, 1.5%, and 1.6% respectively at the opening bell. The S&P downturn alluded to the deadlock reached on the new coronavirus stimulus package and upcoming elections.

This week, Federal Reserve Chair Jerome Powell will testify before Congress to defend the economic policy update delivered last week which was met with skepticism.

However as Bitcoin correlated with stocks, safe-haven gold was up 0.1% against the dollar at $1,953.

2) Bitcoin Network Difficulty and Hash Rate Remain at Highs
Despite BTC cascading below $11,000, network difficulty and the hash rate remained at all-time highs. The difficulty grew by 11.35% at the latest automatic readjustment on Sunday. The next readjustment in 12 days is already set to add another 10.2%, stated BTC.com.

Meanwhile, the BTC hash rate set a fresh ATH of 143 Exahashes per second (EH/s) on Saturday.

3) The Markets Are in Red, While DXY Gains
Interestingly, when the commodity, crypto, and equity markets took a plunge, the U.S. Dollar Currency Index (DXY) displayed strength. 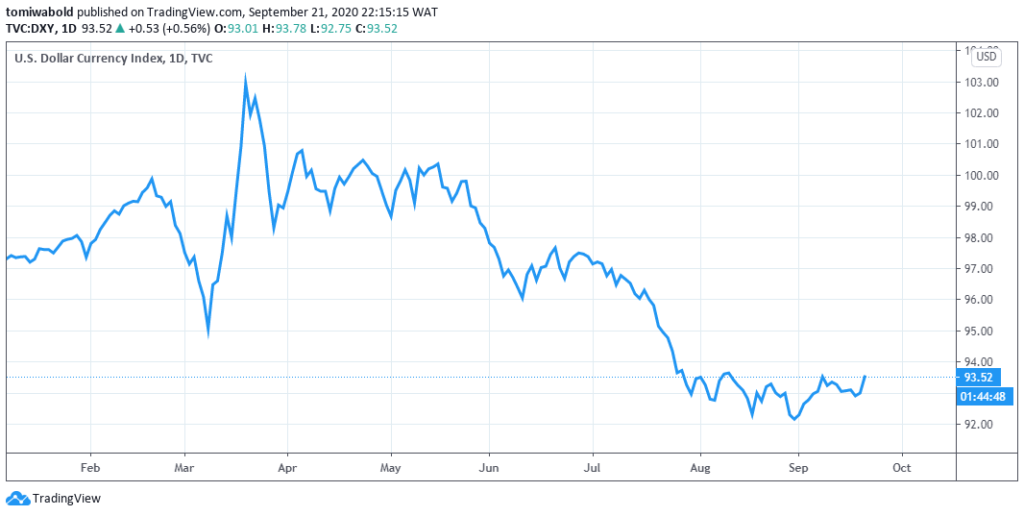 Renewed global fears regarding coronavirus added to this, with the U.S. Dollar viewed as a ‘safe’ haven.

During the crisis of 2000 and 2008, and even the recent market crash in March, the U.S. Dollar was seen as the strongest asset. Bitcoin however has maintained an inverse correlation with the U.S. Dollar Currency Index (DXY). 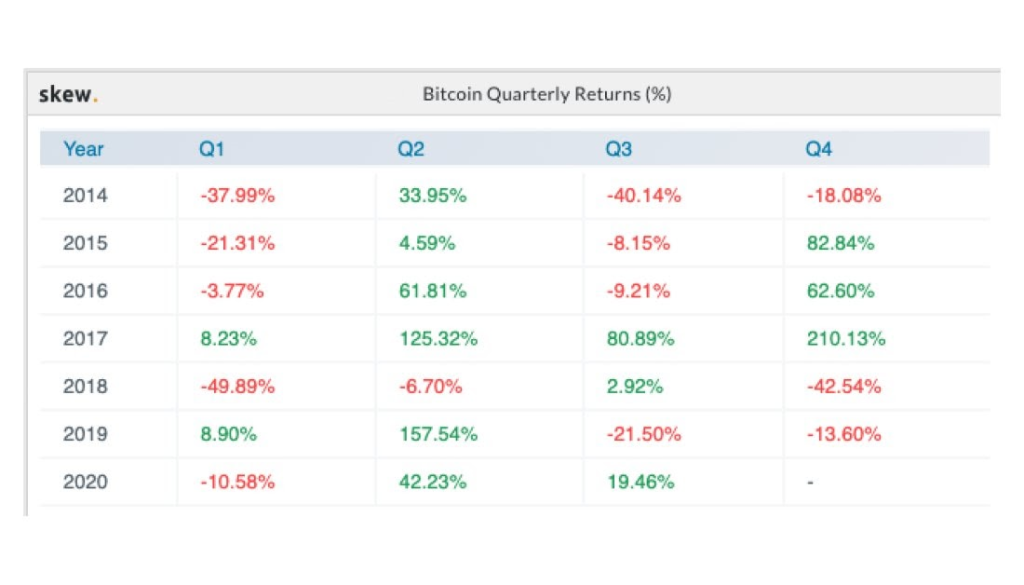 5) A Recovery in Sentiment From When Bitcoin Crashed on September 3rd
On September 3rd when Bitcoin conceded to the bears in a selloff, there was a dramatic shift in sentiment as Bitcoin plunged beneath $10,000.

Crypto Fear & Greed Index metric indicates that investor sentiment is broadly recovering now as the Index stayed within the “neutral” range of 48/100.

What Traders Expect Next

In the near-term, caution remains the watchword for Bitcoin traders while technical analysts are paying keen attention to $10,500 and $10,000 key levels for BTC price. A recent report stated that from the movement of whales, the $9,800 support region has weakened, which might lead to a bigger pullback.

One trader is optimistic that BTC’s ongoing selloff may soon come to an end, however, as he sees an indicator pointing to slowed downside momentum.

Edward Morra, a crypto analyst, said he remains bearish until BTC closes back above $11,000.

How Cryptocurrency Can Help Your Small Business?

How Cryptocurrency Can Help Your Small Business?

LTC Price Analysis: LTC/USD Gears Up for a Bullish Strike at $100, Pizzahut to Accept Litecoin for Payments

Stellar (XLM) Holds On to 120% Gains, Bitcoin and Altcoins Recovery Kicks Off but Its Time to Pay Attention

IOTA Price Analysis: IOT/USD Prepares for a Push Past $0.35 on the Anticipated Chrysalis Phase 2 Launch

“Expect a Bounce on Bitcoin but…” Here Is What Analysts Are Saying on BTC, ETH Price Outlook After Recent Crash