Co-Joined by Price Action, Here Is What Analysts Are Saying About Ripple (XRP) and Stellar (XLM) Bull Trends

XLM and XRP Have Been Noted to Follow Each Other on a Macro Scale, Rising and Falling Simultaneously

XRP, 3rd largest cryptocurrency and the native crypto token of Ripple, was previously ranked as one of the worst-performing assets after being caught in a bear market for almost three years.

The situation got intense as for each ray of hope and recovery, XRP kept on hitting lower highs and setting lower lows. This downtrend caused XRP to trade down at more than 90% from its all-time highs of over $3.50. XRP was noted to have traded as low as 17 cents in December 2019 with the ‘downside trauma’ reaching a crescendo in the March market carnage when XRP traded as low as 10 cents.

However, XRP woe tales turned around as it saw intense bullish action gaining as much as 50% to rank as one of the best performing cryptocurrencies in the last 2 weeks. During this period, XRP went ahead to reclaim its position as 3rd largest cryptocurrency by market cap after being earlier displaced by Tether (USDT) to 4th place.

Recently, Ripple announced that over-the-counter sales of XRP digital currency surged by 1,760 percent to stand at $32.55 million worth during Q2, 2020.

Stellar (XLM), 14th largest cryptocurrency by market cap and XRP’s closest competitor had previously suffered from the ‘downside trauma’, being ranked alongside XRP as one of the worst-performing assets after a stagnancy bout spanning over two years.

Both cryptocurrencies saw their bullish momentum slowed down afterward, trading in a triangular range in tandem with analysts’ opinion of a long-standing correlation between the two assets. 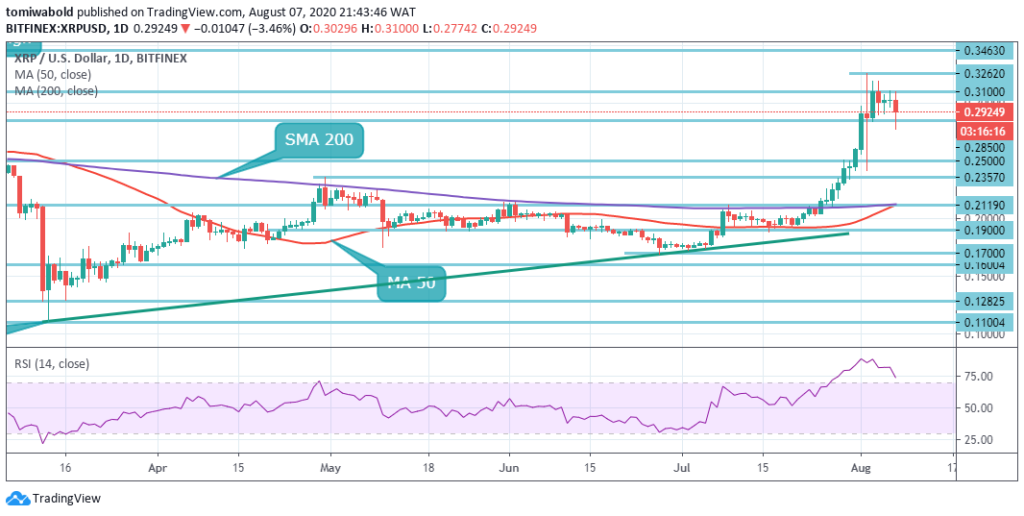 XLM and XRP have been noted to follow each other on a macro scale, rising and falling simultaneously. XRP is trading at $0.29 at the moment.

Bearing in mind that XRP has been in a bear market for almost three years, so it may not be an easy feat for XRP bulls to accomplish in a day. First, bearish momentum needs to be quelled, while positive momentum from bulls starts mounting. After bears and bulls grapple, then a state of equilibrium where supply and demand hit a stalemate is reached. Third, when the chances prop up once again in the favor of bulls, a fresh uptrend starts.

However, analysts still expect XRP to trend higher in the days and weeks ahead given that it has more room to grow.

A trader stated recently that XRP’s recent price action has formed a bull pennant, underscored by a bullish divergence. According to him, this is an indication, that XRP bulls may soon resume an action back pushing the price above $0.326. 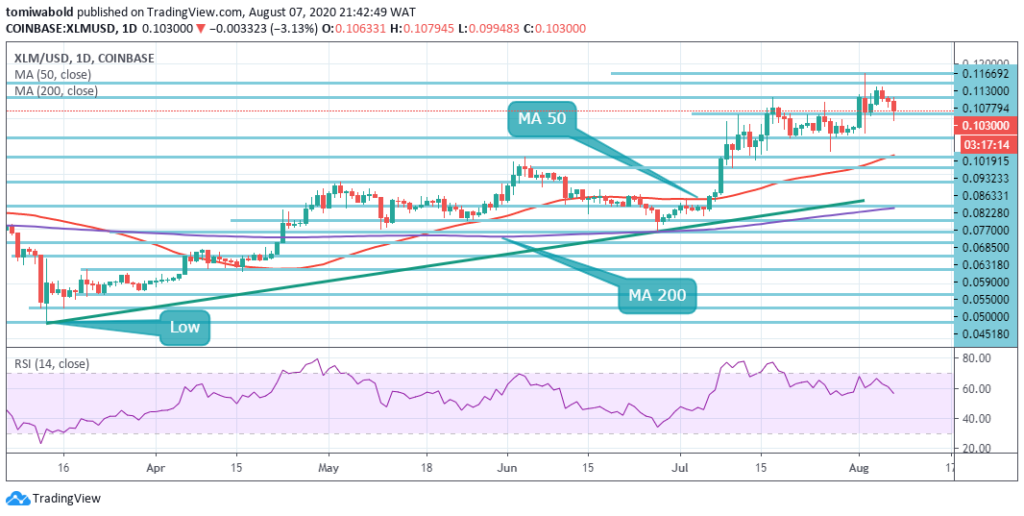 Stellar Lumens (XLM) is trading presently at $0.103. Analysts also have remained bullish on Stellar (XLM) drawing a correlation between the two assets.

A prominent analyst thinks that XLM is on the verge of a macro breakout. Reasons due to the “volume expansion” and XLM’s move above a one-year-long range, this he said:

“$XLM is still one of my favorites. Broke +350 days of accumulation range. Good volume expansion in the breakout. Break-in market structure. Currently retesting the accumulation range and making a new higher low.”

However, the bullish scenario of both assets holds no absolutes as there is a touted sentiment that all Altcoins except Ethereum will underperform Bitcoin. This may hold sway in the assets’ Bitcoin pairings.

A crypto trader stated that other times Bitcoin embarked on a bull run just as now, ETH/BTC rallied while XRP/BTC and other Altcoin pairs underperformed. Bitcoin dominance now is at 61% standing at 1yr low, XRP may overcome this hurdle if its fundamental strength is not tempered.