At the Time of Writing, Bitcoin (BTC) Is Trading at $9,481 While Still Caught in a Web of Indecisiveness

Top cryptocurrency by market cap, Bitcoin fell to the activity of the bears earlier as its price plunged beneath $9,000. The last it recorded such was in the latter part of May after its halving event. Then, Bitcoin’s selling pressure was traced partly to Miner’s capitulation whose revenues dropped due to halving.

Bitcoin’s earlier plunge beneath $9,000 heightened investors’ speculation as the Crypto Fear and Greed Index indicated a move into the “fear” zone.

Despite the cryptomarket being in a furor, the mainstay here is that Bitcoin is currently trading above a key support level which may forestall a further decline. Analysts presume that if Bitcoin breaches this key support level, the bearish impulse may drag BTC price towards $8,000 or probably as low $6,000. 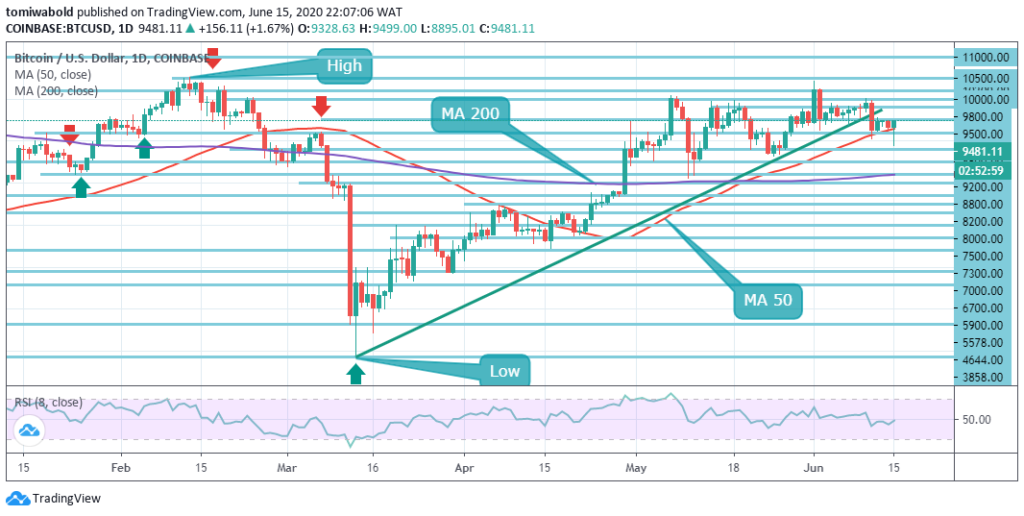 In a ray of positivity, giant global bank, JPMorgan Chase in a recent analysis made mention of Bitcoin’s ‘strength’ amid the huge sell-offs in the financial markets during the March carnage, Bitcoin has traded averagely at $9,500-$9,800 regaining 140% after the March incident. The Bank’s view purported the belief concerning cryptocurrencies as a financial mainstay is in place.

Also, recent data indicate the number of Bitcoin whales is increasing steadily which is a note of positivity around the crypto asset. From historical antecedents, a progressive accumulation rate could be a catalyst for an impending bull run.

At the time of writing, Bitcoin (BTC) is trading at $9,481 while still caught in a web of indecisiveness. Clarity on Bitcoin’s next move will be elucidated when it either breaks beneath the $9,000 support level or breach above the $10,500 resistance.

On-chain metric, IntoTheBlock’s “In/Out of the Money Around Price” (IOMAP) model reveals that Bitcoin is currently trading around a strong resistance zone which may forestall any upside movements.

The IOMAP model noted that the range between $9,460 and $9,730 constitutes a critical resistance zone noting that around here nearly 1.8 million addresses bought over 1.2 million BTC depicting a massive supply wall.

If Bitcoin bulls drive price past this key resistance level, BTC may retest the $10,500 highs it set mid-February or possibly set fresh yearly highs of $12,000. Although this will largely depend on the resilience of the $9,000 support level shown by its capacity to withstand huge sell pressures in case of such a scenario.

Santiment recently indicated that Bitcoin whales which refer to the number of addresses with millions of dollars in BTC are rising steadily rising despite BTC’s price activity. It also stated that since the start of June, BTC addresses holding between 100 and 10,000 BTC has jumped while giving the number of new Bitcoin whales to be seventy-five.

This may be quite significant considering the enormity of the BTC holdings in question, as just one large order could influence the market price.

If the rate at which Bitcoin whales are accumulating at every dip is sustained, BTC bulls may resume an uptrend for the crypto asset.

BitQT Review 2020: Is This Software Legit?

BitQT Review 2020: Is This Software Legit?