The first and largest cryptocurrency by market cap, Bitcoin (BTC) resumed an uptrend after plunging to lows of $14,310 earlier in the week. Bitcoin finally hit $16,000 after several attempts to squash the key resistance earlier. The trend seems to favor the bulls after BTC managed to flip key levels such as $15,000 into support.

Although Bitcoin’s visit to $16,000 was shortlived due to a rejection, the flagship asset remains in an uptrend as seen on the weekly and monthly charts where it is rising without major pullbacks. Analysts are confident that this latest leg will drive Bitcoin toward $17,000 or even $18,000. With history colliding with timing, three factors seem to be in favor of a broader rally as Bitcoin eyes its December 2017 all-time high of nearly $20,000.

Three Factors Suggest a Broader Rally May Be in the Offing

History Coincides With Post Halving Cycle
Historically, it was noted that BTC saw a prolonged rally when its monthly candle closes above previous candles.

On BTC’s high time frame pattern, Bitcoin’s monthly candle in September closed above $13,000 for the first time since 2017. BTC started showing signs of an uptrend in September.

Also in terms of the broader BTC rally narrative, the timing for a new Bitcoin rally seems appropriate as Bitcoin is presently in a post-halving cycle. BTC typically rallied 14 to 16 months after prior halvings. Hence, a new high for the next major rally in mid-2021 would be historically relevant.

Fundamentals
Bitcoin may be geared for a broader rally as fundamental trends align in favor of growth. The hash rate has surged around 60-70% in recent days.

Another instance of growth seen by the flagship asset is the type of new investors moving to gain exposure. Billionaire investor Stanley Druckenmiller is the latest mainstream macro investor to bet on Bitcoin. He follows in the trail of other prominent investors like Paul Tudor Jones and multiple publicly listed corporations like Square and MicroStrategy.

Consequently, it was also noted that investors’ perception of Bitcoin is noticeably improving as a growing number of large companies and billionaires add BTC to their portfolios. 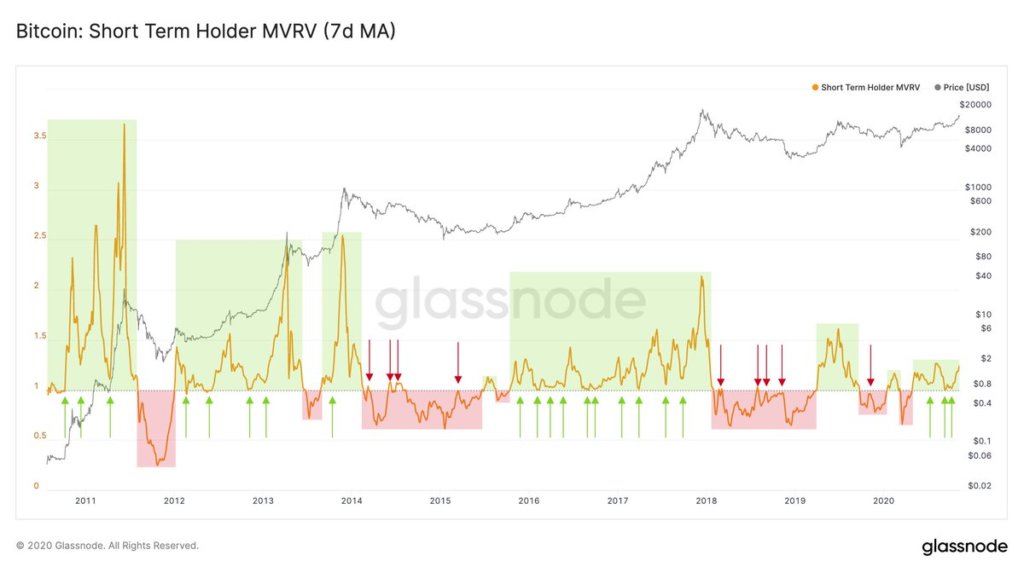 On-Chain Metrics
Two pieces of on-chain data are working greatly in Bitcoin’s favor. The on-chain analytic firm, Glassnode noted that BTC Short-Term Holder MVRV has held its “positive ratio” for 6 months now and is continuing to hold above what they call the “neutral line.” This was noted to be a historical emblem of it entering a full-fledged bull market.

Second, Bitcoin’s (BTC) purchasing power is nearing its highest level since the 2017 bull market, offering yet another indicator of a BTC broader rally.

The global Bitcoin purchasing power index, or PPI, which estimates how many McDonald’s Big Mac hamburgers you can buy with 1 BTC, rose 0.2% to 6,341.26 on Wednesday.